Warning: count(): Parameter must be an array or an object that implements Countable in /homepages/45/d96662078/htdocs/clickandbuilds/TheBackseatDriverReviews/wp-includes/post-template.php on line 316
↓
Home→Time Travel→All the Time in the World: Twin Peaks and the Impossibility of Laura Palmer

The first season of Twin Peaks is a bit like an addiction for me: if I start one episode, I must absolutely binge watch it until I get to the end. I explain this by drawing a parallel to Eric Cartman hearing the first few words of Styx’s “Come Sail Away” – once it starts, I have to finish it. Season two, not so much – really, the character James is pretty pointless and his portrait is, how shall we say, the opposite of strong and compelling. Season one, though, game on. It’s fascinating, particularly in one area: how in the hell did Laura Palmer (Sheryl Lee) manage to cram so much into one day? 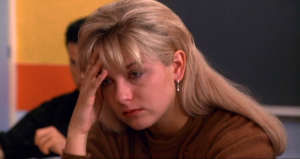 I need a pick-me-up too, Laura.

I mean, really, how did she have the physical time to accomplish everything she was getting up to? To really gain an appreciation for this, let’s do one of the things I hold dearest in this life – to the bulleted list! Onward! Laura’s activities include:

To put this into perspective, Laura is 17 when she dies. So that entire list is accomplished by someone who can’t legally buy lottery tickets or cigarettes just yet, and has a restriction on her driver’s license that means she can’t be on the road after 9 PM unless accompanied by someone over the age of 18. 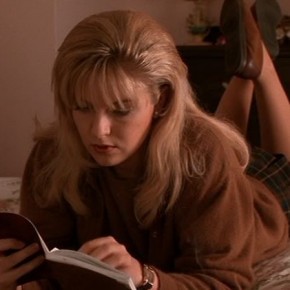 Have to admit, even for a David Lynch creation – which, by its nature, suspends most disbelief in anything making the tiniest bit of sense in the most batshit way possible – I’m left scratching my head. I can get the demonic possession by BOB or the Dark Lodge. I can totally buy the intrigue of the wood mill and the doppelganger cousin Maddy (which, for the record, is a goddamned shame, because slapping poor Sheryl Lee in a busted wig, throwing on a pair of oversized glasses, and making her speak in a fake-cute voice is just insulting to her AND to us). But the thought that Laura can accomplish anything more than three items on that list is just absurd to the point of completely jarring me from that warped little reality. The intensity with which she engaged in each interaction is completely draining: make no mistake, Laura is not half-assed in the least. This is someone who was perceived as perfect, who gave 110% in everything she did. Laura wasn’t coasting by – she was the best at everything she tried. The best little volunteer/tutor/student/daughter/hooker/girlfriend/secret girlfriend/best friend/therapy recipient/homecoming queen in all of Washington. 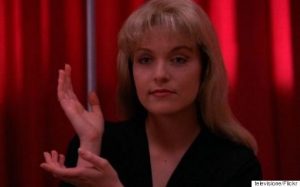 If you’re overstretched and you know it clap your hands…

So what’s her secret? In the immortal words of Rick James, “Cocaine’s a hell of a drug.” However, I’m not inclined to think that this is the entire secret of her success. After all, the amount of coke Laura would need in order to maintain the level of energy she required for that lifestyle would have resulted in a nose that collapsed long ago – seriously, that cartilage would have packed it’s bags, grabbed the kids and hauled ass to momma’s place after the third affair whilst maintaining a 4.0 grade point average. Physically, she would have hit the point of exhaustion early on in this process. Laura wasn’t just leading a double life – she was leading a quadruple life. Something has to give, and it’s typically the one-two punch of the mind and the physical appearance. And yet, she was able to maintain the outside semblance of sanity as well as eyes devoid of dark circles or heavy bags. 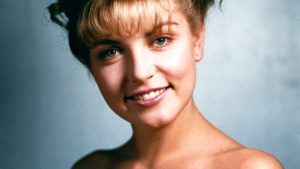 Unless if Laura Palmer had gotten her hands on Hermione Granger’s time turner or had a secret TARDIS tucked away in that locket, I don’t see how she could have done it. It’s just not possible. The obvious answer is “David Lynch,” which seems to make the most sense out of this entire mess. However, this woman just ain’t buyin’ it. I can buy most of the intrigue, most of the sullied human relationships, most of the supernatural elements. However, I can’t buy this. There’s just no way in hell that someone can do that much.