So, last week was a little unexpected in terms of absence.

Here’s the skinny. About a week and a half ago, Rochester got hit with a wind storm. This storm knocked out power for most of the city; luckily, I didn’t lose power. However, while at my place, one of my kids came down with that nasty stomach virus that’s been going around. When I say it was bad, I mean that there was no food going into this paper-white child for two solid days. It was a mess. She cleared up, but then on Sunday, I got hit with the same thing. At that point, I decided to throw in the towel and take the week off. I’m glad I did, because at that point, Rochester got hit with a massive snow storm that left the city buried between two and three feet of snow depending upon where you live. So basically, it was like the Stephen King short story “Strawberry Spring,” minus the serial killer. 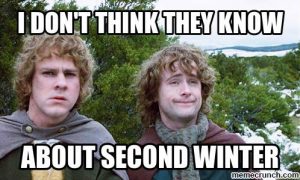 Welcome to Rochester, where we have but two seasons: winter and construction.

This week though, we’re back. Wednesday will see an analysis of Kiki’s Delivery Service, because Studio Ghibli is the best. Thursday is going to see a recommendation for Alice Through the Looking Glass, which I liked despite myself. We’re also gearing up to hear from Dan and Talicia soon, so be on the lookout!  In the meantime, hunker down and grab some elevensies. You never know when you’re going to need them.