Warning: count(): Parameter must be an array or an object that implements Countable in /homepages/45/d96662078/htdocs/clickandbuilds/TheBackseatDriverReviews/wp-includes/post-template.php on line 316
↓
Home→Horror→Outside the Box: Rape in the Films of Fede Alvarez

Sexual assault is never a fun time, yet there seems to be a contingency out there that functions under the thought process that the issue of not giving consent is somehow negotiable. It’s a devisive issue that’s not lost on filmmakers: we’ve seen it getting addressed in cinema throughout the globe, most notably in the French New Extremity movement coming out of Europe. Interestsingly enough, though, the notions of rape on film that are consistently portrayed involve only one kind of rape: an unwilling woman that has full on penis-in-vagina intercourse forced upon her. Director Fede Alvarez, though, doesn’t see this as the only kind of violation that can be endured, and explores it in not one, but two distinctive scenes in his films: the tree rape scene of 2013’s Evil Dead, and the infamous turkey baster scene of 2016’s Don’t Breathe.

Evil Dead sees drug addict Mia (Jane Levy) battling a heliish version of herself in the woods once the Book of the Dead has its invoking passages read aloud. Ultimately, we’re supposed to see the damage that her addiction has done to both herself and others: it’s the evil version of herself that must be conquered, one that has the power to physically maim and kill others. However, it’s this nasty cycle of addiction that arguably does the most harm to Mia. As the demonic manifestation of Mia silently watches, the young woman’s legs are held apart and a thorned vine snakes its way up in between the apex. Alvarez doesn’t have to graphically show us what’s happening: he infers it, as though it’s too horrifying for the audience to see. Instead, we get to put the pieces of the scene together: we see how spiked, nasty and painful those thorns look. We cut back to Mia’s face, frozen in pain and horror, her mouth hanging open. We infer that the thorns are traveling into what we all know is a very sensitive area. We’re cringing at the thought of numerous unwanted sharp objects scraping and tearing this poor woman’s vagina. Alvarez is smart in this respect because we don’t need him to show us Mia’s violation in up-close, graphic detail: we can picture it ourselves, and it’s something that makes us uncomfortable, in part because that string of thorns seems never-ending. We wonder how much this poor woman can take. We wonder how badly it hurts. We wince. The unintentionally funny aspect of the original Evil Dead is completely lost here. This is a clear violation of this woman’s body: she’s being penetrated unwillingly, and the object doing so isn’t a penis. It’s hurting her, she doesn’t consent, and we want it to stop. 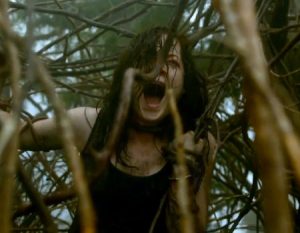 In a similiar fashion, Alvarez goes after the same type of violation – penetration with a foreign object – in Don’t Breathe, selecting a turkey baster instead of thorns as the weapon of choice. As Rocky, Levy once again gets to be threatened with violation on screen by Stephen Lang’s Blind Veteran. His reasoning is even more horrifying than the notion of demonic possession: Rocky’s actions accidentally cost him the unborn child he was orchestrating in retribution for the untimely death of his daughter, which, in his mind, meant that he required Rocky to carry the replacement baby. According to the Blind Veteran, though, he wasn’t going to rape her; he was merely going inseminate her because only real monsters fuck women when they say no. How gentlemanly. Instead, he pulls out a turkey baster and cuts a hole in her pants to start cooking up some baby soup, because apparently, that’s an acceptable compromise to forced sex. This one gives us two issues: rape and forced child-bearing, both of which the audience reels from as it unfolds in front of us. The moments are tense and well-done: we watch a handcuffed Rocky get hoisted in the air. We listen to her scream. We watch her struggle, kicking her feet in the air, knowing full well that she’s not going to wiggle her way out of the harness that’s got her dangling. In what’s arguably the most uncomfortable two minutes of 2016 on film (and this is coming from someone who hasn’t seen Raw yet), we watch a woman get told to her face that she’s not about to be raped while someone is bringing a tube full of sperm to her unwilling body. We’re scared that she’s about to get penetrated in front of us. It’s not sexy; internally, we’re screaming right along with Rocky because we know that this is wrong.

The most fascinating part of this scenario: there’s no phallus involved, shifting the talk away from traditionally-perceived methods of sexual assault and more toward some of the variations that some consider a gray area. In most states, rape includes several components in its defintion: everyone recognizes unwanted sexual intercourse, but some states in the United States go much further by placing age, penetrative object and state of consciousness into their consent laws. However, some still swear up and down that rape is about sexual intercourse, and that if a foreign object is used, it’s not really rape – it’s just an unfortunate incident that happened to involve some girl getting something stuck inside of her. Nevermind the fact that it’s discounting the possibilities of rape for a man – this limited perception is one that’s still held by short-sighted folk to this day. So what does this have to do with two horror films? Alvarez is challenging the audience to broaden their perceptions of what constitutes sexual assault. There might not be intercourse, but there’s a distinctive penetration event happening to a woman that expressly makes it clear that the contact is unwanted. These women are left helpless in front of our eyes. As viewers, we’re left in an equally helpless stance: we want to help these women. We want to reach through the screen and save them. We don’t want them to undergo the pain and humiliation. We don’t want them to hurt. We recognize that this is bad, and we want it to stop. 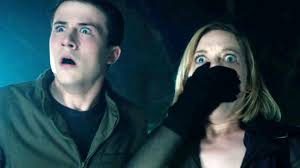 I made that face too.

Alvarez repeating this motif in both of his feature-length motion pictures is not coincidental. He wants us to talk about this. He wants us to feel the horror of losing control over your own body and what happens to it. It’s felt acutely: as spectators, we’re uncomfortable with this, driving home that true horrors can happen when you say no and someone else says yes, even if the act of violation is not completed by a body part. While there’s symbolism involved in both of his examples – the destruction the ill self and the need to seek revenge at all costs – Alvarez makes it clear that these women belong to themselves. We’re on their side. And maybe, just maybe, we need to stop and listen to the men and women that are assaulted around us every day without throwing around the technicalities of their traumas. Lack of consent is lack of consent. Period.