Warning: count(): Parameter must be an array or an object that implements Countable in /homepages/45/d96662078/htdocs/clickandbuilds/TheBackseatDriverReviews/wp-includes/post-template.php on line 316
↓
Home→Animated→Weekend Movies: Five Reasons to Watch Aggretsuko

One of the fun parts of having a geek kid: she’s really taken a shine to anime. As such, I get to try out new things in the name of science, to preview if they’re okay for a 10-year-old. Yeah, that’s it – it doesn’t have anything at all to do with me wanting to watch something. I definitely don’t want to watch an anime about an anthropomorphic red panda who chases away the blues of office life by singing heavy metal. Yep, that’s the premise of Aggretsuko, a new series on Netflix. Clocking in at about 15 minutes an episode at ten episodes, you can plow through it like it’s a long movie. Here are five reasons to watch it this weekend. 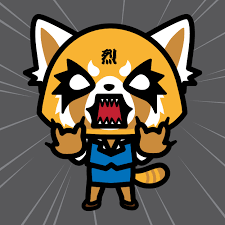 #1 – The crushing experience of working

Okay, first world problem time: work can really destroy your soul. Yes, you should be happy to have a daytime gig, but the key there is balance – you need something else there in order to make sure your life has more than one facet. If all you’re ever doing is working, that’s a tough gig, and that’s where the hatred and apathy comes in: it’s all-consuming, which leads to obsession. We get to see that in Aggretsuko. It’s a nice reminder to get a work/life balance.

Retsuko, the adorable red panda the show centers around, has an INSUFFERABLE boss. He’s sexist and overloads her at the slightest provocation. He yells and screams, and no one calls him on it for mistreating his staff. The worst part of watching this character is having a flashback to a boss like this: someone who thought they were doing you a favor by being hard on you, but uses that excuse as a reason to power trip. It’s traumatic to relive this treatment, but it’s comforting to see others go through this too. It’s less isolating, and the one thing an asshole boss hates is strength in numbers. 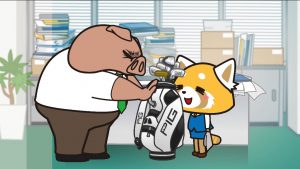 We’ve all worked for this person.

Some people hate metal, and they’re allowed; I happen to hate country (#fightme). I enjoy metal. It’s impressive how these people can achieve the low, guttural screams and still have a throat intact afterwards. Retsuko gets out her aggression and frustration by screaming metal into a microphone at a karaoke bar after work, and in context of her dull life and hellish boss, her anger finds the perfect outlet. She gets to scream out her agony in a fast-paced song format that doesn’t seem to fit her outward appearance. Metal breaks down some barriers here and becomes the music of the working schlub that’s close to being dead on the inside.

#4 – The power behind the throne

Well, well, well. In a show about a young woman getting abused at work, we get to see some women in power. Gori and Washimi are, respectively, the women who hold a ton of respect in the company as the marketing director and the administrative assistant to the CEO. Everyone knows who these women are: they command rank, they are fierce as hell in their appearances, and they work hard to befriend and mentor Retsuko. That’s women helping women, and the theme is subtle yet undeniable: women, when underestimated, can become the puppetmaster without you even realizing it. 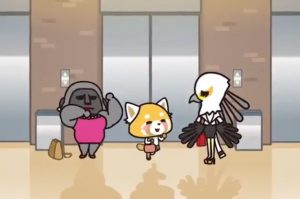 I love the fact that this show comes from a Sanrio character. As part of kawaii culture, the aesthetics focus on the cuter things in life, which makes it all the more hilarious that the show’s themes and execution are anything but adorable. From relationships to unfulfilling career opportunities to crappy friends to learning how to love yourself, there’s some heavy stuff going on in here. It’s tempered by the raging music, and it’s goddamn adorable when it’s wrapped up and presented by the same people that brought us Hello Kitty.

Aggretsuko is available for streaming on Netflix.