Warning: count(): Parameter must be an array or an object that implements Countable in /homepages/45/d96662078/htdocs/clickandbuilds/TheBackseatDriverReviews/wp-includes/post-template.php on line 316
↓
Home→Adaptation→Weekend Movies: Five Reasons to Watch Tale of Tales

Fairy tales have always been my jam. People tend to point to the Brothers Grimm and Hans Christian Andersen, but if that’s all you know, then I want you to check out some of the even older stuff, like Giambattista Basile’s Pentamerone. These are not the same fairy tales of your childhood, noble reader. They’re darker and richer by all accounts, and well worth your time. Also worth your time is Tale of Tales, a 2015 offering from Matteo Garrone (Gomorrah). I’m planning on covering it next week (HINT HINT). Here are five reasons aside from that to watch it this weekend. 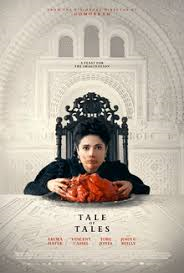 I alluded to this earlier, but Basile is a treasure worth investigating if you’re looking to dig deeper than the adorable tales you were told as a child. The Brothers Grimm get so much attention for being the linguists that compiled the fairy tales we know and love. Basile was what inspired them – he died almost 150 years before they were born. In fact, while the tales the Grimms compiled were at times, well, grim, Basile’s stories were far raunchier and more brutal in both their execution and morals, and while deeply uncomfortable at times in his treatment of race, he captured the language and social attitudes of the time, making it an interesting time capsule. This film covers three adaptions of works in Pentamerone: “The Flea,” “The Flayed Old Lady,” and “The Enchanted Doe”. They’re not word-for-word adaptions, but they certainly hit the mark close.

The costumes in this film are TO DIE FOR. Seriously. You can see the love and care that costume designer Massimo Cantini Parrini put into this film. The attention to detail from embroidery to lace cuffs is so staggering. It filled me with considerable amounts of both envy and hope. Truthfully, I’m a size 12, but I’m pretty busty and short to boot, so fashion often leaves me with a sense of dread – finding clothes is a sad venture for me (and I suspect many of you who are female and have the short/busty one-two punch). When I see costumes like this, I wind up smiling and hoping that I too could wear something that beautiful. When a costume designer makes you dream of period clothing and you find yourself longing to wear what you see – even when the world makes it clear that it has no intention of dressing you – they’ve done their job. Whatever I think he was paid, damn it, I hope they paid him double.

At this point, I’d settle for John C. Reilly’s costume.

#3 – The cinematography is luscious

Peter Suschitzky of Dead Ringers and Naked Lunch did the cinematography on this film. That seems fairly random and mismatched, but you have to admit, those films are demented fairy tales in their own right. Suschitzky manages to create a color palette that weaves together the beauty of the natural world and the fantasy of the storybook world. It’s going to seem a bit like you’re dreaming, and that’s okay – let it lull you. It’s deceptively beautiful and just a hair off from reality. The perfect tone for a film based on Basile stories.

People, something about Cave got under my skin in the best possible way. She plays Princess Violet, a young woman who undergoes her own journey in horrifying degrees. If she looks familiar, you might be noticing a familial resemblance – her older sister is Jessie Cave, who played everyone’s favorite clingy girlfriend in Harry Potter and the Half Blood Prince, Lavender Brown (you just said, “Won-Won” and we all know it). She’s captivating to watch though, and the journey we witness… I got Natasha Richardson vibes from her. No joke. She holds her own against Toby Jones. I want to watch her in more stuff. She’s got the chops. I’m calling it right now: keep an eye on her. 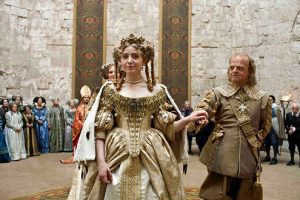 Watch out for this one.

I deeply appreciate that this film functions like an anthology but doesn’t really function like one either, if that makes sense. There’s no narrator – you get to flit between tales, and they occur in real time with one another. That’s a refreshing take on three separate storylines that converge. It’s almost like the film knits itself into a blanket and tucks you in before bedtime. Whether it’s nightmares or sweet dreams afterwards is your call.

Tale of Tales is available for streaming on Netflix.