Warning: count(): Parameter must be an array or an object that implements Countable in /homepages/45/d96662078/htdocs/clickandbuilds/TheBackseatDriverReviews/wp-includes/post-template.php on line 316
↓
Home→Horror→Weekend Movies: Five Reasons to Watch The Sixth Sense (1999)

Can you believe it’s been almost 20 years since M. Night Shyamalan’s The Sixth Sense (1999) came out? Man, I feel old. I remember seeing this in the theatre, before the advent of the internet spoiler. Those were the days, man. I was able to catch it recently and was reminded of why I fell in love with it. Here are five reasons to watch it this weekend. 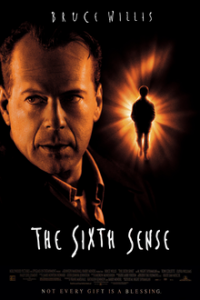 Yes, that’s a horrible joke. That’s a dad-level joke. However, if one thing has been demonstrated with the popularity of shows like The Long Island Medium and Ghost Adventures, it’s that we love to be both scared and think that there are creepy things lurking around the corner in familiar places. Regardless of what you believe, the story of Cole (Haley Joel Osment) working through his issues regarding his psychic abilities with Dr. Malcolm Crowe (Bruce Willis) is one that really makes you think about the burden placed on this poor little boy who just happens to be able to see something the rest of us can’t.

It still blows my mind that Donnie Wahlberg is in this film. The first time I saw it, I remember going, “Who is that guy? I know that guy!” It was one of the New Kids on the Block standing in front of us for a few brief moments, completely unrecognizable. While his screen time is short, it is damn effective. He managed to break my heart within those few minutes. Years later, I still want to hug his Vincent and tell him we can help. 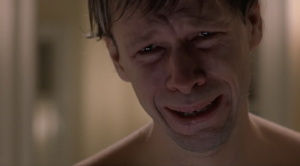 Breaks my heart every time.

Shyamalan was on to something when he cast Osment and Toni Collette as the struggling mother/son duo. Osment was cute as a fucking button as a child, and he was so good in that role – really, his performance was so mature and childlike that it’s easy to see where everyone was rooting for him as an actor (I still do – he’s gone on to comedy and he’s got bang on timing). Collette, for her part, is relatable and ferocious in her role as Cole’s single mother Lynn, who works two jobs and saw her marriage collapse recently; I saw so much of myself in her, from her reassurances to her fears to her passionate loyalty to her child. It’s no surprise that they both nabbed Oscar nominations, and I wouldn’t be surprised if Collette took it home this year for her performance in Hereditary (2018).

James Newton Howard has done some really cool scores. Past efforts include The Dark Knight (2008), The Hunger Games films (2012-2015), Pretty Woman (1990), and The Fugitive (1993) – one of my favorites was Peter Pan (2003). He works frequently with Shyamalan, and I think that speaks volumes concerning the relationship between the score and the mechanics of the film. Personal belief: the two elements must combine to really tell the story to its fullest potential. I find that when a composer and a director combine their efforts, the result is a unified front that assists in suspending disbelief for the audience. For this particular film, that in-step pattern is demonstrated, and we get to see the first in a running pattern. 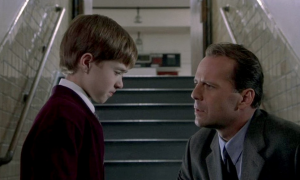 The music only adds to this.

Nearly 20 years later, that twist still works. I showed this film to my children recently. They had not heard of the twist, which has since become the butt of many jokes and ingrained in the larger film consciousness. Watching it hit my 12-year-old brought me right back to that theatre as an 18-year-old kid, amazed that I didn’t see that one coming. As you watch it in subsequent viewings, you look for the clues, but it still manages to be enjoyable and clever. That right there is special.

The Sixth Sense is available for streaming on Netflix.