Warning: count(): Parameter must be an array or an object that implements Countable in /homepages/45/d96662078/htdocs/clickandbuilds/TheBackseatDriverReviews/wp-includes/post-template.php on line 316
↓
Home→Animated→Weekend Movies: Five Reasons to Watch WALL-E

I’ve heard 2008’s WALL-E described as the Pixar film that the weirdos love. Well, give me a sign and make me stand on the corner, for I am one of those weirdos. I love this film for so many reasons. In fact, I love it so much that I think you should revisit Andrew Stanton’s masterpiece. Give Finding Dory a rest this weekend; here are five reasons to watch WALL-E instead. 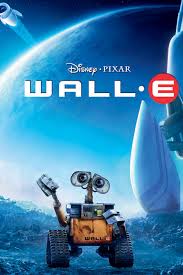 Oh where oh where do I start with this love story? I love that our main characters are robots with limited verbal communication skills that speak in short sentences. I love that WALL-E is, essentially, a kid from the country that gets to move to the big city. I love that he’s so clearly smitten with EVE and she doesn’t fully notice until a ways in. I love how he clasps his own hand to mimic the contact and connection he craves. I love how he sits by her when she’s gone into hibernation mode – good Christ, the look of pure concern and adoration on his face is enough to melt someone. My hope for every reader: that you have someone in your life that looks at you the way that he looks at her. If you don’t, I hope you find that person.

Space is awesome. The universe is a gorgeous place and we’re lucky to live in it. Often, we forget that there’s so much beauty because we forget to look up – there’s too much going on down here. The same is true of the folks on the spaceship Axiom – they’re so buried in their electronics and boring lives that they forget to see the wonder around them. Space is filled with shining lights, endless darkess, and the most beautifully arranged pieces of rock and crystal imaginable. This film is a great reminder that there is boundless beauty to be witnessed if only you’re open to feeling awed by it.

Does the irony of Sigourney Weaver’s casting as the voice of the Axiom make anyone else giggle? This woman built a great career out of being the Tough Female Lead. In Alien, she had to square off against the ship’s computer, MUTHUR, which made damn sure to let her know in no uncertain terms that she was expendable. In WALL-E, Weaver is the ship. She’s come full circle. She’s battled A.I., an alien menace and cloning to wind up at this point. This amuses me to no fucking end.

#4 – Environmentalism, you have a phone call on line one

As I write this, it’s 50 degrees Farenheit outside. In February. In Western New York. This is not normal, and yet it’s becoming more and more normal for the past five years. People, our planet has got some serious problems. We are effectively trashing the place. This film is a scathing indictment of the state of environmental affairs here. If we’re not careful, we’re going to have to board a space ark. And if that happens… we all know it’s a matter of time before our grandkids can’t get out of the levitating scooters.

The future has arrived… and it ain’t pretty.

There’s a great declaration in this film: “I don’t want to survive! I want to live!” Survival and living are two totally separate things. You can coast by on survival, not really caring about the world around you. You can compartmentalize and shrug off so much because you’re still standing. Thus the debate between quality of life versus quantity of life comes into play: would you rather have some good times and have it not last as long, with the looming threat of danger, or would you rather have a lifetime of not a lot happening, making it safely until the age of 90? I don’t know about you, but I’d rather live. Beats the shit out of sitting around.

Hell, don’t even rent this one. Just go out and buy it if you don’t own it already. Watch the little guy, have a good laugh, get all the feels, and then, for the love of all you hold dear, go out and do something.