Warning: count(): Parameter must be an array or an object that implements Countable in /homepages/45/d96662078/htdocs/clickandbuilds/TheBackseatDriverReviews/wp-includes/post-template.php on line 316
↓
Home→Children→Weekend Movies: Five Reasons to Watch XXY

The experience of the intersex individual is one that I will never get to have. That’s why there are films like Lucia Puenzo’s XXY, a 2007 French-Argentinian-Spanish film. The title is a reference to Klinefelter syndrome, in which an individual is born with an additional X chromosome, which causes breast growth, infertility, and smaller testicles (it’s usually not discovered until later in life, it’s that subtle). The main character of XXY, Alex (Ines Efron), does not have Klinefelter syndrome, but the experience of the character is one we can’t ignore. Here are five reasons to watch the film. 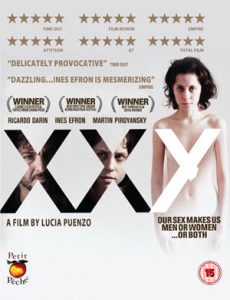 #1 – A look at being intersex as a child

There’s a world of difference between transgender and intersex. The old term, “hermaphrodite,” is one that has been discontinued because of its connotations, including exclusion of certain conditions. The subject of being born with different sets of genitalia and/or traits is one that is heady for most adults, let alone a child. Here, we watch Alex struggle with an identity: born intersex, Alex has been raised as a girl. We come in as Alex undergoes a crisis of identity, wondering if surgery should be pursued (which mom wants) and the continuation of hormonal medications to suppress male traits. Watching a kid come of age is difficult enough – trying to figure it out with something we take for granted – a gender identity – is an entirely different ballgame. It’s sensitive and allows us to watch.

#2 – The impact on the parents

While the heavy emphasis of this film is on Alex, her parents – Nestor (Ricardo Darin) and Suli (Valeria Bertuccelli) – are in conflict on how to react. Her mother wants Alex to be a girl and to undergo surgery while still young. Alex’s father just wants to let his child figure out who they are, and go with that. Both have a protective streak and want their child’s life to be less difficult. It’s a tough balance, yet Puenzo’s film deals with the multiple perspectives in a way that makes no one a villain for having feelings. It broaches the subject that being intersex doesn’t just impact the intersex person – it challenges the notions of parenthood some hold dear, such as reconciling the child you wanted versus the person in front of you. 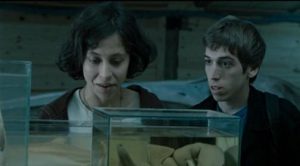 Not your usual first crush.

Oh I love this. Alex meets the son of a family friend, Alvaro (Martin Piroyansky), who develops a romantic interest. Something that tends to hang over the intersex community is the fear of rejection based upon being intersex. This issue doesn’t have an easy resolution in the film – it touches upon the fetishization of intersex individuals, the fears of being accepted for themselves versus in spite of their condition, and the regular teen angst mixed in with the very real fear that someone is going to go screaming and running because they’re not evolved enough to understand how being intersex works. I love the idea that there’s someone out there for everyone, and it’s not always cookie cutter. These relationships deserve screentime too.

#4 – The issues of the non-binary community

And then there’s this theme. I won’t lie, this one isn’t easy. There are parents that want to force a gender identity. There’s the feeling of not fitting in anywhere. There’s the risk of assault, the dehumanization, the social stigma, the need to just feel like you belong somewhere. This is the part that most people have trouble connecting to – the whole host of problems faced on daily basis. Luckily, this film handles these issues with sensitivity and compassion, along with a heaping dose of honesty. Check it out and let it move you. 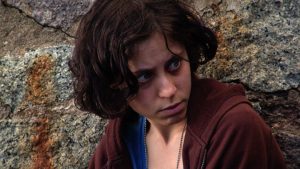 Alex does not have an easy hand.

I won’t give this away, but I loved the sentiment behind the ending of the film. I think it’s well-done and does justice to Alex.

XXY is available for streaming on Netflix.