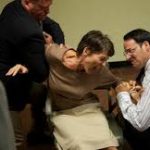 Here in the States, it’s a holiday. So, I’m taking the day off. (The case of shingles doesn’t help either. Need sleep.)

We’ll be back on Monday with The Atticus Institute, a look at Clint Mansell’s contribution to Moon, and a recommendation for a snappy drag movie. Have fun! 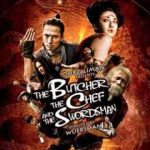 Every so often, I stumble across something so strange that I can’t help but ask other people if they’ve seen it. The Butcher, the Chef and the Swordsman falls into that category. It’s weird – not bad, just… weird. I can’t keep this one to myself. I think you should watch this. It’s like The Ring –  I need to inflict it on someone else. Five reasons to watch it this weekend:
#1 – It has a bizarre sense of humor
When I have to ask the person next to me if I’m drunk – and they remind me that I haven’t had a drop to drink all night (and go so far as to remind you that it’s not possible as you don’t drink) – you know that you’re watching something beyond wacky. Really, wacky is the most accurate term for this film’s sense of humor. Between the music (including a rap number), camera cuts, strange conversations/pantomimes, diagrams, video game fights, and slapstick comedy, it’s hysterical in how delightfully strange it is. It does seem like a bit much at first, but if you relax and steer into the skid, you’ll have a good time.
#2 – Masanobu Ando
I have a soft spot for this actor. He can turn on terrifying when the role calls for it, and he can also switch to wounded just as easily. His performance as a mute character relies heavily on facial expressions and attempts at body language to convey his points. It works. He’s easily the best performance of the film. Considering some of the other things he’s been in – Battle Royale, Big Bang Love: Juevenile A – it’s nice to see him in something that is more light-hearted by comparison that allows for him to be something other than completely psychotic. Considering that he’s the only Japanese actor in an all-Chinese production, that’s pretty amazing as well.
#3 – Three intertwined stories for the price of one
Fair warning: this film is a little ADHD in the beginning. Okay, it’s a lot ADHD at the beginning. We start
with a mish-mash of stories all thrown together, which then morphs into a frame story of Chopper the butcher, who wants to win the heart of prostitute Madame Mei. In order to do this, he has to defeat the swordsman Big Beard. To accomplish this, he pursues the cleaver used by the Mute. It does move in a logical progression after a while, and you get to see how all stories are interrelated. There’s backstory within backstory. Like Inception, with good food (minus the insane wife).
#4 – There’s a nice message in there about the use of blades
There’s weaponry and fighting in this film – however, that’s not the only purpose the cutlery serves. There’s a nice point that’s made about the origins of the cleaver, and what its purpose should be in the world. It’s sweet and optimistic, which, given current events, might serve as a nice escape.
#5 – The exploration of love is pretty good too
Films often function under the assumption that the only kind of love out there worth filming is romantic love, and that’s simply not true. In this film, we get many different versions of it: unrequited romantic love, enduring romantic devotion, love of your vocation, brotherly protection, mentor/student bond, the desire to see one’s friends happy. It’s nice to see that the different facets of the love experience get equal representation as well.
There you have it. Good luck – it’s a strange one, but worth the ride. 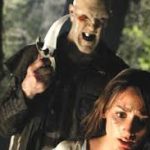 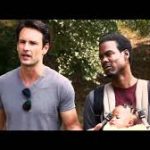 Trial run for the next few weeks: I’m going to do a short film recommendation on Saturdays. Nothing too wordy — mostly just to share some good stuff I’ve encountered. If I like it, or if you like it, I’ll stick with it. The first one launches tomorrow at some point. Hope you enjoy! 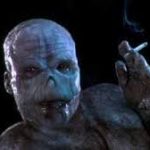 Lo is a different gem altogether: it’s not the prettiest, or the most ground breaking, but damn is it fun to watch due to its refreshing form. It tells the story of a man named Justin (Ward Roberts) that summons the demon Lo (Jeremiah Birkett) to retrieve his kidnapped girlfriend, April (Sarah Lassez), from Hell. As Justin matches wits with the demon in a bid to find his beloved, we’re treated to other demons and a steadfast refusal to give up in the face of damning evidence that April wasn’t what she seemed. It’s delightfully different. Here are five reasons to give Lo a shot this weekend.
#1 – The movie knows how to do silence
The first few solid minutes of this film are completely silent. No music, no speaking – nothing. Director Travis Betz managed to create mood rather than boredom. Well-played, sir. Not an easy task to accomplish. Worth a view for the neat trick.
#2 – The setting technique is pretty cool
There really isn’t a ton in the way of sets. We’re used to seeing films with lots of locations that are made to look like real life. It helps us get lost in the action. Lo does not pretend that it’s going anywhere: Justin is in a circle conjuring a demon in darkness, and Betz keeps it that way. The flashbacks are accomplished through a charming use of obvious, painted stage sets, complete with comedy and tragedy masks. I have to admit, this one made me smile because it didn’t knock itself over trying to do the best flashbacks ever. It settled for imperfect, and it had a great impact.
#3 – The demons are brutally honest and funny as hell
Lo is pretty fucking funny. A consummate smart ass, Lo admits to lying as part of its demon nature, and pulls out all the stops to remind Justin at every turn that, were it not for the protective circle, he would be on the menu. Lo doesn’t pull punches and isn’t afraid to make a joke, which makes the truths it tells equal parts scathing and bearable. Jeez, another demon, is more so fascinated with Justin, but equally brutal in its honesty during their conversations. The back up band doesn’t hurt either. Yes, you read that correctly.
#4 – Cheesy special effects
You know what makes me smile? Imagination that clearly does not have the budget to match its ambition. For what it’s worth, the makeup of the demons is good. Some of the effects, like Jeez’s eyeballs, aren’t as well-executed. And that’s okay. Sometimes, I need to be reminded that it’s not a contest to see who can do the most realistic decapitation. For a low-budget indie film, I’m willing to give a pass if it’s got other redeeming qualities. This one gets that pass from me.
# 5 – The parting look
This one look made the entire movie for me. You will know when you see it. If you can get my heart to break with one look, that’s worth at least a slow clap. That, my friends, is a sign that something went fantastically right. Anyone that’s been on the giving or receiving end of that look will get it. It’s been a sticking point for me.
This one is a rental, as I haven’t quite nailed down where to stream it. However, the clever folks (far more clever than yours truly) will think of something… Enjoy…. 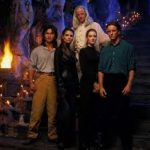 #13 – Goro’s punch
No one thought to punch anyone in the balls earlier? Forget your training: if some hulking dude with four arms comes at me like he’s going to rip my arms off, you bet your ass I’m going to think like that and go for the cheap shot. This is the fate of planet Earth we’re talking about here. I have to be honest: at this point, I just wanted the movie to be done. I did watch it, but it’s a bit hazy from here on out. Except…
#14 – The ending
Is it just me, or did Emperor Khan showing up remind you of Vigo in Ghostbusters II once he was trying to bust out of the painting? I think the Ghostbusters could have done a better job than our tournament entries. At least the laughs would have been intentional.
Now that I’ve got that out of my system, I’m going to go play Tekken.