Warning: count(): Parameter must be an array or an object that implements Countable in /homepages/45/d96662078/htdocs/clickandbuilds/TheBackseatDriverReviews/wp-includes/post-template.php on line 316
↓
Home→Foreign→Fear of the Unknown: My Problem With The Wailing

Just about every person I know that’s watched Na Hong-jin’s supernatural horror flick The Wailing has loved it. I went in thinking that this was going to be a slam-dunk – after all, I dig all sorts of horror from Southeast Asia, so why not? This had the stamp of approval from pretty much everyone I respected in horror circles. This was a modern classic, they assured me. I was going to love it. I would be scared.

I hated it. I was bored. And I really, really did not like what it had to say in the long run. 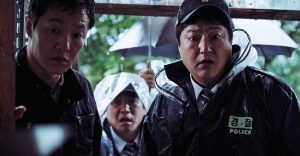 I know, I know – you’re probably staring at your computer screen like I just told you that your newborn is ugly. The kid very well may be adorable to you… but to me, well, its eyes are crossed and it smells funny. And this kid does not like me anymore than I like it.

One of the largest problems of The Wailing is actually a one-two punch: it’s long, and its characters don’t leave very much for us to latch onto so that we can root for them. Let’s start with the length. Clocking in at 156 minutes, this film is over two and a half hours long. Now some films can fly by in this amount of time. The Wailing, not so much. This one goes for the slow-cooker approach: throw in some vegetables, put in raw beef, and let ‘er simmer while you’re at work; next thing you know, there’s a delicious meal waiting for you at home, and it doesn’t feel like you did very much. Some films feel like that payoff: you know that the work’s gone into it, but the time whips on buy and you have something delicious at the end. The problem here is that this film has trouble advancing – I’ve known a few people that have called it slow, saying that an hour in, they’ve felt as though they’ve been watching it forever. That’s not a good sign for someone who admittedly gets antsy. Now that’s not to say that I can’t sit through something long – I can and I have before, and that’s due to tight writing that gets me invested in characters. If I want to see how it ends for someone, I will stick with it. This film didn’t give me that much to go on, though. Jong-goo (Kwak Do-won), our protagonist, is an inept police officer, crappy husband, and meh father. He’s not some lovable guy or even relatable – if I was that incompetent at work, my ass would be fired in no time flat. The daughter that gets possessed, Hyo-jin (Kim Hwan-hee), goes for the Cute Kid angle, but falls just short of it. It feels like we’ve followed her father around far more than we have her, so our bond with her isn’t as strong. Ditto her mother and grandmother, who as known simply as The Wife and The Mother-in-Law – we don’t even get names, which makes it harder for us to care about them. True, we get a possession tale, but there’s not a lot there to really pull out that deep sense of losing the person you love to have it replaced with something terrifying. The sense of budding terror we get is one that focuses on the act of possession rather than the human dynamic. It cheapens the story by removing the element of caring, which is half of the power of possession tales. We watch as the personality changes. We watch as the physical appearance becomes drawn and alarming. We watch as the humanity is stripped away, and we hope that it comes back. We hope the damage is not too severe to be overcome, because possession is really about losing the self to something that is sublimely evil. 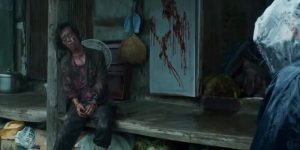 Not enough was done with this.

That leads me into the most disturbing piece of the film: the message. Throughout the film, everyone talks about the mysterious Japanese stranger (Jun Kunimura), a drifter without a name. He’s widely regarded with social scorn and apprehension. The rationale behind the distrust: he’s Japanese. That’s it. He doesn’t have roots, and he constantly moves around, which feeds the distrust of the villagers. As a result, the murders and strange goings-on make him the prime scapegoat: he’s branded a demon and is later chased, beaten and pursued to the point where he’s hit by a car. Here’s the kicker though: the villagers are absolutely right. The Japanese stranger is actually a demon. After false realizations that he was actually a Buddhist priest seeking to trap and destroy the demon terrorizing the village, it turns out that he’s been the one summoning the evil after all. You know what this means? Everyone was right to distrust him. The implication of this is disgusting: it means that every ounce of xenophobia is justified. Every moment of chasing someone around, blaming him for all their ills, and driving a human being into a hunted state that would lead to (under most circumstances) murder is completely justified. According to this film, it’s okay to ostracize and kill someone you don’t like based solely on ethnicity and circumstantial evidence. I’m just going to come right out and say it: in a world where more and more suffering refugees are told that they are not wanted and subjected to racism, religious side-eying, and shoddy treatment, THIS is the fucking ending of your film? You couldn’t have made the dude that turns out to be a demon wind up being someone other than the one person who isn’t Korean? Nope. Inexcusable. 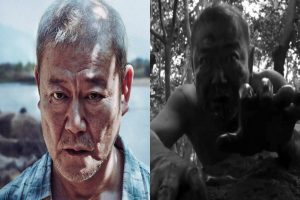 I’m calling it: cop out.

This film made an outsider the source of evil; that’s understandable, because it’s the way that so many horror films work. However, the fact that it relied upon the contentious nature of Japanese-Korean relations made the final message that much worse: the strange is going to invade you and destroy what gives you your identity. It will cause painful death to all around them. It’s right to distrust that which you irrationally fear and discriminate against. It gives you a reason to be a crappy person, and pain is inevitable. Thanks a lot.