Warning: count(): Parameter must be an array or an object that implements Countable in /homepages/45/d96662078/htdocs/clickandbuilds/TheBackseatDriverReviews/wp-includes/post-template.php on line 316
↓
Home→Adaptation→Hail to the King Vol 10 – Pet Sematary

In lieu of the usual King quote, I present you with this:

This is one of King’s much more defined horror stories, as its subject matter is not only violent at times but extremely dark in tone. It’s his first real contemplation of death as not only a plot device but something that surrounds this book on all sides in its story, location, and characters. It’s very Lovecraftian in tone as it gives an impending sense of dread that nothing good is on the horizon: similar to Reanimator in that a doctor is trying to conquer death, keeps getting it wrong with disastrous results but keeps trying it. Louis doesn’t learn any lesson in this story; he just keeps repeating the same mistakes. I think this element is what turned critics against the book upon release because Louis Creed descends in to darkness and doesn’t come out the other side. It has the Lovecraftian style of having a character go insane and that be their arc.

We have a lot of classical King tropes here as well, in the psychic kid who’s seeing the deceased Victor Pascow, the father who’s barely keeping together after coming up against a supernatural force, and the wise old man who knows a lot more than he lets on. But this story has a much stronger sense of time than a lot King stories. You feel the characters and relationships grow over the few months the story takes place during. Similar to IT, you feel time pass and the impending dread closing in on all the characters. 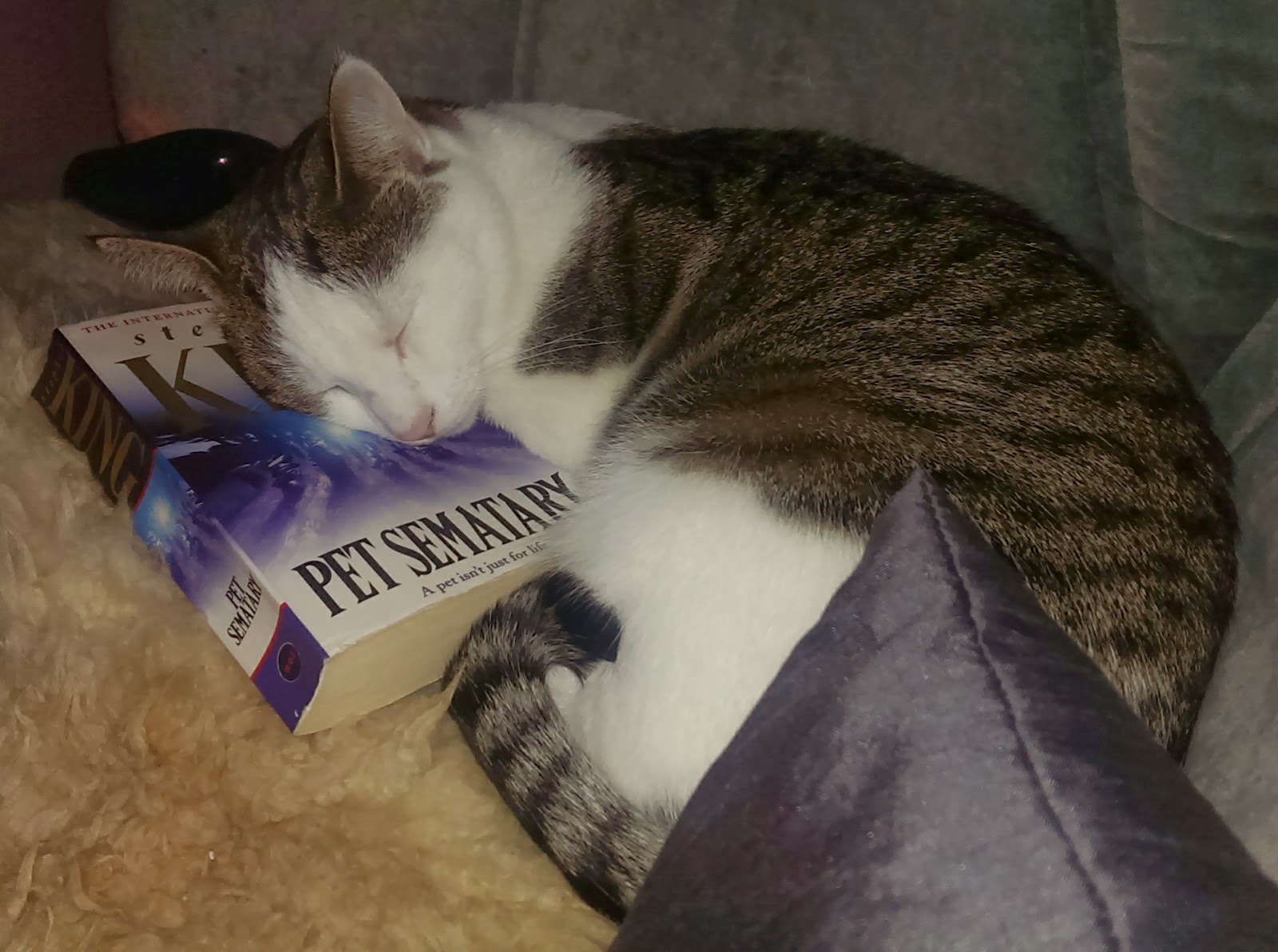 The book tries to cover up its more tragic moments, making them more impactful. Rather than coming out right and having the death of Gage as a scene, we jump to the funeral (because you can’t spell Funeral without Real Fun) while at the same time giving us flashes of the death scene. It puts us on the level of Louis, as you’re experiencing the feeling with him on the day and…. you’re still thinking that Funeral=Real Fun bit was insensitive aren’t you? I stand by the joke because this book doesn’t give you a moment of levity, so someone has to.

King’s idea of the reanimated corpse is very well presented in that they aren’t a mindless shambling hoard, but a dark spirit. They have a Greek chorus quality in knowing how to get under people’s skin. This speaks to them being brought back to life so much as having some other force inhabit their form and wreck house. This is an element the film didn’t touch on that gives the story an edge. The film shows the reanimated as mindless husks rather the cautionary tale they’re meant to be. I know King adapted his own work, so he must have had his reasons for doing so. But it’s an element that makes the book a lot more interesting because there’s clearly something much larger at play we’re not let in on.

IT – Georgie Denborough and Gage are buried in the same cemetery. Mount Hope.

Zelda is the enduring image for me from this film. She’s not related to the main plot but fuck did the sight of her bother me as a kid. I first saw this by accident, back in the good old days of VHS recording. I recorded something else off of the television one night and because as a kid I was obsessed with the Long Play feature of VHS tapes, the tape was left recording long after the intended program ended and this horror gem was accidentally commited to that tape. There was something about first seeing Zelda on a grainy VHS tape that made her even more terrifying. I think a lot of that was the seemingly random way she was inserted into the movie, as I had no knowledge of the story beforehand. I understand the character was played by a male actor, but Zelda remains the most impactful thing in this movie and one of the few things from childhood that still gives me a twinge each time I think of it. (The other thing is an episode of Hey Arnold that really shit me up.) (Editor’s note: I need to hear this story now.) Mary Lambert made one of the best Stephen King movies in that it is both very true to the source material but also expands on some of the more creepy imagery that the book can’t really convey. Why the fuck is she not helming horror movies today? Looking her IMDB page, it’s a long string of music videos (including a load of very famous Madonna videos) and a few other movies, including Pet Sematary 2. But her work her is truly fantastic and the imagery of Zelda alone makes this film incredibly memorable and still bothers me to this day. King adapted his own work on this one, but Lambert’s direction makes it creepy, entertaining and building tension excellently. It’s so damn watchable.

Fred Gwynne is a powerhouse in this film. That very thick Maine accent is something that had lived beyond this film and become a part of pop culture all on its own. Gwynne is a chameleon of an actor who shows up everywhere from The Munsters to My Cousin Vinny, but Judd is the role I like him best in as he plays it perfectly. His drawl and slower way of speaking only amplify the horrifying things he knows about the Pet Sematary and the events that have gone on in Ludlow over the years because of it. He has this wise old man thing going on while being someone you could easily see talking to in any pub/bar anywhere in the world. Gwynne brings something that makes this film complete and as it was one of his final performances, it shows he was always in a league all of his own.

Final side note, legend goes that Bruce Campbell was meant to play Louis Creed originally… how fucked up would that have been? I like Bruce as an actor but it would’ve changed the tone of the film considerably. Think the problem is that Bruce has too much character for Louis, as Creed is a guy who spends a lot fo the film emotionally numb. Campbell plays big roles excellently….. side note within a side note, he’s still playing Ash on TV. Ash vs. The Evil Dead is crazy good, and if you aren’t watching it, make the time.

The book and film are nearly perfect mirror images of each other; the film just cuts down some of the longer family time in the book and shows a real economy of story telling. It makes Pascow a much bigger role, falling into the Griffin Dunne role from An American Werewolf in London: at times guiding the characters in a much more literal way. The presentation of Zelda still really troubles me to this day, which comes across much more in the book than the film because the character was aged up for the film. Which makes her so much more terrifying.

Overall, I really enjoyed both tales but the film takes it for me because I have fond memories of it being a scary movie from when I was a kid. It still has it’s hooks in me to this day.

Next Time: I haven’t the foggiest.