Warning: count(): Parameter must be an array or an object that implements Countable in /homepages/45/d96662078/htdocs/clickandbuilds/TheBackseatDriverReviews/wp-includes/post-template.php on line 316
↓
Home→Adaptation→Hail to the King Vol 20 – Dolores Claiborne 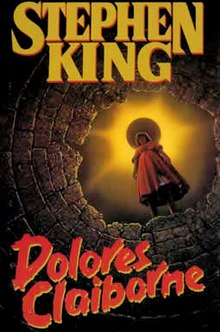 First thing to mention is the format of the book. Rather than King’s usual chapters and third person narrative, we are presented with one long monologue straight to us. The audience is put in the seat of the detectives being told the tale of Dolores Claiborne’s life. It feels like King is challenging himself as a writer to tell a stripped-down story of a woman’s struggle against working class life in Maine and an abusive partner. This also kicks off King’s trilogy of women overcoming abusive partners (Gerald’s Game and Rose Madder making up the other two). It’s interesting that this was King moving away from the supernatural and towards the much more real evil in the hearts of men.

The way that the narrative jumps around, starting in the middle of the story really works for what (on the surface) is very straight forward story. Had it been told in order, there’s nothing to it. But the way in which King conceals details in this very disjointed way of telling the story not only really works from an audience perspective, but also from the perspective of Dolores. Her character is someone who enjoys messing with the police after the way they treated her around the time of her husband’s death (despite the fact she was guilty of his murder).

The events of this story compared to other King works are small. It’s a tragedy about a working-class Maine family. It has shades of class struggle, alcoholism, domestic violence and sexual abuse. These are all common things found throughout King’s work, but here you can see how King has matured as an author. He uses these themes to a much more dramatic level and with a lot of impact – more so than in previous works. It is a true character study of a woman who has been battle-hardened by life, and King brings her to life with such force that her struggles seem as Herculean as anything from his supernatural novels. He gets to the horror of everyday life killer dogs or immortal spider monsters.

As I’ve stated a few times here, I listen to the audiobook versions of all of these stories. This one worked particularly well as it’s almost like you’re listening to a police interview, but only hearing the voice of Dolores. Her little asides to the police are particularly well done as the actor gives such a naturalistic performance you believe she is the character rather than a narrator.

Gerald’s Game: When Dolores kills Joe during the eclipse, she sees a flash of a young girl. This is Jesse at a very traumatic point in her life. 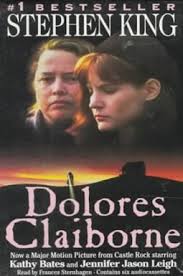 Right from the off the film has a difficult job, as it needs to subjectively show events that aren’t mentioned in the book or show things that would be revealed in the book earlier/later. For the most part, the scenes invented work for the film, as it’s a dramatic narrative shift from a monologue to a narrative film. We get scenes Dolores wasn’t present for and doesn’t have described to her. In some ways it becomes equally Selena’s film in that it’s a woman returning home to her mother and tragic upbringing. Through this it gets to one of the keys to the novel of the mother/daughter relationship and the strength of their bond. The film gives us the closure on their relationship that is only hinted at in the book. 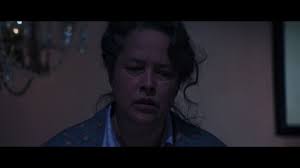 The way that it jumps around in time it seems less concerned with a single narrative and more about creating a feeling for the character of Dolores: it’s the most visually interesting way that this story could be told on film. The landscapes are beautifully painted in reds to portray the past, and a cold blue in showing the very distant present. This may be a way of showing how the past is seen as almost rose-tinted, even in moments of extreme violence and misery.

Let’s all have a moment of silence for the Maine accent John C. Riley was attempting.

Kathy Bates returns to the King material and delivers another stellar performance. King has said that he wrote the character with her in mind after meeting her during the filming of Misery. Bates gives you the chronological progress of Dolores of someone broken down by life, and you see every stage through Bates’s performance. The only critical point I will make is that the non-linear format of the film makes you think that Dolores in the film is someone lost in her own head. Scenes jump between past and present. This is more a point against the filmmaker than it is Bates. who really shows you how hardened life has made Dolores. There are no shades of Annie Wilkes here; this is a much more dense and layered female protagonist.

The film totally omits Dolores’s two sons, Robert and Joe jr. I felt they were a key part in the book because when you see one of the sons trying to be like Joe, that is Dolores’s first inkling that Joe is poisoning the whole family.

As I’ve mentioned above, a lot of the film was invented for a framing mechanism for the story of the book. In the book, we get very little of the present day, and it’s all to do with Dolores two main relationships: Joe and Vera. While the present day story in the film give Dolores so much needed personal redemption by mending her relationship with her daughter, it takes away some of the brutality that really makes you feel for her in the book. All the key points of Joe’s abuse are there to see in the adaptation, but in the book she can describe an argument in the kitchen for an hour and it’s riveting because you get all her little asides about Joe. The film does include some of her great wit, but the book is packed with so many little Dolores-isms that she’s almost her own patois.

Overall,  the film captures a lot of what makes the book so good. The performance by the actor on the audiobook really put this one over the top for me. It makes you feel like Dolores herself is talking to you directly.

Next time: We play a game.