Warning: count(): Parameter must be an array or an object that implements Countable in /homepages/45/d96662078/htdocs/clickandbuilds/TheBackseatDriverReviews/wp-includes/post-template.php on line 316
↓
Home→Children→Jesus Loves You: Little Red Riding Hood, Sexual Assault and Religion in “Easter”

Recently, Dawn Keetley of Horror Homeroom (which is excellent, academic and engaging) directed me to a piece from guest essayist Neil Gravino, titled “Nicholas McCarthy’s Easter: A Modern Fairy Tale.” Gravino’s work is more than good – he makes connections between the famous folk tale and the modern dominance of religion, suggesting that the socially adaptive retellings will keep coming as more time elapses. I agree wholeheartedly with this analysis: I think that the “Easter” segment of 2016’s Holidays is indeed a retelling of Little Red Riding Hood. However, I see it as a little bit darker in terms of the imagery and implications director McCarthy gives us in the installment.

Before we get going on the film, let’s take a look at the interpretations of the folk tale. Some place this tale as dating back to the 1600s, which means it’s been around the block a few times and therefore is open to different interpretations. It’s also got conflicting origins, with some saying that it originated in Italy, while others proclaim it’s German. The most famous retellings have come from one of two sources: the beloved Charles Perrault, and the Brothers Grimm. The Grimms, interestingly enough, were linguists interested in studying the patterns of speech and writing; with this often came the mores and customs of each region they visited, making their collection as much of a social anthropological study as it was of the linguistic pattern each region adopted. Now here’s where it gets fun: there are some conflicting reports on what the folk tale itself is saying. Some argue that it’s a statement on the sexual awakening that comes with puberty. Others – including Susan Brownmiller, who famously deconstructed the tale in the 1970s – see the tale as a cautionary piece wherein woman are told of the inevitability of their rape. The message is pretty clear in this respect: stay on the straight and narrow path, don’t get distracted, don’t trust a strange man you don’t know even if he’s sexy as hell, and don’t place yourself into a situation where you will be “devoured” (i.e., raped). You don’t have to agree with the message; you just have to be open to the interpretation. 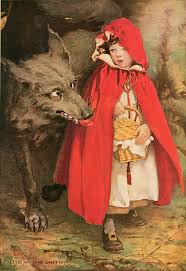 So here’s where we start getting into the rape metaphor in McCarthy’s “Easter.” This is quite possibly the most rapey interpretation of a holiday figure I have ever seen, and with good reason: McCarthy gives us plenty of ammo. Our heroine, who is only known to the audience as The Girl (Ava Acres), begins the segment during a childhood bedtime ritual: it’s the night before Easter, and she’s begun to question the Easter Bunny. The Girl is confused: she’s excited for candy, but scared that Easter means that a man is going to come back from the dead (for the record, I was secretly hoping for some zombie Jesus action from a horror anthology, but no, I have to wait for another day). There’s an air of forbidden knowledge around the night: her mother informs her that no child has ever seen the Easter Bunny, that Jesus’s return from death was a miracle, and that if she’s quiet and doesn’t get out of bed, everything will be the same. She implying that The Girl’s state of childhood can be maintained – her innocence can be perserved – if she doesn’t question anything and literally closes her eyes. However, much like the distraction in the woods that the Wolf provides to Little Red Riding Hood, The Girl gets out of bed when she hears him rumbling around with the chirping chicks, stepping in some clear, sticky slime that isn’t that hard to imagine as semen (either that, or I’m just a gutter mind). The scared child tries to run back to her room, but she’s stopped before she can get to the door by the Easter Bunny (Mark Steger), a crucified man with the face of a rabbit. “This is a dream. This isn’t real,” she tells herself, obviously in mortal terror. How does he react? He commands her to touch him, then grabs her hand and forces the girl to insert a finger into his side wound. He’s sighing and obviously enjoying the act in boarderline orgasmic fashion, while she’s grimacing, attempting to turn away, and groaning in discomfort. This is clearly a non-consentual act, despite that it’s cleverly swapped around in terms of who is penetrating whom. McCarthy isn’t content to stop there, though. “I won’t tell anyone that I saw you. I promise,” The Girl tells him after what’s basically an assault, echoing the pleading and actions used to control a victim post-attack. She’s offering her silence in order to spare her life, something rape and child molestation victims are all too familiar with doing. The Easter Bunny has other plans for her, informing her, “You have no choice,” effectively stripping the girl of any agency in events that will directly impact her. She is powerless. Her consent did not matter then, and it does not matter in the future; her action of getting out of bed somehow merits what will happen to her, displacing the blame from the violator onto the vicitm. He informs her that she’ll never see her mommy again (a possible allusion to the abandonment of childhood), then forces an egg into her mouth to begin her physical transformation into the new Easter Bunny. This kid has no choice: it’s her turn to have a foreign object inserted into her person. She’s no longer a kid anymore. Despite that she wasn’t devoured like Little Red Riding Hood, she has encountered a wolf that’s robbed her of her childhood. 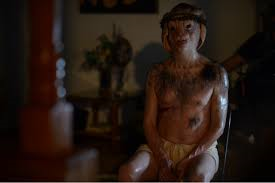 All I wanted was Cadbury creme eggs, I swear!

As if they Rapey Easter Bunny That Could wasn’t enough, McCarthy had to go and place a fresh spin on this tale: religion, which winds up indicting the institution rather than exalting it. Early on in the segment, The Girl makes a point to try to distinguish between the joyful holiday that brings candy and merriment versus the brutal capital punishment and resurrection of a man people believed to be the messiah. That’s a serious crux for a lot of kids, as they go from celebrating the happy, innocent piece of childhood and begin to realize the deeper meanings and traditions. It has the potential to cause psyche-altering thought process. For her part, The Girl’s mother attempts to explain one as a food-based event that only happens once a year versus the commemoration of the anniversary of a miracle. Like most children doubting their faith, though, the child doesn’t see the miracle aspect – she sees it as a man coming back from the dead, which is unnatural and scary to her. This is only the first step toward processing the true horror of the crucifixion of Christ, as the act, when viewed from any lens, is brutal and bloody; she’s spared this, as she doesn’t quite start to question the gory aspect of the event just yet. Her mother, though, mitigates this by telling her to stay in bed. The message there is simple: don’t question it, and maintain the status quo. Go to sleep, and you’ll wake up the same person, just as you did the year before and the year before that. Mom, for her part, goes back to her room and prays, then opens her legs, curls her toes and starts lightly rubbing her thighs, therefore sexualizing the act of prayer. It’s willful ignorance for one and masturbation for the other, with no room for questioning in between. That’s pretty damning, but not as damning as what happens afterwards: once The Girl sets her eyes upon the impossible thing – once validation of her religion is provided, and she has been effectively violated by the so-called miracle for his pleasure – she is told that she has to assume the mantle of Easter Bunny, and that she has no choice in the matter. Her mother was not around to protect her, and her religion ultimately violated her and then damned her to a life she did not want. It doesn’t matter how many “magical things” this kid is going to get to see – this is a scared little girl that wants nothing more to remain a child, but gets forced into unwanted sexual activity and is essentially kidnapped into a life of slavery at the hands of a religious figure. Her religion doesn’t provide hope or reassurance; her curiosity leads her down a path that strips her of her way of life in all aspects. It’s crushing, and the theme is chilling: religion is something that will violate you from a young age, shatter your trust, then steal you away from everything you love. 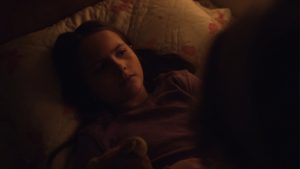 The worst part? Nothing saves her. Nothing. No one comes charging after her. There’s no rescue, no huntsman to rip open the wolf and tell her that everything will be alright. This unfolds as a parallel to the Red Riding Hood story, except there is no happy ending. She’s not the cautious survivor that serves as a warning to others as Little Red does. This child questions her faith and as a result, gives in to curiosity and explores the world around her; in return, she is violated and taken from everything she loves. The moral then shifts from the interpretations of sexual awakening and rape to a far darker one regarding conformity: do as you’re told. Stay in bed with your eyes closed, and everything will be the same for you. Don’t question it, lest you gain knowledge – physical or otherwise – which you were not prepared to receive.