Warning: count(): Parameter must be an array or an object that implements Countable in /homepages/45/d96662078/htdocs/clickandbuilds/TheBackseatDriverReviews/wp-includes/post-template.php on line 316
↓
Home→Family→The Joy of Un-Living: Immortal Ennui in Interview with the Vampire (1994)

No film screamed early 1990s quite like Interview with the Vampire (1994). The film – directed by Neil Jordan from an Anne Rice script – drew plenty of sensation, as writer Rice objected (and later gushed over) the casting of Tom Cruise as her beloved sexy vampire Lestat. It featured the then-young Brad Pitt as our faithful interviewee, Louis, and a tiny Kirsten Dunst as lean, mean killing machine Claudia. The trio of characters – in essence, a nuclear family – presents the many facets to the philosophies of what to take out of life. In fact, their demeanors and actions point toward the cling toward existence in deep unhappiness. 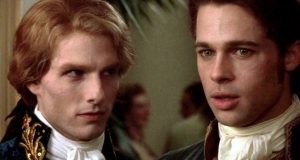 Superficially, the three could not be more different. Lestat views people as food and entertainment, lamenting how he was “never given a choice” to become a vampire. However, Lestat also possesses a thrill in killing, going after the upper class as a type of trophy – effectively patting himself on the back for killing individuals of more significant social status in an act that begs for someone to catch him. Louis, by contrast, is near suicidal when he first meets Lestat, as he has lost his wife and child. Louis views human life as precious, and expresses a repeated wish to die, feeling himself to be an abomination that can’t quite bring himself to take a human life. Claudia, meanwhile, behaves like a child in her earliest years because, well, she was a small child turned before maturity. She makes mistakes but embraces her father-figures, allowing herself to be doted upon as their princess. Rule-driven, she prefers companionship and parental roles in her relationships, particularly when she demands Louis change Madeleine (Domiziana Giordiano) into her new vampire mother. 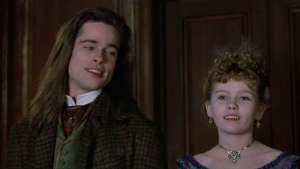 Anything for my princess.

The three, however, reflect deep regrets and unhappiness. Lestat wants a protégé who kills like him: by Louis’s accounts, he would kill around two to three people a night, with a goal of a high-profile kill. He betrays himself, though, when he tells Louis, “Evil-doers taste better,” suggesting a smug judgment upon the economically well-off – which means that he loathes the social class to which he blends in. Louis, for his part, speaks incessantly of being damned and miserable, searching for meaning in a world where he can’t enjoy simple pleasures like food and sunrises. Claudia is dealt the harsh hand of never being able to age, with the pent-up frustration of a lifetime of no sexual contact and only ever being seen – quite literally – as a little girl. Between the three of them, they’re deeply unhappy individuals who always search for meaning and someone to accompany them. 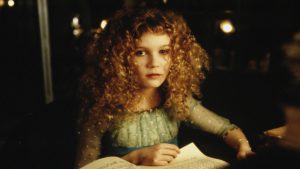 An eternity of algebra.

Therein lies the meaning of undead living for the trio: each seeks a sense of belonging while attempting to mask their unhappiness and cling to life. Lestat turns Louis to have a companion: he picks a vulnerable target to turn, someone who wouldn’t fight to remain a human. Louis, for his part, is self-loathing and still retains a will to die. When he exhibits signs of leaving Lestat, Lestat does what many desperate, dysfunctional partners in a dying relationship do: he introduces a child into the mix to make his partner stay. Claudia brings them happiness for a bit, playing to the sense of paternity within Louis. As time wears on, Claudia seeks someone who will protect her without the overtones of attraction, thereby bringing Madeline into the fold to retain that sense of eternal love and caring of which she was robbed as a child. All three share a common trait: despite being absolutely miserable, they continue on. No one exposes themselves to the sun. No one tries to find creative ways to die – everyone wants to live. Lestat subsists on rats after Claudia tries to kill him; Louis refuses to give up when he’s buried alive; Claudia screams and clings to Madeleine when they’re exposed to the sun. Even though they feel unhappiness and loneliness, each wants to keep living. Each wants someone to accompany them throughout the years. Death would be easy to achieve, yet they go through the motions and carrying on in their undead existence. 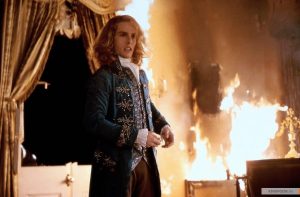 Or just burn that shit down and start all over. Seems rational.

What does this say about the nature of existence? All signs appear to point to a persistent need for living despite extreme unhappiness and self-loathing. It’s also not enough that one must keep going – one must bring someone else along for the ride, to share in the experience. It’s an achingly human quality – even if the characters are undead.