Warning: count(): Parameter must be an array or an object that implements Countable in /homepages/45/d96662078/htdocs/clickandbuilds/TheBackseatDriverReviews/wp-includes/post-template.php on line 316
↓
Home→Aw Hell No→The Prize: Louise’s Less-Than-Stellar Beau in Teen Witch

The 1989 teenage fantasy film Teen Witch is a combination of guilty pleasure and childhood staple: the damn thing played on HBO all the time growing up, much like Clue, Real Genius, The Worst Witch and Mannequin. The story was every bit as schmaltzy and saccharine as you’d think: shy, awkward, brainy Louise Miller (Robin Lively) finds out that she’s a witch, and gains supernatural powers and a kicky Zelda Rubinstein on her 16th birthday. She uses her newfound powers to gain popularity and flip the tables on her cretin teenage brother, but does she dare pursue the teenage dreamboat Brad (Dan Gauthier)? Therein lies the rub. While Brad is awfully pretty, well, he’s a bit of a douche. 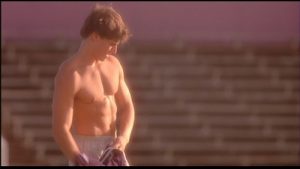 When we first meet him, Brad lives a pretty charmed life. He’s the captain of the football team. He has amazingly feathered hair. He wears a varsity jacket with the same ease that I display when lying on my couch with a Doctor Who blanket (zero fucks, people – zero fucks). We’re supposed to look at Brad and think, “That, babies, is a teenage dream boat.” He looks like he’s old enough to score beer, he’s popular, and he doesn’t seem to be a completely heartless person: he looks at Louise with pity when the world is getting her down, like the time he accidentally ran her off the road while she was on her bicycle. He asks for help with studying, showing that he cares about his grades. We never see him give anyone a swirlie, despite that he sits by as other people laugh at someone’s public misfortune (hey, he laughed during the reading of Louise’s private piece about wanting to kiss Brad). Guys, Brad isn’t just a pretty face – he’s deep, man. 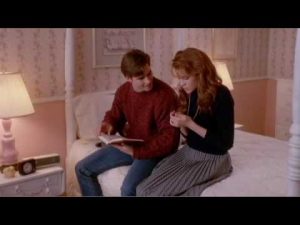 Except for one thing: Brad is dating his longtime girlfriend Randa (Lisa Fuller, the same woman who played the nameless, revenge-porned sister in Monster Squad). As the 1980s audience, we’re supposed to look at Randa and hate her guts because she’s every bitchy stereotype known to man. She’s got an obnoxious nickname. She’s beautiful, but she’s mean. She has no heart and her friends hate her (as evidenced by the locker room spat when everyone criticizes each other’s hair and talent). She’s an over-the-top trope. Nonetheless, Brad is still dating her, and he continues to do this throughout the duration of the movie. Go back and rewatch the movie: there is no dramatic breakup scene – he simply ditches her at the prom to dance with Louise. It’s not like Brad has an innocent flirtation with Louise either: there are full-blown dates and makeout sessions. There’s a Sassy magazine-worthy, abandoned house montage wherein Louise and Brad chase each other throughout the set and pause to have perfect lighting and face sucking for the audience as we coo and root for them. And you know what happens afterwards? Brad enters the next scene with his bitchy girlfriend right by his side. He hasn’t ditched her for Louise. It takes until the end of the movie for him to decide that Louise is the better deal. 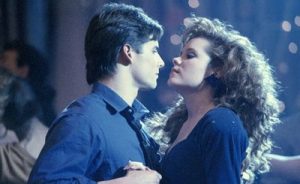 This message is pure crap. The message the film wants us to take is that Louise “won” Brad fair and square by foregoing magic when she had the chance to manipulate him to get what she wanted. She had to demonstrate growth, like realizing that being popular meant nothing if she treated her faithful friend Polly (Amanda Ingber) like shit. We’re supposed to be on her side because she learned that magic isn’t everything – that she needed to be a kind-hearted person to get the good life she craved, or else she didn’t earn it. The problem with this line of thought is that it’s painfully 80s in its superficiality. Louise gets popular overnight through magical means, but she stays there because she looks good in her trendy outfits and crimped hair. She’s suddenly on the cheerleading squad and people like hanging around with her. She went from brainy nerd to popular girl by twirling around in a bedazzled jean jacket she got from a one-hit wonder backstage at a concert she snuck into. And best of all, Louise lives the dream because the hot guy noticed her, and she didn’t have to manipulate his heart with magic. Madame Serena’s initial prediction for Louise suggests that she and Brad are going to get married and have two beautiful children. Louise gets the happy ending, everyone is a better person, and we’re all going to smile because there’s an 80s, synth-driven ballad playing in the background as everyone watches the It Couple dance. It’s fun and we get to wistfully hope that someone gorgeous and popular is going to swoop in and love us for who we are once we do our hair and slap on a dress. Except for the fact that if you have half a brain, you realize that this dude totally had a non-consenting overlap with his girlfriend and his side piece. Like it or not, Louise is the side chick for the bulk of the romance in this film. Brad cheated on Randa and Louise knew full well about that. She makes a play for someone who is in a monogamous relationship and unavailable. And really, is that the kind of person with whom you want to spend the rest of your life? Someone who thinks it’s okay to not say or do the right thing because he’s pretty and other pretty people are watching? Someone who keeps option B on the back burner while option A affords him social status? Someone whose actions are justified as being acceptable because the person on the other end is a bitch that everyone wants to see fail? 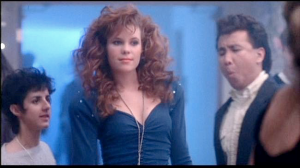 Undoubtedly, I’ve upset someone’s childhood talking about this. But we need to stop pretending that dearest, darling Brad is somehow a prize. He’s not even a box of Rice-a-Roni that you win on The Price is Right. Brad’s a dick. He’s a pretty dick, but a guy like that is going to take what he wants and go with the convenient flow. That’s not exactly a good deal. Quite the opposite: she should run fast and far, and find someone with a shred of integrity.