Warning: count(): Parameter must be an array or an object that implements Countable in /homepages/45/d96662078/htdocs/clickandbuilds/TheBackseatDriverReviews/wp-includes/post-template.php on line 316
↓
Home→Action→The Rising Tide: Revisiting Kill Bill

Let’s get one thing straight from the get-go: the title of this piece does not reference the rising strength of women. The title of the piece is a firm reference to the wave of vomit I had to choke back after re-watching Kill Bill: Volume 1 and Kill Bill: Volume 2 in the wake of the Weinstein/Tarantino scandals. Months ago, Uma Thurman made reference to telling her story when she was ready when all of the nasty details of that odious pus bag started spilling out; true to form, it took until earlier this year for her to talk in a composed manner about it. Much like The Bride, you could feel the fury coming out of her as she gave both the original statement and then the interview to Vanity Fair. And with it, one can’t help but see some disgusting themes and behaviors in a new light, with entirely fresh conflicts for the audience.

Some background, for those who don’t want to click the link: after saying “no thanks” to Jabba the Weinstein, Thurman was involved in an incident wherein director Quentin Tarantino demanded that she perform a stunt: driving a car way too fast on a dangerous patch of road. The resulting accident has left residual pain for Thurman, who, after concluding her work on both volumes (shot together at once and later split up), never worked with Weinstein or Tarantino again. Viewing footage of the crash is horrifying when you realize that a director placed his actor in peril when he easily could have used her trained stunt double. While we’re going by inference here, it seems a bit too coincidental that a woman who turned down the producer was put in harm’s way. Some people questioned why she’d even get behind that wheel, to which women of the world rolled their eyes and said, “Oh, honey, I’ve had that exact boss.” When someone starts pressuring you and your livelihood depends upon going with the flow, you learn how to shut up and go with it. Instantly, we felt for Uma, and we felt for the countless women who have been manipulated into doing something they find uncomfortable at work in the name of taking care of themselves and their families. 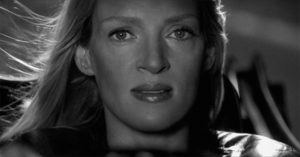 So when we revisit Kill Bill: Volume 1 in particular, our first reading is suddenly challenged. The first few viewings, we see a badass assassin rise from a coma to avenge a brutal attack she endured while pregnant, killing in the name of her lost four years and the unborn daughter she assumes is dead. The Bride has made a list, she’s checked it twice, and she’s taking no prisoners. It’s feminist, it’s badass, it references great samurai movies, everybody’s happy! With the new information, though, it’s pretty chilling. Whereas we overlooked the wake-up incident wherein The Bride assaults skeevy hospital orderly Buck and an anonymous John, it’s now a further reflection of violation of a vulnerable woman: The Bride gets pimped out to be raped while unconscious, with stern warnings not to hit her or otherwise leave marks on her body. But, you know, small potatoes, because on the first viewing, while we feel bad and are happy that her violators are punished, the real focus is Bill and the sword fights. The first few times you see this film, you’re disgusted by the incident, but it doesn’t fully register that this poor woman has been raped repeatedly for years while unconscious. While it’s great that she killed two of these men… how many other Johns are out there? How often has this happened, and why can’t she fully process that?

This broke my heart.

Which leads me to my next point: the speech of Vernita Green (Vivica A. Fox), aka Copperhead. During the kitchen scene, Vernita tries to appeal to The Bride’s maternal side, asking her not to kill her with her child closeby; after all, Vernita insists, she’s changed. She realizes that she’s done something bad, but she’s a wife and a mother, and therefore doesn’t deserve to die because she had a baby. This scene made my blood boil because it’s everything wrong with avoiding punishment on a past crime. Yes, Vernita had a child and apologized for her actions; however, she beat the living shit out of a pregnant woman because her boss told her to do so. Like it or not, that’s a pretty nasty crime, and no amount of coffee or pictures of her daughter will ever take away what she did to The Bride. And you know what? This is the same bullshit logic of someone who’s been caught after years of getting away with doing crappy things. You can dress it up by proclaiming that you’re a good person now and that you’ve got kids and you’ve changed, but it does not change the fact that you harmed and abused another human being. Turning your life around comes off as another excuse for why you shouldn’t be punished. And that’s a running theme for the #MeToo era, with people claiming “it was [fill in the year]” or “I have taken a long look at myself and changed”. Your current life and desire to avoid jail time doesn’t void your poor acitons. As my grandfather used to tell me, the piper always gets paid, so be damn careful how you act. 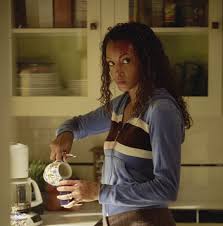 Cream and sugar to go with your fucked up logic?

Then we get to the second film, and there’s a chunk of it that’s utterly vomit inducing when applied to this lens. After slugging her way through Bill’s crew, The Bride (now openly referred to by her name, Beatrix Kiddo) makes her way to Bill’s compound, where she finds her happy, healthy daughter B.B. living with Bill (David Carradine). During a discussion in which Bill drugs her, the dynamics of their relationship come out: Beatrix found herself pregnant on a mission, and made the snap decision to sacrifice a life and career that fulfilled her to give her unborn child a better life, telling Bill that she could bear any unhappiness that life would have brought her because she “would have had B.B.,” and that she left because she knew that one day, he’d “claim” the child. Bill, for his part, acknowledges – but never apologizes for – the assembly of the hit squad in what he refers to as an “overreaction”. Sweet lord, this is domestic abuse wrapped up in a bow and placed under the tree on Christmas Eve. Beatrix fled with her kid to avoid a life of death for hire, and Bill responded by laying the smackdown on his ex-lover in a fit of jealousy. He mowed down a bunch of people and shot a pregnant woman in the head because she ghosted him. He refuses to apologize for his actions, choosing instead to drug her into revealing her rationale – he wants to get inside of her head, whether she consents to it or not. Bill, you’re a controlling son of a bitch: you shot your ex-girlfriend in the head for choosing a life without you, you took her baby, you drugged her because you refused to take her at her word, and you lack the ability to utter the simple words, “I’m sorry.” No wonder she flew the coop with your kid.

The tough part now is moving forward, and asking yourself what you see now. The funny thing about film is that your interpretation changes as you age and gain more experience: something could be riotously funny one year and appalling the next. The Kill Bill movies are no different. It’s okay to see a badass movie, because that element is there. But it’s also okay to see reflections of hypocrisy by the filmmakers, who injured their lead in the name of Hollywood politics, and later tried to control the narrative. You may not want to see it, but don’t worry: it will present itself to you when you’re ready.