Warning: count(): Parameter must be an array or an object that implements Countable in /homepages/45/d96662078/htdocs/clickandbuilds/TheBackseatDriverReviews/wp-includes/post-template.php on line 316
↓
Home→Animated→Weekend Movies: Five Reasons to Watch 9

I’ll admit that this film is going to be hit or miss with audiences; frankly, I think it was ahead of its time and didn’t find the audience it deserved. 9 is an animated film from 2009, directed by Shane Acker. It focuses on a group of rag dolls with different personalities that have to work together to stop evil machines from destroying the world, which has become a desolate wasteland. It’s intriguing. Here are five reasons to watch it this weekend. 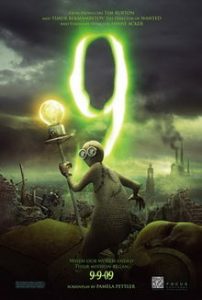 #1 – The production team behind it

This film had some major talent behind it: Tim Burton, Timur Bekmambetov, and Jim Lemley. Everybody knows Burton (if you don’t, I may have to ask if you spent time in the bunker with Kimmy Schmidt), but if you’re an action fan, you’ll know Bekmambetov: he’s done Night Watch, Day Watch, Wanted and Abraham Lincoln: Vampire Hunter. As for Lemley, he produced Wanted, Red Eye, and The Diving Bell and the Butterfly. You can see shades of action and emotion in this film – their other works are evident in this respect.

I have to admit, I’m impressed. This film managed to snag Elijah Wood, Jennifer Connelly, John C. Reilly, Christopher Plummer, Crispin Glover, Fred Tatasciore, and Martin Landau. Each one plays a rag doll with its own personality, whether it’s Connelly as a warrior or Landau as the brilliant scientist. The cast fits well with each personality, and the recognition of the voice makes the concept of watching animated rag dolls a bit less off-putting. Plus, some of them aren’t known for their voice over work, which lends an artsy quality to the production. In particular, my eyebrows raised on  Martin Landau because his isn’t exactly a name you’d associate with cartoons. 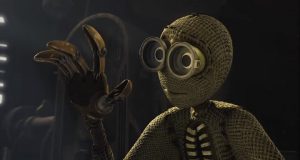 #3 – It started out life as a student project

Back in 2005, director Shane Acker worked on this film as a student in the UCLA Animation Workshop. From there, it got produced into a feature length film, and has since won a slew of awards. This is proof that your hard work as a student can lead to both recognition and opportunity. You can accomplish more than just drinking and student loans in college. In a world where it seems like making it is a long shot, this isn’t half a bad message. That’s got to count for something.

#4 – A different view of the apocalypse

Lately, everyone seems to think that we’re going to meet our end through either disease or nuclear war, which isn’t entirely ruled out as options. I’m still side eying you, CDC. 9 gives us another possibility in the grand tradition of The Terminator: the rise of machines and the loss of humanity in an industrial revolution from Hell. The idea of a lack of soul driving the end of humanity as we know it is pretty haunting, especially as the late Stephen Hawking used to warn us left, right and sideways of the dangers of A.I. Sweet dreams, kids. 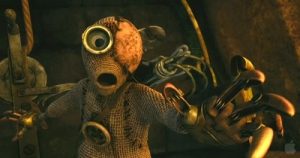 Honestly, it’s not all bad.

#5 – Themes of teamwork and redemption

Yes, I know – it’s a tired theme that people have to work together despite differing personalities to save the day. But at the end of the day… we still haven’t learned this lesson. And we need to, because the world ain’t gettin’ any more cuddly. So watch this and think about how you approach others. It’s worth the observation and thought.

9 is available for streaming on Netflix.