Warning: count(): Parameter must be an array or an object that implements Countable in /homepages/45/d96662078/htdocs/clickandbuilds/TheBackseatDriverReviews/wp-includes/post-template.php on line 316
↓
Home→Drama→Weekend Movies: Five Reasons to Watch Marie Antoinette

Sofia Coppola did not exactly have a great 2017. The Beguiled had some issues, to say the least. One of my favorite pieces of 2017 press, coincidentally, came from that promotional lag: longtime collaborator Kirsten Dunst basically told her boss to go fuck herself when it came to losing weight. Which inspired me to go back and rewatch their 2006 collaboration, Marie Antoinette. It’s not a bad flick. Here are five reasons to watch it this weekend. 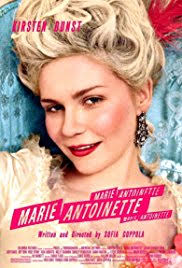 Some people really disliked the juxtaposition of New Wave music on a period piece, and this aspect of the film got a lot of press. What most don’t realize without having seen it is the fact that Coppola blended New Wave music with a classical score. The combination works to bring about one of the greater themes: it makes the dated era more parallel to our modern times. While the 80s music highlights the decadence of the era, I think it’s more than appropriate concerning our current a nostalgia for the 80s. Especially considering the growing economic divide.

#2 – Sympathy for the devil

Total honesty: I went through a period when Dunst was not my favorite actor. However, in recent years, she has grown considerably on me to the point where I actively enjoy and seek out her work. In this film, she makes the reviled monarch into something we haven’t seen as much of before: an actual human being. There’s something heartbreaking in watching her smile and hug someone who regards her with pure frost. She portrays Marie Antoinette as someone functioning the best she can in a stifling environment with a lot of complicated rules and few coping outlets. Seems simple, but this perspective helps to make her a far more sympathetic character than the one we’re traditionally taught. She was rich, yes, and completely out of touch, but she was also someone who tried in a cold environment with a shit sandwich of a mother.

You will want to hug her.

Holy shit, just kill me if this ever becomes my life. Yes, there are expensive clothes and a ton of food, but UGH. The sense of aching loneliness and stuffiness… yikes. The pecking order. The barbs and back-stabbing of Molly Shannon and Shirley Henderson (who is the most obnoxious vampire in existence – really, she doesn’t age, and her voice grates on me) are enough to make me scream. The weird ass customs and rituals, written off as “This is Versailles!” No wonder they lived life to the most decadent – everything was so empty.

#4 – It provides some opportunity for research

Did you know that the real-life Marie Antoinette was married off to the Dauphin of France at the age of 14? And that it took seven years for the marriage to be consummated? How about that the paternity of her eldest child was questioned? Or that the French actually really liked her when she first married into the royal family? She’s a pretty interesting figure, and the film is a good springboard to investigate her biography. And not just Wikipedia, peeps. Hit up your local library. See where it takes you. 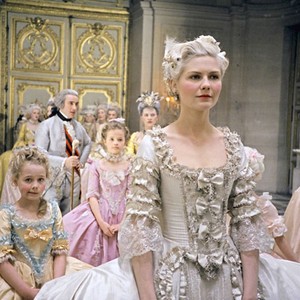 Go out and do the research. It’s surprising.

Personally, I’m not one for being bossed around, especially at this stage of my life. I’ve been in situations and relationships where I’ve had to conform to what’s expected of me to make things run smoothly, and it’s a horrible feeling. So what does that mean for this film? It’s an exercise in powerlessness. This woman is at the mercy of what others around her decide, from her mother to her creepy brother to her in-laws. Plus she has people shouting at her to produce a child, and that’s just the worst feeling on the planet. It’s a stark reminder that even though an upper-class world might look pretty, it may not be all it’s cracked up to be. A golden cage is still a cage.

Bonus reason: I love seeing Dunst and Jason Schwartzman together.

I desperately want to see a show with these two where they’re both private detectives (or florists or cake decorators – I’m not picky) and Dunst is the perpetually drunk loose cannon while Schwartzman is trying to keep their business afloat. This could work, people. Make Larry David their landlord who they try to dodge all the time and we’ve got Emmy gold on our hands.

Marie Antoinette is currently available for streaming on Netflix.