Warning: count(): Parameter must be an array or an object that implements Countable in /homepages/45/d96662078/htdocs/clickandbuilds/TheBackseatDriverReviews/wp-includes/post-template.php on line 316
↓
Home→Drama→Weekend Movies: Five Reasons to Watch My Life Without Me

Yes, this is a heavy week already. We’re just going to deal with it (in between breaks of protests) and forge ahead with something that is, shall we say, a kick in the gut. I’m not even going to sugar coat this one. Directed by Isabel Coixet, produced by Pedro Almodovar’s production company El Deseo, and resting on the incredible performances of Sarah Polley, Mark Ruffalo and Scott Speedman (not to mention Debbie Harry), 2003’s My Life Without Me is something that is at times uncomfortable, but you need to see it. Since it’s an emotional order, I’ll give you five reasons to watch it this weekend. 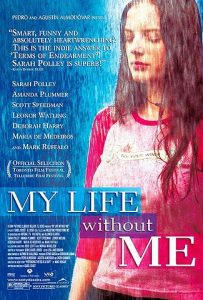 #1 – A look at terminal cancer

Plot summary: a 23-year-old woman named Ann (Polley) collapses and finds out that she has ovarian cancer, which does not have a forgiving survival rate on a good day (really, Google it and cry). It’s spread everywhere, and the doctor gives her two months to live. There’s nothing that can be done, so Ann decides to get unconventional by most tearjerker standards: she decides not to tell anyone. Rather than mar her family’s last two months with her, she chooses to let it be business as usual so that no one has to count down the days. We see her struggle with her impending death, and try to find a spark in her life again. It’s sad but at the same time… it’s beautiful.

Over the course of her final two months, Ann decides she wants to experience a relationship other than the unfulfilling one she’s had with her husband, and meets a man named Lee (Ruffalo). Lee is an extraordinary soul. He desperately loves Ann, and wants to be with her. He’s a sweet man. He doesn’t care about her circumstances. There are so many good, kind things he wants to do for her that I can’t spoil here because watching them unfold in front of you is a gift of which I can’t bring myself to rob you. Lee is just… goddamnit, if this role doesn’t make you fall in love even slightly with Mark Ruffalo, you have no fucking soul. 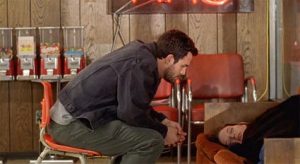 Part of why we love Mark.

#3 – The circumstances of Ann’s life

Oh does this one make me bleed. Ann works hard, but doesn’t get ahead. She had two children as a teenager. She busts her ass to support herself, her beloved girls, and her out-of-work husband. Her mother makes sniping comments about her life and choices, effectively reducing her at every turn. And then she gets cancer, and there’s nothing that can be done. She’s the dependable one who takes care of everyone, and I see a lot of me in that. Let me tell you, as the mother of two daughters, this scenario scares the crap out of me. I love my daughters so much, and I can’t imagine looking at them knowing that it’s finite in the immediate future. Everything else can fluctuate, but it’s the thought of looking into those faces and knowing that I won’t get to see them be adults that scares me more than any horror film.

Between singing a little song to your special loved one, or pausing to stand in the rain, there are so many tiny moments we are too busy to catch. This film is a great reminder that there is something special in pausing to take in the little sensations. Hug someone. Cherish that smile. Fall in love. It’s not limitless, people. Don’t wait until you get bad news to start living. 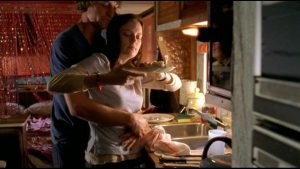 It’s not a bottomless well.

Everyone loves the story of a valiant fighter. Everyone wants there to be a triumph over adversity. Everyone wants to watch the tough woman kick cancer’s ass despite all odds. We love to talk about kicking cancer’s ass. Sadly, this doesn’t always happen. Sometimes, we’re confronted with a crappy hand, and we have to figure out how to move forward. Sometimes, that means embracing the ending and making the most of the time you have. It’s not a bad message – it’s different from what we’re used to seeing. And that’s okay.

It’s a tough one to find. Truth be told, it’s ten dollars on Amazon, to outright buy, not rent. I’d go so far as to say go on ahead and add it. It’s one that will give you pause.