Warning: count(): Parameter must be an array or an object that implements Countable in /homepages/45/d96662078/htdocs/clickandbuilds/TheBackseatDriverReviews/wp-includes/post-template.php on line 316
↓
Home→Action→Weekend Movies: Five Reasons to Watch Oldboy

First off, we are NOT talking the 2013 remake Spike Lee did. Let’s clear that up right away. For the record, yes I sat through the film. And yes, I hated myself for it (sometimes, I suffer so that you don’t have to. You’re welcome.). Nope, I’m talkin’ ‘bout the 2003 film from Park Chan-wook. The one that’s part of the Vengeance trilogy (which if you have caught Sympathy for Mr. Vengeance or Lady Vengeance, you’re seriously missing out). I’m not the biggest crime drama/mystery fan, so it takes quite a bit for me to like one of those types of films. Oldboy is the one that fits the bill. Here are five reasons to watch it this weekend. 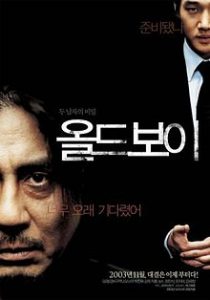 Good lord, I cannot be the only woman that finds this man attractive. All too often, people will heap praise upon Asian actresses for their “exotic good looks,” which comes across as perpetuating racial stereotypes. Asian actors aren’t often high up (or even represented) on those Most Beautful lists, which is a goddamned shame. So, I’m saying it: Choi is hot as hell. Even better, he’s compelling to watch, with an air of effortless cool. He’s like that in every film in which I’ve seen him – Oldboy is where it really shines. Let that flag fly. We’re all friends here.

Picture being stuck in the same room for 15 years. How batshit bonkers would you go? We’re not just talking regular prison here, where you get to interact with other people, no matter how tense or violent it gets. We’re talking isolation for 15 years. No interaction with anyone. No one allows you to kill yourself, despite your best efforts. You are stuck in one room while you watch yourself get framed for a murder you didn’t commit and your child gets pawned off to someone else. This film makes this treatment even worse by refusing to give up a motive for the imprisonment. Half the fun is trying to figure out the mystery, but it’s the slow burn that really cooks you: what could this guy have possibly done that was so bad it merited 15 years of brutal isolation? 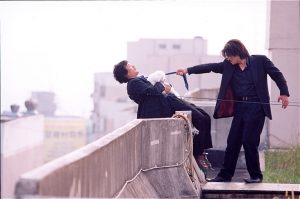 I’ll get you, my pretty. And your little Bichon too!

If you haven’t seen this film, there’s an intense fight scene that takes place as our hero, Dae-Su (Choi), fights his way down a hallway full of henchmen armed only with a hammer. Here’s some fun trivia for you: this scene was filmed over the course of three days. Park did it in a continuous take format, and took 17 cracks at it before he nailed it. There’s only one piece of CGI in the whole thing, and that’s a weapon wound. The rest is all fight choreography. That, my friends, is art.

No, really – hypnotism plays a role in this film. There’s some question as to whether or not the practice actually works. Some people swear up and down that it does; others, not so much. I’ve never tried it, so I can’t really offer an opinion one way or another. Park offers the practice up as plot convention, and it works well here. Some of the transitions are gorgeous, and it makes you doubt reality. Speaking of which… 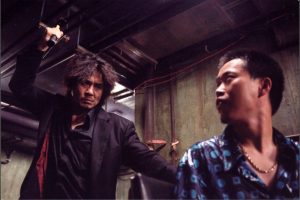 Oh does this one get hotly debated. I have some thoughts on it, but I won’t spoil it for those of you that haven’t seen it. I will say that director Park left it open for interpretation – he has stated in interviews and commentary tracks that the film is left open as a discussion piece. I find that kind of nice, and in the spirit of film analysis and interpretation: it’s in the eye of the beholder, making you just as much a piece of the artistic process. It’s nice to know that there’s no asshole at the end of this waiting to tell you that you’re wrong. Unless if you’re on the internet… then that’s par for the course.

Oldboy is available for streaming on Netflix. The 2003 version. Make sure you get the right one.