Warning: count(): Parameter must be an array or an object that implements Countable in /homepages/45/d96662078/htdocs/clickandbuilds/TheBackseatDriverReviews/wp-includes/post-template.php on line 316
↓
Home→Science Fiction→Weekend Movies: Five Reasons to Watch Sunshine

I have been trying to cover Danny Boyle’s Sunshine for the past six months. No lie. Six months. Every time that I slate it for coverage, something pops up to take precidence. Well, not this week. I’m going to cover this one if it kills me. Before I get sidetracked again, here are five reasons to watch it this weekend.

Can we just cast Murphy in everything? A dream film would include him, Tilda Swinton, and Domhnall Gleeson (oh, that is a post for another day). Anywho, yes, Murphy. The man is like butter. His voice is rich, his manner is graceful, and he can convey a range of emotions. He makes everything better.

This film came out in 2007. If you’re bad at math, that’s nine years at this point. Keep that in mind for a second. It featured a dying planet that desperately needed the sun restarted. That’s a scary thought: that our reliable old planet Earth might not make it to see another Christmas. Oh wait, that’s right… we’re facing that scenario right now. Thanks a lot, global warming. Boyle was talking about the concept of our planet being completely fucked almost ten years ago. Given, it’s a dying star, but it’s not exactly coincidental that our planet faces a major, climate-changing crisis. It’s a wake up call.

I have a soft spot for Rose Byrne.

You know how some people are altruistic and sacrifice themselves to save others in the name of the greater good? Ever wonder how the flip side reacts in those situations? You know the ones I’m talking about – the people that would far rather sit on the sidelines and let some other chump sacrifice himself in the name of continuing the human race. It’s a dark thing to face about yourself: would you die trying, or would you let someone else die so that you could go on? It’s a staring into the abyss moment, and it’s one more of us could stand to face head-on.

In typical Boyle fashion, this film has some shots that are out-of-focus and some that are pure beauty. I won’t spoil them if you haven’t seen this yet. Just know that there are a few moments in this film where you will stop and breathe the word, “Whoa.” 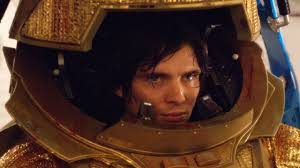 Look at those colors!

#5 – I’m doing something with this next week