Warning: count(): Parameter must be an array or an object that implements Countable in /homepages/45/d96662078/htdocs/clickandbuilds/TheBackseatDriverReviews/wp-includes/post-template.php on line 316
↓
Home→Motherhood→World’s Best Mom: Motherhood in Grace and Frankie

Okay, how great is Grace and Frankie? How can you not love a show that’s well-acted, well-written, and tackles subjects such as sexuality, addiction and aging with complete tact and humor simultaneously? One of the subjects of the show I’ve grown to deeply appreciate is its frank yet heartfelt look at motherhood. In a move of careful contrast, the show manages to balance its views of the maternal experience via the Hanson and Bergstein women. 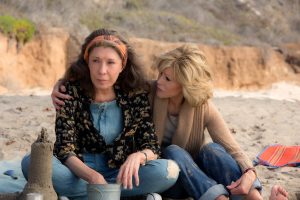 The Hanson women – Grace (Jane Fonda), Mallory (Brooklyn Decker) and Brianna (June Diane Raphael) – seem wonderful on paper, yet they struggle quite a bit with the realities of their roles. Let’s address a fact about Grace that is often joked about: she’s a functioning alcoholic. Ex-husband Robert (Martin Sheen) makes reference at one point that he’s only ever seen Grace without a drink twice, and it wasn’t pretty. Drink that one in (see what I did there?): Grace had to have a drink in order to get through her life including the durations of her pregnancies. She might be a successful businesswoman, but her daughters often criticize the fact that she was a distant mom who always had a drink in her hand. This aspect of her demeanor has carried over into her role as grandmother: she can’t connect to her young grandchildren, and only really notices when the kids obviously show favor to the grandmother that is willing to play with them. For Grace, their affection is a type of game at which she must prove she’s best by virtue of her other successes. Faring better is her daughter Mallory, who, at the start of the series, is a happily married stay-at-home mom. Mallory is hitched to a successful doctor, and she lives in a beautiful house with everything she could want. The problem with Mallory’s life is that it’s empty, and we watch her attempt to save a disconnected marriage first with a pregnancy, then counseling, before it finally implodes. Mallory recognizes her deal with the devil: as a stay-at-home mom, her husband Mitch (Geoff Stults) doesn’t want to pitch in with their children. The reality of the life of a stay-at-home mother is anything but glamorous and luxurious: she’s exhausted and doesn’t know what to do with her kids at times; it’s a non-stop job, and the pay sucks. We can feel her drowning despite that everything looks so pretty. And the one who isn’t having that life at all? Brianna, who proudly announces her disdain for children, her love of work, and her undying devotion to getting drunk and high. The road she travels is one laden with scorn: in emphasizing that motherhood is not for her – which, to be clear, is her god-given right because everyone deserves the chance to make that choice – the people around her roll their eyes and proclaim she’s a heartless ice maiden. The subtlety here is that Brianna isn’t treated as an entire person because she doesn’t want kids. Given, some of her business acumen doesn’t help, but one can’t help but wonder… if Brianna cooed every time she saw a baby, would we view her as harshly? 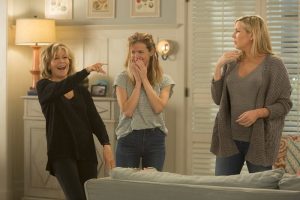 It’s time to enter the Bergstein. As the hippy-dippy mother of boys with a knack for smoking pot and getting into legal trouble, Frankie (Lily Tomlin) doesn’t seem to be the greatest case for motherhood; however, Frankie is a damn lion. Frankie is a wonderful human being who couldn’t have biological children. When Grace throws in her face that she’s never given birth, Frankie is obviously stung, but refuses to let that damper her excitement concerning an impending birth. She loves and supports the progress of her recovering addict son Coyote (Ethan Embry), going so far as to swallow her own feelings of possible abandonment so that he can meet his birth mother; when the woman states that she can’t publicly acknowledge the obviously-heartbroken young man as her child, Frankie delivers a strong verbal beat down that her little boy is not to be treated as the subject of shame. It’s no surprise that she embraces Allison (Lindsey Kraft), the hypochondriac girlfriend of her son Bud (Baron Vaughn), without judgement. The excitement she shows at the impending birth of Allison and Bud’s baby is infectious and raw: she is consumed with joy that someone brand new is joining her family, and she wants to be there for every moment, especially the birth. As she tells her ex-husband Sol (Sam Waterston), if she couldn’t be there for the births of her sons, she wanted to be there for the birth of her grandchild. In typical hippie form, there’s more than enough love to go around, and even though we may not want Frankie to drive us to the local zoo, we certainly want her there to love us when life is being unfair. Frankie simply understands those heady life concepts that some struggle with for years. 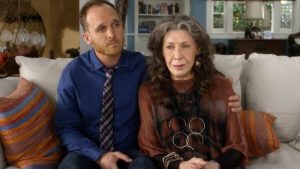 Not every part is easy.

The curious part of this show is that it uses these families and diverse women to demonstrate the complexities of motherhood in terms of social expectations versus emotional weight, in a fashion that does not seek to judge any of its subjects. Grace may have been a poor matron, but she certainly showed her girls how to dig in and work hard – this aspect gives Mallory the ability to start over when she realizes her unhappiness, and Brianna the confidence to say that the life she wants is a life that doesn’t involve endless episodes of Calliou. Those are both points of conflict for women in today’s world: asking if they must trade freedom and happiness for financial comfort, or defying the social edict that motherhood is the only way to achieve happiness. Likewise, Frankie’s arc displays so much pain and acceptance. She’s lived through the pain of not being able to have biological children when she wanted them, and not being present when her kids were born; she’s weathered addiction and distance and some pretty unsexy parts of being a parent that feel like punch after punch. However, she’s still so loving and excited, and we want her to win. And in this respect, through their writing and portraits, we recognize that each and every one of them does in fact win. They get to be people on journeys, no better than anyone else. 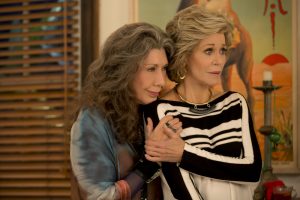 I can’t even muster sarcasm. Thanks, Netflix.

It’s not a competition, which is where this show really soars. People make mistakes, and no one is perfect. We don’t get paradigms, but women who make the choices they feel will make them happy. In some cases, they deal with the hand they’re dealt. What this does for us is provide a beautifully safe spot for us: we can watch them stumble and not get it right, and feel comforted that not only are there parts of us in there, but that a good support system won’t spout how you’re wrong. They’ll do the thing women do best: they’ll give you a hand and help you out of that sand trap while cracking a joke.