Warning: count(): Parameter must be an array or an object that implements Countable in /homepages/45/d96662078/htdocs/clickandbuilds/TheBackseatDriverReviews/wp-includes/post-template.php on line 316
↓
Home→Fairy Tales→A Filthy Shame: Class in Tale of Tales

I absolutely loved Matteo Garrone’s Tale of Tales, an adaptation of several fairy tales from Giambattista Basile’s Pentamerone. The three stories we witness – labeled “The Queen”, “The Flea” and “The Two Old Women” – combine to paint the picture of both the stages of female life and the dangers of obsession. Much like the tales upon which they are based, the film adds another interpretation, one with which we are acutely aware in the current world climate: the disgust with the poorer socioeconomic classes. 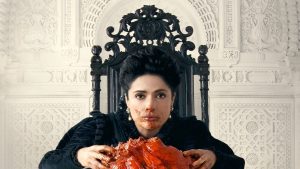 Come and get some.

The tales each provide a sharp contrast of wealth and strict social strata, beginning first with “The Queen”. After the fertility ritual from a necromancer leaves both the Queen of Longtrellis (Salma Hayek) and her virginal servant (Laura Pizzirani) pregnant, the titular Queen attempts to segregate her child from his doppelganger friend. She displays anger and power over Jonah’s nameless mother – the lack of name itself a comment on the woman’s low social status – by threatening the woman with expulsion if her son Jonah (Jonah Lees) continues his friendship with Prince Elias (Christian Lees). The Queen goes so far as to command the scared woman, “Don’t look at me” during her lecture, telling her son afterwards that he cannot be friends with “some servant”. This story also sees the presence of traveling entertainers who exist purely for the entertainment of the royal class in their chambers. The tale culminates in the supernatural bond between the boys being no match for the jealous, all-consuming love of the Queen for her royal-born child. 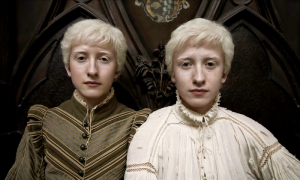 Go back to the corn, boys.

The offering “The Two Old Women” sees elderly dyer sisters Imma (Shirley Henderson) and Dora (Hayley Charmichael) playing a game of deception with an oversexed king (Vincent Cassel) in the hopes of securing affection and advancement. The King, for his part, demands sex with Dora on the grounds of “I am your king,” then throws her out the window when he sees she’s an old woman instead of a nubile dyer wench. When Dora (Stacy Martin) is transformed via breast feeding from a really friendly neighborhood witch, she’s rewarded with youth, beauty, sex and royal marriage. However, Dora refuses to share her resource for youth with Imma, telling her sister instead that someone flayed her and she just happened to grow back brand-new, sexy, youthful skin. This lie causes the naïve Imma to allow herself to be flayed alive in the hopes of becoming young and beautiful like her sister. Dora later loses her newfound spoils, presumably as punishment for the fate of her sister and selfish social climbing. 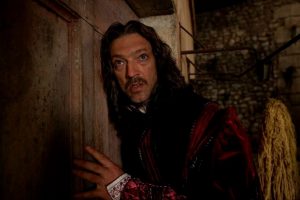 Most noteworthy and troubling, however, is “The Flea”. The King of Highhills (Toby Jones) squanders his time on an overgrown flea, a known parasite and carrier of disease. After the flea’s death, the king has his strange pet skinned, and holds an impossible contest to identify the skin to keep his daughter Violet (Bebe Cave) from marrying. When an Orge (Guillaume Delaunay) correctly guesses the displayed hide as being that of a flea, the King is bound by his word to give his daughter to the Ogre, angrily telling Violet that he outranks her and if he says she has to marry the Ogre, then it’s tough titties for her. Violet – who has been dreaming of a tall, brave, handsome man that’s going to sweep her off her feet – is then dragged to the Ogre’s lair, where she is kept captive in squalor and raped until she ultimately escapes and later kills the Ogre. Violet then drags back his severed head and presents it to her father, telling him, “This is the husband you chose for me.” After she proves her strength in the face of ordeal based upon her father’s folly, Violet is crowned queen. 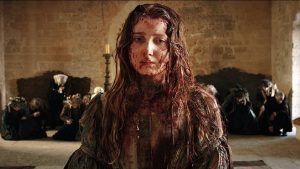 The shit one goes through for a promotion.

The upper class does not come across in a positive light at all in this film. Hayek’s Queen refuses her child to have a friend with which he shares a bond because Jonah is the illegitimate child of a servant while her son is a prince… despite that the two boys are identical and share a supernatural birth. Really, if my kid wants to play with a child who resulted from a virgin birth, be my guest. The Queen’s reasoning comes across as shallow, despite that there are times she can’t tell the two boys apart – her reasoning is based solely on class and her obsession with being the only thing worthy of her son’s love (sidenote: how hellish of a mother-in-law would this woman be?). Conversely, her son leaves his wounded bestie to his distinctly lower-class existence after their struggle, despite that Mommie Dearest is gone. Cassel’s King needs to be neutered, frankly, in the hopes that he stops humping everything. He uses the phrase “I am your king” more times than Draco Malfoy informs people he’s going to phone home to daddy in the Harry Potter series, drawing attention to the fact that he uses his position of power to gain sexual access to women – he’s King Rapeface incarnate. In turn, the woman who pursues him directly in the hopes of social advancement causes immeasurable suffering to a sister that only wanted to escape being considered old, working class and unattractive, and Dora is punished with losing her newfound status for her actions. As for Jones’s King, he hisses to his obviously-upset child, “No one has the right to question my will, least of all my daughter!” Jones’s King chooses to power trip with a weird sense of honor rather than think of the suffering his child will undergo, putting his need to be in charge ahead of her physical safety. Surely, he must realize that the Ogre – a known cannibal who lives on a mountain – is going to isolate and demand sex from Violet, and with that in mind, we realize that this man is okay with his daughter getting raped if it means no one can question his word. That’s a shit sandwich of a dad right there. 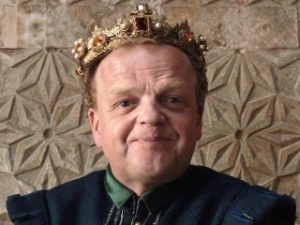 That’s KING Deputy Dip Shit to you, my good sir!

But there’s something else that’s disconcerting about “The Flea” we need to address. When the Ogre takes Violet back to his dwelling, he actually makes attempts at being nice to her. He takes her hand when they start their journey to his mountaintop dwelling; when she can’t walk, he picks her up and carries her. He clears the remains of the dead men he’s got stashed, offering a severed arm to Violet for food. He sleeps protectively with an arm around her. He grows angry when she escapes, but he does not kill her, instead choosing to accept her touch and hug before offering her a ride on his back. The body language of Guillaume Delaunay as the Ogre is enough to make you feel bad for the guy, as he appears touched that she finally trusts him. Dare I say it, the Ogre shows her affection, which places us in the awkward position of finding something positive with a man that claims a bride, rapes her and freaks out about his loss of property. On one hand, he’s a violent rapist that eats people; on the other hand, he demonstrates affection, which is something she desperately craves from a conventionally attractive, wealthy man of parallel social standing. If you go back and listen to Violet’s checklist of a good husband, it reads like a sheltered schoolgirl’s Trapper Keeper musings. It’s enough to make us wonder what would have happened had they communicated and grown to care for one another – would he have been transformed? Certainly, it’s not the first time a woman’s ended up with her rapist in a fairy tale. It’s an uncomfortable place for the audience because we must acknowledge that if he was a handsome prince that had been turned into an ogre, we’d be rooting for him to win Violet’s heart and the entire kingdom with some of the little things he does. But he’s not a prince: he’s the working class guy that isolates a woman he won in a gambling game, that eats people and can’t speak more than a few words at a time. He plays the social game by correctly getting the prize of a pretty upper-class wife, but she rebels against any affection because he doesn’t look the part. Social mobility doesn’t exist in this setting, and we’re left in the position of feeling sorry for someone we probably shouldn’t because he’s got some nasty institutionalized prejudices to overcome (plus, the rape thing is ultra-scummy). The Ogre was never going to win, even if he had been a saint. 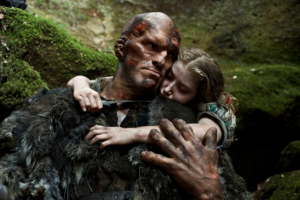 WHY IS THIS SO BLURRY?!

I’ve watched this film three times now, and I marvel at each passing session as to how the sharp class divide is treated. From the virtuous poor to the tone-deaf royalty, we get to witness the gamut of privilege and consequence. However, each individual retains their original social status, reminding us cruelly that in fairy tales, there is no rising to a new station in life: there is only a circular journey that will lead you back to the starting point.