Warning: count(): Parameter must be an array or an object that implements Countable in /homepages/45/d96662078/htdocs/clickandbuilds/TheBackseatDriverReviews/wp-includes/post-template.php on line 316
↓
Home→Thriller→Weekend Movies: Five Reasons to Watch Bad Samaritan

It’s a fun feeling to watch a movie and think to yourself, “I just watched a cult classic being born.” Such was the thought that entered my mind when I watched Bad Samaritan in theatres. Now, by the time this comes out, it’s most likely out of the theatres because it hasn’t been doing very well at the box office. However, for our friends in other countries… you still get this tale of cat and mouse. Here are five reasons to see it, if you can catch it, this weekend. 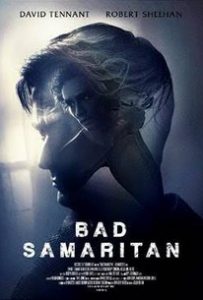 The story centers around Sean (Robert Sheehan), a photographer who moonlights as a thief in order to make ends meet (because, you know, respectable jobs are for chumps). He breaks into the house of Cale (David Tennant), and finds a woman (Kerry Condon) chained up. From there, Sean tries everything to rescue the woman, while Cale does his best – thanks to his unlimited wealth – to destroy Sean’s life. The amount of plot twists gets more than a tad incredulous. I swear, at one point, I wanted Tennant to call Sheehan a meddling kid. It fits so well with all of the twists and turns.

If Devlin’s name sounds familiar, it may be based more so on his producing credits as opposed to his directing credits. Sure, he did that modern marvel Geostorm, but if you’re a kid of the 90s, you saw all of his produced movies without realizing it. That’s right, he’s responsible for Independence Day, Godzilla and Stargate. Notice a theme here? Yes: big on action, light on logic and the laws of time. It’s like Bruckheimer without the skeezy carwash.

Is this what you kids call a murder room?

#3 – It gets funny after a certain point

At one point about 90 minutes in, I started to giggle. There is SO much going on that there is no way humanly possible that these people can cram it all into one day. While Tennant is great as a villain (more on that in a minute), he can’t be in two places at once, and the film asks us to overlook the logic of his bending of the rules of time and space. Which is why I pose a theory: this is a crime film about time lords. It’s a thriller about a killer time lord. It’s hilarious and I want to watch it again and again to precisely pin down the time frames so that we can study it for time travel technology.

David Tennant is a great actor, but damn it, the man never met a piece of scenery he didn’t like to chew. I think that’s a stage thing, and as we all know, Tennant is tremendous on both stage and celluloid. If you’ve ever met a stage actor… they compete for focus. There is no one who will clamor for attention quite like a stage actor (the Kardashians are the only competition in that race, my friends). The end result: he’s an excellent villain who cannot help but pull every last bit of attention onto his person. That’s sort of refreshing, as so many actors pretend that they don’t want you to look at them. Just be honest and have fun, because it shows – it certainly did for Tennant, who is enjoyable as all hell in this film.

I sincerely hope that Tennant messes with the neighborhood kids.

Oh the cops are so inept in this film: we see people following protocol and completely screwing up a bad situation that’s handed to them on a silver platter. The thing is, they do indeed follow protocol, but they lack the critical thinking to go the extra step. By the time everyone realizes how bad things are, the shit has hit the fan so hard that you can trace it directly back to the cops’ incompetence. Now, are all cops this bad at their jobs? No. They’re who we should call when something bad happens. However, there are a lot of bad cops out there too, from not taking victims seriously to doing the bare minimum because there are bigger fish to fry. And we need to take that into account too.

If you can go out and watch this, please do. It’s so batshit it’s great. You won’t be sorry.