Warning: count(): Parameter must be an array or an object that implements Countable in /homepages/45/d96662078/htdocs/clickandbuilds/TheBackseatDriverReviews/wp-includes/post-template.php on line 316
↓
Home→Animated→A Groovy Kind of Love: Russell’s Strength in Up (2009)

I’m of the firm mind that if the first 20 minutes of Up (2009) don’t make you cry, something is wrong with you. You’re a cyborg. You’re not fully human. How can you not cry at something like that?! THE FEELS. *deep breath* Okay, rant over. See, it’s easy to get swept up in the emotion of those first 20 minutes – they pretty much define the whole movie. However, if we’re lost in those 20 minutes, we overlook something extraordinary about the film: it packs one hell of a punch in the form of the character Russell (Jordan Nagai) and his obsession of connecting to an absent dad. 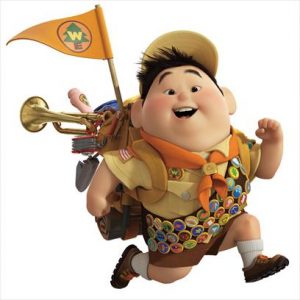 I love this child so much.

When we first meet Russell, he’s the butt of a joke from Carl (Ed Asner). Russell, a Wilderness Explorer, seeks to earn his Assisting the Elderly badge, and knocks on the door of our favorite curmudgeon. The first sight of him is stunning: a little boy, decked out in uniform, with a full backpack, a trumpet, a shovel, a pot, a pan, and a sash dazzlingly filled with badges earned. Russell politely introduces himself per the script, only to have the door slammed in his face. He waits until Carl opens the door again, then begins reading. When Carl slams the door, we see his foot wedged in as he lets out a quiet, “Ow.” That’s our boy: wearing down a grumpy old guy. He’s the Tracy Flick of Boy Scouts. Carl, for his part, tells the boy to catch an imaginary bird, which leads to Russell hiding under his porch and taking off on his adventure with him. 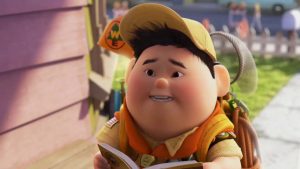 It’s in Paradise Falls that Russell manages to go from comic relief to heartbreaking child we just want to crush with love. Sure, he whines and flashes his winsome smile while a house is tied to him, but Russell really kicks into depth when he’s sitting around a campfire with Carl. In describing how his dad is usually busy (in increasing agitation and nervousness), he references a woman named Phyllis, and Carl quickly moves to correct the boy’s manners; confused, Russell informs him, “Phyllis isn’t my mom.” It suddenly dawns on us why the badge means so much to him, in the child’s own words: his dad “promised he’d come to my Explorers ceremony to pin on my Assisting the Elderly badge.” This isn’t just a compulsive need to overachieve – this little boy wants to have a relationship with an absentee dad. He points to his decorated sash, where we see for the first time that there’s a big ol’ hole right where Russell’s heart is. And oh Jesus Christ, my heart shatters every time I watch that sweet little kid hopefully say, “Maybe he can show me about tents then.” The entire thing lasts under a minute. 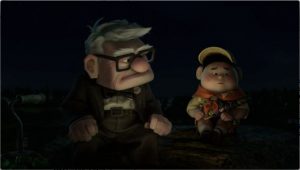 It’s that tiny scene and the accompanying lingering shot on the missing piece of his badge that packs in anything you need to know about Russell’s character – in under a minute. That knowledge forces us to gain perspective without having to browbeat the character into a huge speech about family and belonging, and the result is infinitely more effective than any amount of exposition. All the film needs is an unflinching eye on a child who shifts uncomfortably in his seat while answering some basic questions about why his dad didn’t show him how to set up a tent. The thing is, in our own lives, how often does the great tragedy get mixed in with something simple and mundane? How many times has someone slipped in a personal detail? One minute, you’re remarking about spoiled milk; the next, your conversational partner casually mentions how their grandfather drank spoiled milk while in the throes of dementia, and in that instant, you’re taken aback because some of how they react makes perfect sense. It’s the same with Russell: he wants to earn that badge because his dad made a promise. He feels he bugs his father too much, so he must earn his father’s participation and affection. The motivation makes us love him even more, and we feel such acute disappointment that when Russell finally gets the badge, his dad isn’t there. The little kid, covered in dirt and looking like something the cat dragged in, looks out and sees that his dad isn’t there; everyone else has a dad onstage with them. We all know a dad like that, and if you’ve ever had to stare helplessly before giving someone a hug when their parent doesn’t show, that feeling is overwhelming. 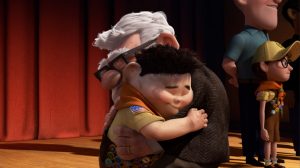 So there’s no one more deserving of the Ellie badge at the end of that film, and that’s how the character redefines his motivation and purpose. The Assisting the Elderly badge is small potatoes – it’s a representation of a kid trying to earn the affection of someone who couldn’t care less about his kid. The Ellie badge is so much more prestigious. It’s Ellie’s good heart. It’s her welcoming Carl into her life when he was scared and intimidated, placed in the exact spot where she put it on Carl years before. It’s the beginning of a family, of belonging, of having an adventure partner – the things that matter more than chasing someone’s unwilling heart. Carl has the house and Russell has the badge – both symbols of what they chase and love, even if it can’t give anything back – but they both manage to let go of what they’re chasing for something even better: true kinship. It’s easy to lose yourself in the first 20 minutes of the film, but if you’ve ever had to search for something to call your own, you feel seen after watching Russell. And you have hope that someone is going to pin their own Ellie badge on you one day.