Warning: count(): Parameter must be an array or an object that implements Countable in /homepages/45/d96662078/htdocs/clickandbuilds/TheBackseatDriverReviews/wp-includes/post-template.php on line 316
↓
Home→Bullshit→A Lack of Clarity: Robin and “Symphony of Illumination” in How I Met Your Mother

First thing’s first: I have a soft spot for How I Met Your Mother, despite that upon rewatch, it’s deeply disturbing. I can laugh at Barney (Neil Patrick Harris) whilst cringing at the near-constant slut-shaming of any woman who isn’t wearing a wedding ring. I’m looking at you, Ted Mosby (Josh Radnor), you judgy bitch – be grateful for the fact that you get laid with that haircut. I can giggle at the antics of Marshall (Jason Segel) despite that Lily (Alyson Hannigan) is every damn stereotype of the passive-aggressive wife many of us attempt to escape. But the worst offender for me is the treatment of Robin (Cobie Smulders) and her decision to not have children. It’s fraught with mocking and patronizing, and when firm decision making fails, it heads for sympathy in the worst way possible. No episode typifies this struggle more than “Symphony of Illumination.” 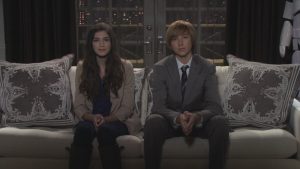 Historically, Robin has never wanted kids. When she was dating Ted, she made it perfectly clear that babies were not a life goal. In “Something Blue,” we find out that their breakup was caused by this massive deal breaker, as Robin wanted to be a reporter that traveled the world without having children. She wanted to have an extraordinary career, and made the choice with which she felt comfortable. In the episode “Little Boys,” she reluctantly bonds with the child of a man she’s dating, and takes into consideration how the interactions she has with him may impact the child if the kid gets attached and the relationship doesn’t work out (pretty mature, in my opinion). As time goes on, we see that she’s uncomfortable around babies, especially in the episode “Glitter,” wherein we find out that her childfree lifestyle has resulted in alienation as her best friends lose themselves to motherhood and she’s rendered friendless (nevermind that this episode reinforces that once you have a child, you stop being you and you’re only a mother in your identity, but that’s another article). All the while, she’s made fun of for the fact that she doesn’t really like the experience of having small children around. She lets babies sniff her the way dogs do, she’s scared to hold them, she nearly barfs at the mention of cervical mucous, and she works long hours in exotic locales. And honestly, that’s not a terrible thing. Look at Robin and ask yourself if you think she’d be happy saddled down with a life she didn’t want. She’d be scared and feel out of her depth with a baby, and it’s okay that she feels that way. A harsh truth is that having a baby is fucking terrifying – you can sugar coat it with whatever you please, but it doesn’t change the scare factor of something like a high fever or a blowout diaper or explaining how terrible the world can be to a kid. Some of us do want that, but some of us take a considered look at that life and politely decline. However, society has trouble letting that idea go. We can hope that someone as nice and successful as Robin would put more people in the world like her, but that’s not what Robin wants. She does not wish to birth and raise children the way that Lily does. And that’s okay. 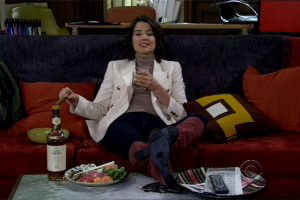 So when we get to “Symphony of Illumination,” we get hit in the face with a bullshit scenario. Robin tells her two children in the future humorous anecdotes about how there was cheering and dancing when she found out she really wasn’t really pregnant with one of them. We see the funny reactions of freak outs in baby shops regarding bodily pregnancy changes and loss of sleep. The kids are clearly still perceived to be a drag, and are offered half-assed apologies. How funny, amirite? Isn’t it great to tell your kids that the mere concept of them terrified you like no other, and the confirmation that they weren’t about to arrive sent you into happy dances and scotch-soaked celebrations? As the episode progresses, we learn that Robin is in fact infertile and will never have a child; she creates the imaginary children as a way of dealing with the loss of her fertility, because now the decision is final. It’s not her choice anymore, and deep down, Robin really wanted to have that possibility of a life she never wanted in her back pocket, just in case. 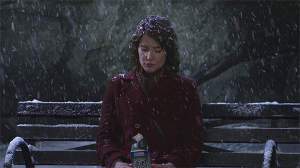 This is apparently the face you’re supposed to make when you’re confident in your decisions.

Now let’s get something straight: loss of fertility is a real thing that can really fuck you up; I know this from experience. I’m not arguing with that presentation in this episode. What really pisses me off is the idea that a woman who has never wanted to have children – biological or adopted – suddenly has all of the naysayers validated. Robin goes from “I don’t want kids” to “I can’t have kids,” which are two TOTALLY different mind frames. One is a choice; the other is a forced hand. While this can and does happen, I found it highly unfair that it was applied as a life lesson to a character that was already ridiculed for her reproductive decisions. This is where I’m going to bat for the childfree by choice: they take a lot of shit for knowing what they want. A lot lot looooooooooooooooooooot of shit. There are nosy colleagues and strangers and parents who constantly toss around the dismissive phrase, “You’ll change your mind!” more often than they care to admit. There are gifts given in hopes that they’ll change their minds, and sometimes, even appointments booked with specialists because clearly that must be the problem (Christ are there some horrifying instances of privacy invasion of which I’ve heard). They’re asked invasive questions and called selfish for answering honestly. They get made to feel like criminals for not wanting to devote their lives to a commitment some don’t think all the way through. They put in the thought concerning medical conditions and financial fitness and the sheer amount of mental fortitude and support networks to determine if they can provide the best home possible for a child. And frankly, if half the world thought about it the way these people ponder, we’d have some better off kids as a result. It’s unfair to children to give them selfish parents that want their baby to be nothing more than an accessory. It’s not all cute baby girls matching your shoes and purse or boys playing left field just like you did; a baby is not meant to coordinate with your aesthetic and be your adorable mini me because that child is a person with its own wants and will – the kid you fantasize about is not always the kid you get. Not everyone thinks about colic or heart deformities or childhood cancer when thinking about bringing a whole human being into the world, someone who is not going to be exactly what you want, but someone who you should love without condition. There’s a lot of thought that goes into the deeply personal decision, and it’s one that’s still heavily shamed by society. And this show takes the easy way out by giving her an exit to avoid uncomfortable conversations. Robin doesn’t have to explain away her personal choices anymore – she’s suddenly the point of social pity because the poor lamb can’t make babies; her life will always be sad and will never be complete because she lacks this ability according to the smug people that mocked her in the first place for knowing her own limits. It’s a point of sorrow and understanding rather than the chance for others to expand their social expectations and commend someone for knowing the kind of life she wants and how she wants to get it. And that pisses me the fuck off because it doesn’t just insinuate that Robin didn’t know what she wanted; it made sure to rub her nose in it and soundly box her ears. 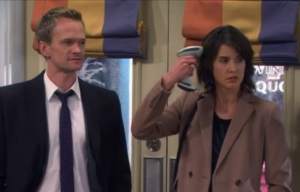 After being around other parents, I totally get this reaction.

Later in the series, Robin’s inability to bear children is used as a type of get-out-of-jail-free card (case in point: arguments with Barney’s mother right before the wedding). To have Robin suddenly treat an inability to have children as some sort of boon when she never, ever wanted kids is unfair to her and a growing slice of women and men out there. How I Met Your Mother had the chance to present a woman who was assured in her choices despite the great prejudice toward people who don’t want kids. The show should have stuck with its characterization to lend a much-needed voice to childfree by choice folks. Instead, it chose the mocking and cop-out that most of the childfree by choice community experience. That treatment must stop. If our sitcoms reflect our social values, we still have a long way to go with not judging those of circles who simply don’t want to have kids. Everyone deserves that choice, free of scorn and “I told you so” logic. We all deserve personal autonomy.