Warning: count(): Parameter must be an array or an object that implements Countable in /homepages/45/d96662078/htdocs/clickandbuilds/TheBackseatDriverReviews/wp-includes/post-template.php on line 316
↓
Home→Family→Battle of the Sexes: Gender in A Quiet Place

**WARNING: This post contains spoilers for a film that is currently playing in theatres.**

First off, a slow clap for John Krasinski. The man managed to get movie going audiences to do something they haven’t done in ages: people shut the fuck up and watched a movie. Where I was sitting, no one checked their cell phones, no one asked what was going on, no one giggled at inappropriate moments, and no one ate snacks. It was fucking heaven. Mr. Krasinski, I owe you so very much. Especially after some of the horrendous movie going incidents I’ve experienced in recent years, most notably the drunk chick that laughed through a lovingly-staged retro viewing of The Thing (HOW DO YOU LAUGH AT THE DOG SCENE?!). You have warmed my cold, dead, cynical heart, sir. 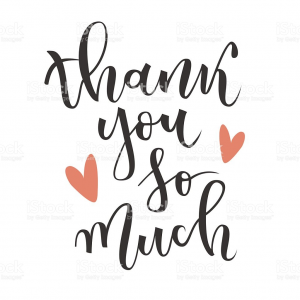 So yes, A Quiet Place. Watching it, I was struck by how much it emphasized traditional gender roles, and how much it managed to subvert those same traditional expectations of the sexes. Those two standpoints don’t seem to pair well together at first glance, but I promise you, it’s all going to make sense in a few minutes. 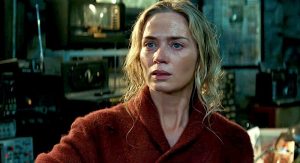 On the surface, this film assigns home maintenance tasks to the Abbott family that align with the traditional hallmarks of gender roles. Father Lee (Krasinski) functions as the hunter/trapper and main Mr. Fix It; mother Evelyn (Emily Blunt) cooks, tutors, washes clothing, and prepares for impending childbirth, with the assistance of daughter Regan (Millicent Simmonds); son Marcus (Noah Jupe) is learning the ropes of provision in the event that something happens to dad Lee. These tasks are fairly gender segregated: males do the heavy lifting of technology and food provisions, while females attend to the home by cooking, keeping everything tidy, teaching, and providing sage-like hugs. (Sidenote: after watching this film, I kind of want Emily Blunt to tell me that everything is going to be okay.) The film features several telling moments that work to reinforce these gender roles: Lee takes Marcus fishing and then to the waterfall; Regan is told to stay behind and help her mother with chores rather than learn to fish; Evelyn gives a moving speech concerning the need for Lee to look after the children rather than focus on her; Lee instructs Marcus to detonate the fireworks to aid a laboring Evelyn; Evelyn reinforces to Lee that his role is to protect the children and not her. These tasks appear divided by gender: men go do the manly things like hunting and saving the day, while the womenfolk stay home, growing babies and doing laundry while dinner steams. 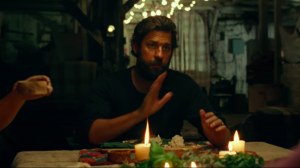 Finally, peace and quiet at the dinner table.

However, the film’s characters are so much more than what their actions appear to be on the surface. When Lee takes Marcus out to the river, it’s not because the kid is a better trapper than Regan – Lee needs to show the terrified child the acoustic principles of the waterfall so that Marcus can thrive in his current circumstances. Marcus is not the blazing superstar of potential here; Lee openly acknowledges that Regan can function just fine on her own, and as a parent, that’s not being sexist – that’s knowing which child needs the extra attention, much like he signs “I love you” to his doubtful, guilt-ridden daughter before he sacrifices himself to save the besieged children. It’s the difference between playing to strengths and intentionally withholding based solely upon gender. Likewise, we see Evelyn lovingly teach her children, prepare meals and oh yeah, birth an entire human being, later grabbing her newborn and pulling it to safety while one of the Death’s Angels creatures searches the flooded home. The argument’s there that Evelyn provides the stereotypical gender role of nurturer, but Evelyn is a damn lion. She navigates a creaky house with an injured foot while in active labor – from a person who has both sliced her foot open on a broken Lego and labored quietly, fucking respect, Evy. On top of that, she also manages to move about shortly after giving birth and wields a shotgun to protect her family. And Regan? Lee’s absolutely right in that she can take care of herself, especially considering that her hearing loss ultimately gives her a valuable weapon. She goes from disabled teenage girl who doubts herself to galvanized fighter in a span of five minutes. There’s not a single thing that’s weak about the resolve of these women; they don’t exist solely as the makers of dinner. 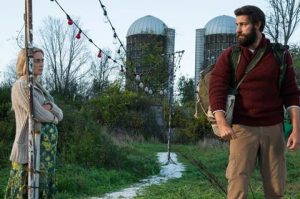 It’s not just about staying behind.

More telling, though, is the end game. Really examine the fates of these characters: Lee sacrifices himself to save his endangered children; Regan weaponizes her hearing aid to take down the creatures; Marcus cowers in the corner with his newborn brother; Evelyn pumps a shotgun, ready to take down the remaining two creatures. Notice a trend here? The female family members experience physical pain and disadvantage but still manage to come out on top, while the male family members are either paralyzed with fear, physically helpless, or used as sacrifice. In other words, the women are strong survivors, while the men are expendable. Again, we’re going to take a page from The Price is Right and say, “That’s not all!” Krasinski doesn’t make the theme into an argument of which gender is better: he focuses on how the gender dynamics work in tandem to create a more cohesive whole that ensures survival. This isn’t a competition because the family needs one another to function at optimum potential: Marcus needs to become a more confident contributor; Regan wants to hear and fight; Evelyn needs help when she’s close to giving birth; Lee wants to keep his family safe. No one in this family is a weakling – everyone is brave. The risks and actions each family member takes – even if it’s admitting when they’re scared – works to advance the family. Not once do we get the message that someone can’t take care of themselves due to their prescribed gender role; we do see these characters throw down and play to one another’s strengths. Therefore, we’re not left saying, “Girls rule, boys drool!” and making blanket statements about who’s better off after the apocalypse. While those elements exist, we realize that to go the full distance, they need one another. Survival is not a competition to the Abbott family – it’s an active, ongoing process that requires the skills of each member. 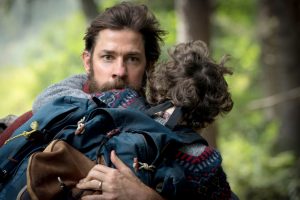 All in this together.

The family’s survival thus depends upon the members of the family working together to identify strengths and weaknesses. It’s not about gender: it’s about the ability to give individual attention to the needs of the person for which you care to make sure they see tomorrow. It’s not giving because it’s what’s traditionally expected of your gender role – it’s being there for someone you love, and making sure the team succeeds. This is how wars are won: when everyone stops saying, “I can’t,” and focuses instead on what they do best.