Warning: count(): Parameter must be an array or an object that implements Countable in /homepages/45/d96662078/htdocs/clickandbuilds/TheBackseatDriverReviews/wp-includes/post-template.php on line 316
↓
Home→Animated→Weekend Movies: Five Reasons to Watch My Neighbor Totoro

Some films just fit right into the self-care rituals we develop for ourselves – they can be sweet, or savory, or a careful nudge into relaxation. Some prefer gory fare (no judgment here – Battle Royale is my go-to after a bad day), while others prefer something fluffy and childlike. Hayao Miyazaki’s My Neighbor Totoro is delightfully in the second column. The film is the story of young sisters, Satsuki and Mei, who relocate with their father to be closer to where their ill mother is recovering at a local hospital; there, they’re befriended by a friendly nature spirit that makes them feel like they can change the world. Here are five reasons to watch it. 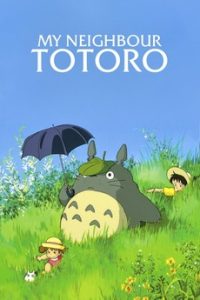 Ponyo had one thing that annoyed me: a child that was wise way beyond his years (seriously, Sōsuke just needed a briefcase and a tenure track position at a local college). The beauty of My Neighbor Totoro comes in the form of capturing a pair of truly remarkable voice acting, in both its Japanese and English tracks. Norika Hidaka and Chika Sakamoto are great in Japanese, but the 2005 Disney track featuring Elle and Dakota Fanning just pulls at my heart. They really, truly are little kids who just have a blast, and believe me, that’s tough to capture with some child actors.

#2 – A peek into the aftereffects of a major event

Blunt conversation: Satsuki and Mei’s mother is in the hospital with a none-too-veiled allusion to radiation poisoning. Miyazaki made no qualms about tackling some pretty crappy aspects of post-WWII life in Japan, and this is no different. It’s seen through a child’s perception and an adult’s careful shielding from a difficult, terrible reality. That balancing act is something we do so often with our children, to cushion them a bit from how bad things can get. I had a cancer scare once, wherein I asked myself, “How can I make this less scary for my kids if this is it?” To go at a huge piece of history in a nuanced, careful manner that’s mindful of the little kids living its aftermath… it’s well done. 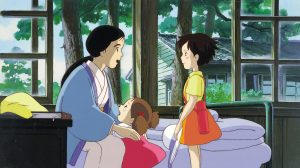 I’m going to go hug my knees and sob.

#3 – The emphasis on nature

Par for the course with Ghibli here, but there’s a huge reverence for nature and the wonders it brings, from raising a crop to the protections it provides us. Say what you want about Studio Ghibli, but this is one company that gets the fact that we’ve only got one Earth, and we should respect it. Considering that there’s an ice storm going on while I’m writing this while parts of the U.S. are getting summertime weather, the messages of the studio’s films are not lost.

When you’re little, there’s magic everywhere. It’s so easy to believe in Santa and Halloween and the magic of a field of flowers because those are breeding grounds for adventures. It’s so easy to lose yourself in that magic, and that’s what it is: it’s out-of-this-world fantasy that absorbs you and brings joy. People lose the ability to see dragons in clouds when they’re little, or soot sprites in a dirty attic. I personally love the notion of the supernatural being more open to children – they’re not as jaded. Unless if you’re my kid around the age of 5. Then you’re totally jaded and you’ve missed that boat. 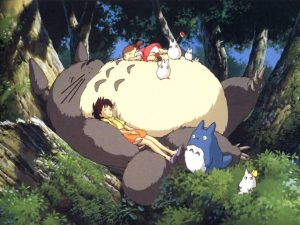 I want to spend my days napping on Totoro’s belly.

#5 – The warmth of a Miyazaki movie

This film is the equivalent of a mug of hot chocolate and a warm blanket. This film essentially functions as a comfort to a harsh world. When the world is scary – when your loved ones are sick, when you are someplace new, when you feel like you’re tiny and can’t affect change – there’s someone there to provide that comfort and consolation. You’re a little kid sleeping on Totoro’s tummy. That feeling you get when you watch it… that’s the real gift of this film. There are no words.