Warning: count(): Parameter must be an array or an object that implements Countable in /homepages/45/d96662078/htdocs/clickandbuilds/TheBackseatDriverReviews/wp-includes/post-template.php on line 316
↓
Home→Relationships→Be Careful, You Don’t Want to End Up Like Nancy: Social Dynamics in The Craft (1996)

The Craft (1996) is basically the Emo Witch Chick Starter Pack film. I am proudly proclaiming myself to be a member of that club: I practiced paganism until my mid-20s starting in my teens, and to this day, I still follow the heavily-lined eye makeup look (you say “potato,” I say “Edwige Fenech”). Ultimately, the movie taps into the notions of acceptance and social tribe that so many lost guys and gals fall into during their formative years: the need to belong, the need to find others like you, the desire for something supernatural to assure you that you’re both special and worthy of protection from those that torment you. With this power, though, comes the risk of social patterns repeating themselves, which is why The Craft has such a crucial core message at its climax: don’t gang up on someone, and learn how to stand on your own two feet. 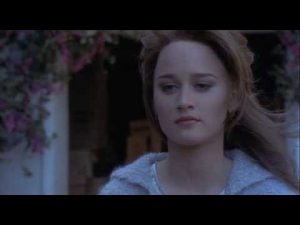 Stare ’em all down.

When we meet our core coven, we’re drawn to them because they’re the underdogs. Ringleader Nancy (Fairuza Balk) doesn’t fit in because she lives in a trailer, worships the old ones and dresses in black, with thick layers of makeup. Bonnie (Neve Campbell) is sweet and shy, but heavily scarred and therefore deemed ugly and harassed by her peers. Rochelle (Rachel True) has a flaming racist piece of crap up her ass – played by Marcia Brady (Christine Taylor), no less. Sarah (Robin Tunney) is the new girl in school who has false rumors spread about her in an act of slut shaming meant as punishment for rejecting the school jock. We like them because they’re less fake than the rest of the school’s population, and they get picked on for reasons we either rightfully view as unjust or have experienced ourselves. We hate their tormentors, and we want not only for these ladies to rise above what ails them, but to give those jerks their just desserts. 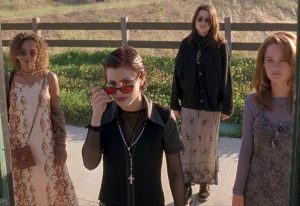 The problem comes when Sarah and Nancy clash. Nancy uses her powers for destruction and chaos, as evidenced by the line of dead whales left in her wake on the beach. She kills her abusive stepfather, which we can excuse because he was clearly a garbage person who was harming the women in his life; it’s easier to excuse that because it seems more just. However, Nancy when tries to seduce Chris (Skeet Ulrich), we enter a gray area: on one hand, Chris attempted to rape Sarah and has been hinted to have mistreated Nancy in the past; on the other hand, Nancy has clearly moved beyond righteous vengeance and is power tripping. Nancy clearly plays cat-and-mouse with someone because she can, and this action makes Sarah and the audience uncomfortable. Sarah calls her on this, and the response from the group is to turn on Sarah for questioning the supreme leader. It’s not like the three teenagers are shunning her at lunch, either: they make Sarah believe that her dad and stepmom have been killed, then enter her home to try to kill her. The reaction is fairly extreme, as a simple, “Let’s not hang out anymore” would do in most circumstances. 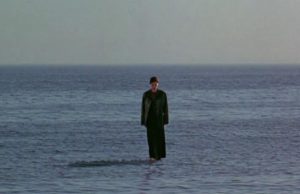 The problem here is that three quarters of the coven comes full circle, proving that they are pack creatures rather than autonomous units that can come together to form a more powerful whole. Nancy wants to be the leader and does not take well to her perceived subordinate questioning her authority; Bonnie and Rochelle follow suit, demonstrating their deference in the hierarchy. As a result of the showdown with Sarah, Nancy is driven insane while Bonnie and Rochelle lose their powers. The pair then comes back to Sarah, asking if she still has her powers and if she wants to chant with them sometime – snickering when Sarah blows them off that she probably doesn’t have powers either. However, it’s Sarah – the one who took the stand against the harsh leader and had the confidence to not go back to a toxic social group – that summons up the lightning that strikes a tree branch and nearly crushes both girls. Without having to say very much, the audience realizes that Sarah was the power source that shared her gifts with those she felt to be equals and friends, and her maturity places her into a leadership role while the rest would rather receive directions. The resulting message is clear for the audience: go along with the crowd, and you’ll alienate others and eventually turn on someone for disagreeing with you, losing yourself in the process and becoming what you dislike. If you’re confident enough to not question your principles, you’ll survive and wind up as the victorious party, the reward of which is autonomy and confidence. 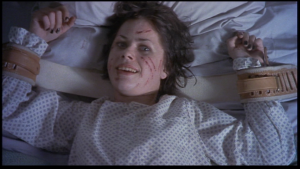 The final note of The Craft is a haunting image: Nancy, lying on her hospital bed, hallucinating by herself. She went from having a limited friend group to a massive amount of power to being trapped in her own imagination. When given the chance to become part of a larger social contract, Nancy chooses to dominate her own tiny pond, which leaves her with nothing in the long run. She becomes a reflection of the same system that victimized her in the first place, proving that if you can’t rise above your circumstances and be your own person, you’re sunk.