Warning: count(): Parameter must be an array or an object that implements Countable in /homepages/45/d96662078/htdocs/clickandbuilds/TheBackseatDriverReviews/wp-includes/post-template.php on line 316
↓
Home→Horror→Weekend Movies: Five Reasons to Watch The Devil’s Doorway (2018)

The older I get, the more of a scaredy cat I become. I’ve gotten to be such a giant chicken that I will watch horror movies in the daytime from the comfort of my living room, the exception of which was Hereditary (2018)… one which left me checking the ceiling corners at night. I’m interested in knowing how I got to this point, but there are far larger fish to fry today. Namely, you need to watch Aislinn Clarke’s The Devil’s Doorway (2018), her directorial debut about a pair of priests that head to investigate a Virgin Mary statue that cries blood at a Magdalene laundry in 1960s Ireland. This gets a coveted Well Played label from me, it’s that good. Here are five reasons to watch it this weekend. 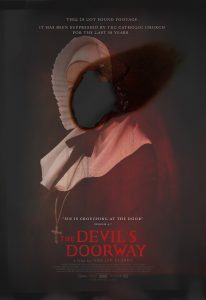 The timing on the release of this film is so crackerjack you can’t help but wonder if the stars were consulted and aligned perfectly for its release. At the time of writing this article, the Catholic Church was being rocked yet again by allegations of corruption and child molestation; I’ve depressingly lost count at this point, because you’d think that a building with fucking rats in it would figure out how to clean house and prevent future infestations. And you know what? Church officials can say “sowwy” and bow their heads solemnly, but it doesn’t change the fact that people cared more about an institution’s reputation than the world of suffering little kids had to endure. I have no problem with religion, but when religious institutions pull crap like this and demand instant forgiveness/forgetfulness, it’s easy to see where people paint with large brush strokes. The coverup parallels to modern headlines and relived traumas are strong here, and they are fire. You’ll wince at the smack down, because the modern context is perfect.

This is another chapter in religious history where officials and participants should hang their heads in shame, ask for forgiveness, and take any damnation – legal, social, financial or spiritual – that they have coming to them. For those of you unfamiliar with the term, Magdalene laundries were places where “fallen” women were sent – everyone from prostitutes looking to make ends meet to rape victims to pregnant teenagers who couldn’t access birth control to mentally impaired and unstable young girls and women. These women were put to hard labor and often had their babies taken from them at birth, regardless of what they wanted. Let’s call it what it was: slave labor and kidnapping under the guise of religious repentance and messed up social conventions. Watch this and feel sick, because how the girls and women sent here were treated is horrific, even without the supernatural conflict of the film. Clearly, the world still needs the reminder that this happened. As someone who had an unplanned pregnancy  as a teenager, I am forever thankful this was not my fate. I hope it never has to be anyone else’s either. Basing a horror story off of an already horrifying, real-life event just makes it more realistic and scary. 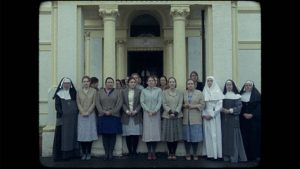 The setting will break your heart.

So often, found footage films like to shake a camera and call it riveting when all that technique does is frustrate an audience and make us want to puke. I’m looking at you, As Above So Below (2014). Effective found footage can be so much more than that: when done properly, the audience gets the chance to become both observer and participant – a pretty nifty trick that suspends disbelief seamlessly. There’s a sense of foreboding between direct camera address and action, which places us in the position of the survivor that got out while developing attachment to the protagonists. This film clocks in at 75 minutes, and it’s a harrowing 75 minutes that has us wondering what waits us behind the next turn. Any film that can successfully get me nervous for flickering lights in the age of desensitized viewing is good in my book.

Well, well. In addition to making your heart pound, this film cares far less about gory special effects than it does about scaring the ever-loving shit out of you with lighting, camera angles and a solid plot. Sometimes, a film will show you a realistic dismemberment for one of two reasons: it wants to make the action more realistic by showing more detail, or it wants to shock you into a reaction that you’ll misinterpret as being scared. The Devil’s Doorway doesn’t have time for that – it knows that some of the worst things that could happen involve the fear of what’s behind the door at 3 AM. That’s refreshing. Just because you can show it, doesn’t mean you have to. 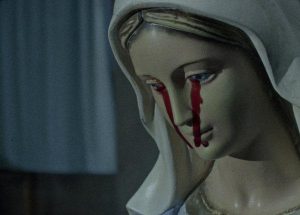 There are some really creepy aspects in this film that director Clarke makes sure we see. Without spoiling… keep your eyes peeled. There are several tiny things that last for maybe a second or two but are effective and spine-tingling. Clarke knows how to position a camera and how to insert little grisly details with deft skill (if you message me on Twitter – @bsdriverreview – I will be more than happy to share the scene wherein my skin crawled). I really enjoyed her narrative technique, especially in how she focuses and doesn’t flinch. I look forward to seeing what she cooks up next, because if this is her out of the gate, then we’re in for some serious treats.

The Devil’s Doorway is available for streaming on Amazon in the U.S. For our U.K. friends, if this comes anywhere near you on the festival circuit: RUN, don’t walk.