Warning: count(): Parameter must be an array or an object that implements Countable in /homepages/45/d96662078/htdocs/clickandbuilds/TheBackseatDriverReviews/wp-includes/post-template.php on line 316
↓
Home→Horror→Close Enough: Inadequacy in The Legend of Hell House

John Hough managed to successfully do something in 1973 that people still struggle with today: adapt a Richard Matheson book without killing it. Yes, that’s a pot shot at the 2007 monstrosity that is known as I Am Legend, which still sends me into an unholy rage. Really, I could rip a phone book in half if you handed one to me right now. The clear winner in adaptations here is The Legend of Hell House, which was scripted by Matheson from his book. The transition worked so well, in part because it retained so much of the characterization and theme from its source material. While some could argue that it represents the struggle between the female (Pamela Franklin’s Florence Tanner) and the male (Roddy McDowall’s Benjamin Fischer, Clive Revill’s Barrett), you’ll find that it functions at a deeper level than that: it’s the confrontation of inadequacy and all of its trappings.

It’s easy to see where one could interpret this film as the feminine versus the masculine. In 1973, the social climate was such that men and women were effectively divided into two teams: the traditionalists that wanted the gender roles to stay the same thankyouverymuch, and the feminists who were quickly gaining steam in their fight for equality. In The Legend of Hell House, we get representation on both sides. Revill’s Barrett is dismissive of Tanner, openly mocking her and maintaining a methodical, scientific approach with an air that he knows far better than the hippy-dippy medium. He’s also impotent and can’t satisfy his much-younger wife, Ann (Gayle Hunnicutt), which is a bit of a criticism toward the effectiveness of his alpha-male need to know everything. It’s satisfying to watch someone who mansplains struggle with the fact that his wife is sexually frustrated because he can’t get it up; score one for the feminists, who have their own representation in Tanner. Tanner is young, passionate, and recognized as extraordinarily talented – after all, it’s her skill as a mental medium that gets her a spot on the project to study Belasco House, which is regarded as “the Mount Everest of haunted houses” and holds evidence of life after death. Tanner has the goods to get her on an equal playing field, but at the same time, she is so unbridled in her approach that she does some damage to her campaigns. You needn’t look further than the manifestation of physical mediumship: rather than praise the new abilities, she and Barrett argue over the nature of the spirits in the house, and it ends with Tanner stalking about declaring that she’s going to prove that she’s right. While some may interpret this as determination on her part and bull-headedness on Barrett’s end (to which they’re correct), you have to admit that as a viewer, Tanner begins from that moment on to fight every other character on every other issue the moment that the other party does not agree whole-heartedly with her. In this sense, she’s extreme. It’s tough to watch because while we want to get behind Tanner, she does not allow for other information to enter into the equation; she’s choosing the be stunted rather than grow, which puts her in the same category as the churlish Barrett. There are no winners there. 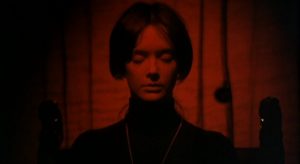 However, if you’ve noticed, I haven’t quite gotten to McDowall’s Fischer, who functions as a neutral party because he’s not focused on the sexual politics of the house – he’s more interested in survival, which requires a well-rounded look at everything around him. Fischer makes it clear that he’s involved with the project because he’s had previous experience with the house wherein people were killed; he wants to prevent that, as the event destroyed his psyche and self-worth. Fischer’s a broken man, a prodigy who has fallen from glory. The minute that Tanner manifests physical medium abilities, he grows concerned rather than celebratory because he knows that the house is starting up. The response he gets from other characters is an attack on the fact that his life has fallen to pieces since the incident in Belasco House 20 years prior. He flits aimlessly through life, a shadow of what he once was in his glory days. At one point, a possessed Tanner hisses the best line of the film at him: “You may have been hot stuff when you were 15, but now you’re shit.” The statement is designed to slap at his pride, and call to attention the fact that this man peaked young and has been on a steady decline. On the outside, McDowall makes sure that we see the stung look when Franklin delivers the scathing line; however, his character Fischer continues to confront Belasco-as-Tanner, because he realizes that her life is worth more than his broken pride. Later on, though, the roles get reversed when he faces off against the spirit of Belasco, screaming the concealed truths Belasco has kept carefully concealed. Belasco is referred to as the son of a whore, and revealed to have stood less than five feet in height before he lopped off his legs and had them replaced with metal protheses. The lead room has functioned as a way to seal off Belasco’s angry presence so that he can continue to live in a sealed-off fashion, away from the criticisms of others, ruling the roost with an iron fist. Belasco gets to keep being the tyrant with the money and the power while hiding the pieces of himself he doesn’t want others to see.

This drastically changes the meaning of the film. Sure, we had the conflict between Barrett and Tanner (or Tanner and the rest of the house), but in the end, those two die. In their quest for supremacy, neither could let the possibilities the other had to offer in, marking them as unable to adapt and survive. Fischer, though, confronts not only his shortcomings, but those of others. Belasco picked the wrong target: he was banking on someone that he could demean and therefore control. Fischer is a good one to pick on: he was once successful and has now fallen pretty low. It’s when Fischer turns the tables on Belasco that the latter is forced to confront the things that set the entire story into motion. Belasco despises everything about himself, from his parentage to his height; he attempts to atone for this by earning money and controlling everything around him while hiding these aspects so that no one else can criticize. Belasco even attempts to gain power over death, which is something unknown and therefore scary. Fischer exposes the truth, and the reward for the audience is a low scream from the spirit of Belasco. This whole thing – the violence, then death, the haunting – happened because some douche had a Napoleon complex that he refused to face head on. It’s an extraordinary statement on how far someone is willing to go in order to refuse looking in the mirror. 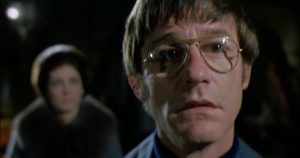 Unrelated: those glasses are magic.

The film ends with Fischer switching on Barrett’s electromagnetic machine and exiting the premises with Ann, expressing a hope that Barrett and Tanner will escort Belasco to the afterlife. It’s intriguing wording, as it leaves open the possiblity that Belasco may refuse to move on, challenging the inevitability of electromagnetic science versus the will of the human spirit. And therein lies the grand debate to which we must be open: is it all inevitable, or do we get a say in digging in our heels and refusing to let something change? Can we really run from that which ails us, or is it going to catch up eventually, inevitability?