Warning: count(): Parameter must be an array or an object that implements Countable in /homepages/45/d96662078/htdocs/clickandbuilds/TheBackseatDriverReviews/wp-includes/post-template.php on line 316
↓
Home→Children→Weekend Movies: Five Reasons to Watch Hellions

Okay, let’s do this. It’s Halloween season. There are tons of scary movies out there, and if we’re being brutally honest, you’re not going to like all of them. Some of you will loathe and detest 2015’s Hellions. I happened to like it. It’s about a pregnant girl that has to fend off some nasty trick-or-treaters on Halloween. It’s streaming on Netflix right now. Here are five reasons to watch it this weekend.

Full disclosure: I was pregnant as a teenager. It’s a gut punch regardless of the pregnancy outcome. As teenage girls, we’re often told to keep our legs shut, and we’re the ones that get the brunt of the fallout from an unplanned pregnancy. Watching Dora (Chloe Rose) find out that she’s pregnant and then try to think of a way to tell the father while still reconciling the reality of her situation… it’s a lot. I found it to be well-done. It definitely gave me pause.

It’s Halloween, so why don’t we exploit some tropes? Always a sure-fire hit: the creepy child. Want to make it even creepier? Put that kid in a mask. Want more creepiness? Put give that kid a demonic growl and clawed hands. Still not enough? Multiply those little shits like gremlins. Never, ever underestimate the power of a group of creepy little kids. It’s enough to make you want someone to rip your uterus out and slap you across the face with it. 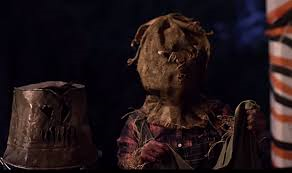 Get off my goddamned lawn.

#3 – The hardest working red lipstick in the business

This is a dumb reason, but I found myself completely thunderstruck within the first few minutes of the film. Dora’s red lipstick does not budge through dialogue, smoking and kissing. That shit just stays there. You need to understand this if you’ve never worn lipstick: it smudges like there’s no tomorrow. You practically have to hydroseal that on you. So to have it stay put with nary a hint of transfer… the girl in me is slow clapping in astonishment. Hats off the the head of makeup on this film, Andrea Brown. Just, wow.

I really dug that half of this movie was lit purple. Purple is one of my favorite colors, and it has some rich symbolism behind it (royalty, properity, good fortune). Usually when we see skewed reality, it’s blue or gray. This was a nice pop of color, and just outside of the norm to where it worked but we could still tell which angle was the aim. I liked it.

#5 – It was directed by Bruce McDonald

McDonald did one of the films that I absolutely adore for its ingenunity and execution: Pontypool. I’m not one to let an entertainer rest on the laurels of something done previously, but Pontypool makes for a convincing case because it was so tense and so, so good. Hellions had a similar effect on me: it took serious subject matter and made it into a horror story. So often, we see that go pretty poorly. This to me proved that McDonald knows what he’s doing. Was it perfect? Nope, but we can’t expect perfection. We only get one Orson Welles or Tommy Wiseau in a lifetime. McDonald is one I’m watching. 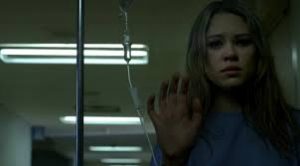 The shots are pure McDonald.

Again, not everyone will love this. However, if you have an hour and a half to spare, I suggest this one for the scary season.