So after some wrestling about, there’s been a decision made: we’re taking the week off between Christmas and New Year’s. I know, I know – we plowed right through last year (by “we,” I mean me and the little gremlin I keep in my pocket at all times. His name is Dave. He likes candy.). This year, though… the gang is bushed. Talicia is United Nations of Horror’s librarian, as you know, and that requires some work; Nika is battling some dragons like the boss she is; Erin writes for three other sites and just got tapped for some more podcast work (because sleep is for suckers); Dan is wisely hiding. We need a break. So you’ll be getting us this week and next week, and then we’re peacing out for a some much-needed rest and relaxation. It’s a good thing we have razor-like focus until then. 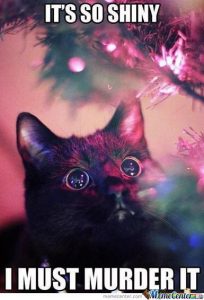 This is why we can’t take Erin in public.

This week, we’ve got trailers and snowy goodness in the form of survival in The Thing (the 1982 version) and a recommendation for Bill Murray’s holiday classic, Scrooged. We’ll also do our final Saturday Short of 2016 this week, so that we can make room for some fun stuff coming up next weekend. Don’t worry, it will be back in 2017.

Grab some eggnog and stare at something shiny, gang.