On a totally random note, can we all just get as excited as Michael Stipe in the “Shiny Happy People” video? 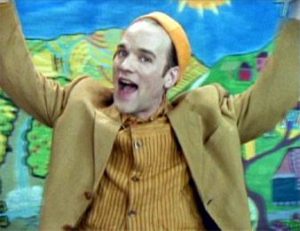 I don’t know about you, but I’d really love to be that kind of excited about stuff. Speaking of exciting… we’re talking Adventure Time this week. I am going to miss the living shit out of this show when it ends in two months. I will seriously need to console myself with ice cream and a blanket fort. Viva la fort. Until then, we’re going to talk about how Princess Bubblegum and Lemongrab are way more alike in their leadership styles than we care to admit. After that, since we’re on an animation kick, we’ll recommend 2009’s 9, which I still think hasn’t fully found its audience because it came out before people were ready for it. So here’s to animation and the folks who make it, because I clearly lack the patience to do so myself.