Warning: count(): Parameter must be an array or an object that implements Countable in /homepages/45/d96662078/htdocs/clickandbuilds/TheBackseatDriverReviews/wp-includes/post-template.php on line 316
↓
Home→Reality→Death to the Demoness! Simulation Theory and Cronenberg’s eXistenZ

There’s a fun joke that once 45’s presidency was announced, NASA sent various probes out and found multiple habitable planets with enough room for everyone. That’s a humorous, if not attractive thought, but it got a lot of people pondering: what if we could live on another planet? And the billion-dollar question came shortly thereafter: what if our version of reality isn’t real? What if this is just some simulation? What if we’re all part of some elaborate program with no rhyme or reason, or worse, that we exist inside of a rule matrix that causes pain and suffering at the hands of a programmer or end user? Many will point to The Matrix as the film that primarily tackled this one, but you’re remiss if you overlook a film that stared even longer and harder into that abyss: David Cronenberg’s 1999 effort eXistenZ. 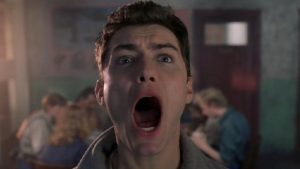 The future is worse than you thought, Jude.

Some background on eXistenZ: Cronenberg wrote and directed the film in 1999, which was made for $15 million USD. The film didn’t do so well at the box office, taking in just under $3 million USD, but it’s managed to pick up a cult following due to three equal factors: Jude Law is young and hot (pre-trainwreck-that-can’t-figure-out-how-a-condom-works Jude Law), Jennifer Jason Leigh is batshit compelling as per usual, and the film features the strange bodily imagery we’ve come to love and expect from Cronenberg. Cronenberg doesn’t disappoint here, as he crafts a society sharply divided into two factions: avid gamers who live for the immersive games that attach their spines to a gaming port via umbilical cord-like devices, and violent “realists” who view the games as robbing players of their real-life experiences and mental faculties. These groups converge during a test of “eXistenZ,” a game in beta testing from renowned developer Allegra Geller (Leigh), who escapes an assassination attempt during a testing session thanks to her bodyguard, Ted Pikul (Law). Geller insists that her baby – her beloved game – needs to be played to make sure that it’s still viable, cooing at it and treating it as a living, breathing entity. After all, she’s mommy to this creation – Allegra Geller is the name for god for not only the game, but to those who play it. Geller is the last woman standing in the beta test, which reveals that she was actually part of a group testing it… and that she and Pikul are there to assassinate the true creator of the game. The film infamously ends with a question to the main characters, revealed to be assassins fighting against the true game’s creator: “Hey, tell me the truth: are we still in the game?” 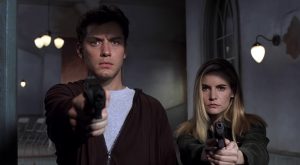 Just another day at the office.

The conflict between game and reality is one that has been of concern for years, but has resurfaced noticeably recently. Going way, way back, the concept known as the dream argument goes as far back as Plato and Aristotle, echoed by the likes of Descartes and Zhuangzi: if this is all one big dream, how do we differentiate between what is the dream and what is the “real” life we have when we’re in the dream? (Somewhere, a philosophy thesis just cried itself to sleep.) Last year’s Isaac Asimov Memorial Debate, held at the Museum of Natural History, saw moderator Neil de Grasse Tyson express a belief that our probability of living in a simulation is pretty high, with other scientists and philosophers discussing the possibility as a true possibility rather than some out-there, nutty theory[1]. On top of that, technology wunderkind Elon Musk has not only endorsed this possibility, but has also reportedly barred all discussion of simulation being the real root of existence from casual conversation[2]. I can’t blame Musk there, as he has been rather vocal in the past concerning what Artificial Intelligence means for the nature of the human race – specifically, that we’re posed to grow exponentially, and the end of our civilization might just mean that the simulation here has stopped somewhere else. For Musk, it’s not zero-sum in the end if it all ends, which I guess is comforting, but still. The greater point: this could very well be someone else’s dream, and you could be a representation of another person that’s been integrated seamlessly in a controlled environment. It’s sick, but really, what’s your first instinct when playing The Sims? For many, it’s to make them pretty or grotesque, give them all sorts of materialistic goals, and if you’ve got a macabre streak, you torture them. Have to admit, at the current moment, this world does seem more than a little like a 5th-grade science experiment gone wrong. We’re currently a D- project that’s sitting on someone’s shelf gathering dust. 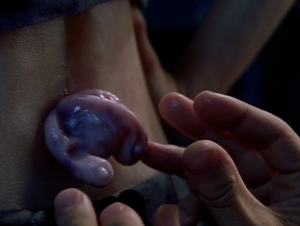 Even this is better than what we’re currently in right now.

So why does eXistenZ matter, especially if it came out in 1999? The film tackled a theme that its close colleague The Matrix did not: whereas The Matrix wanted liberation of the physical body and mind, eXistenZ seeks to punish those who pull the strings of humanity. Therein lies the difference: The Matrix gang (which sounds a bit like The Scooby Gang, only with more pleather and guns) wants us to find our own way and be the spiritual beings of light they know we all are deep inside, while eXistenZ wants our digital gods to suffer. In fact, that’s a term used by Allegra at the end of the film, when speaking to game developer Nourish (Don McKellar): “Don’t you think you should suffer for all the harm you’ve done and intend to do to the human race?” Geller doesn’t see Nourish’s creation as escapism or a feat of technology, which is how most modern gamers view their immersion: to Geller and Pikul, the immersive games are something that actively create more pain by robbing the players of reality and mental faculty – the games are pre-chewing the meat and taking out all of the meaning of life. The name of Nourish’s game is revealed to be transCendenZ, suggesting that his game will bring the players closer to a spiritual goal. Pikul echoes Geller’s sentiments though, asking Nourish, “Don’t you think the world’s greatest game artist ought to be punished for the most effective deforming of reality?” The use of the word “deforming” suggests that the simulation is a physical abomination, which is to be feared and shunned – it’s something that’s biologically maladaptive and needs to be purged to allow evolution to continue. This is an offense that necessitates punishment, and with good reason: not everyone in the game has a huge role, not everyone has a fully-developed personality/life, and violence often ensues because it’s all meaningless anyway. The game is a reflection of the world outside, with a sick concentration on causing death and destruction with the promise of a reset button, and no personal growth in between. If that’s our escape, how sick are we at our cores? Is the game fostering this sense of mutilation and self-gratification, without any further lessons that make us somehow better creatures? And should our creators be punished for the terrible things that happen in this simulation – from the pain of others to invasion of our bodies to play to the stunting of our spiritual growth? How much more would we be able to achieve if we’d just go outside and ride our bikes? 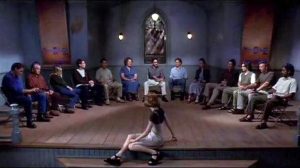 The notion of a simulation makes sense: no matter what, our world seems to keep going back to the same tried and true patterns, the way a game out reset to base level. Some folks seem to have gotten their hands on the cheat codes (how else do you explain the Kardashian family?) and are exploiting them for all they’re worth. There’s death and destruction everywhere, and sheer glee in unnecessarily inventive methods of carnage. Two questions still remain if this world is actually a simulation: what’s the real world look like if this is our escape, and when we wake up, will we know if we’re still playing or in the real world?

[1] Moskowitz, Clara. “Are We Living in a Computer Simulation? High Profile Physicists and Philosophers Gathered to Debate Whether We Are Real or Virtual – And What It Means Either Way.” Scientific American. 7 April 2016. https://www.scientificamerican.com/article/are-we-living-in-a-computer-simulation/