Warning: count(): Parameter must be an array or an object that implements Countable in /homepages/45/d96662078/htdocs/clickandbuilds/TheBackseatDriverReviews/wp-includes/post-template.php on line 316
↓
Home→Family→Weekend Movies: Five Reasons to Watch The Hamiltons

Sometimes, a horror movie is like pizza: it can be sweet or savory, satisfying and fast. Sometimes, though, we get to the classification known as “good enough” pizza: it passes for pizza, but it’s not the finest quality. Every so often, there’s a movie here that misses the mark a little bit, but we watch it anyway because it’s got a few other ingredients going for it that work well enough. Such is the 2006 film The Hamiltons, the story of a family of orphaned siblings with a secret. Some enjoy this movie; others don’t. Here are five reasons to give it a shot this weekend. 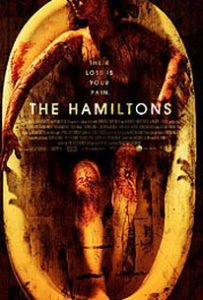 Younger Hamilton brother Francis (Cory Knauf) gets his hands on a video camera. This camera is our gateway into the family’s world, which includes memories of the orphaned children’s parents. There are little clues about what’s to come in some of these snippets, ranging from the squicky relationship between twins Wendell (Joseph McKelheer) and Darlene (Mackenzie Firgens), as well as our first hints that something is not right with this bunch.

While this film does have shades of drama, it’s also a horror movie at its core. Not just any kind of horror movie – it’s a captive movie. Our titular family has a habit of kidnapping teenagers and keeping them penned up in the basement. That’s half the problem: these kids are classmates of the siblings, which means that the minute someone goes into a pen, they’re fighting the clock until exposure. The beauty of a captive film means that there will be torture and death for someone. The Hamiltons doesn’t disappoint. 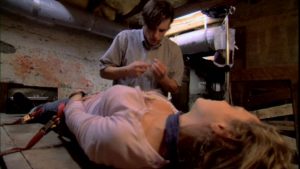 #3 – There’s something in the basement

Speaking of the basement, this film also has a creature aspect to it. All the while that we see teenagers get captured and thrown into the basement, we’re treated to glimpses of something lurking in the basement. We get the feeling it’s not quite human, and we’re not shown what it is until the last minute. I have to admit that the twist is pretty original in its explanation. The tension it produces is pretty good.

Eldest Hamilton child David (Samuel Child) is left to take up the mantle of patriarch with the deaths of his parents. Picture being in your 20s and having to care for two really close teenage twins and a third teenager that shows signs of feeling lost and confused, then throw in that everyone is kidnapping and murdering people in the basement. Yikes. However, David is willing to go to work and forego his own attempts at romantic connections (which lean toward other men) to take care of his siblings, and he’s willing to protect them right down to their strange activities. As the film goes on, this streak intensifies. It’s kind of nice to see someone who is that loving and protective of their family. 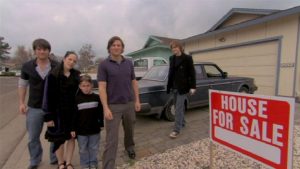 All in the family.

Between the Hamilton siblings, you’ll find a whole lot that is not being explicitly said. That’s half the fun of a horror film: trying to figure out what’s going on with whom. Who’s sleeping with whom, what the inner nature is that they’re fighting, what anyone really wants out of life. It’s a subtle reminder that often, we don’t really know the people we think we do. There’s always something lurking and unsaid.

You may have to dig around a little bit to find this one, but if it winds up being a stormy weekend, well, it’ll be a nice companion.