Warning: count(): Parameter must be an array or an object that implements Countable in /homepages/45/d96662078/htdocs/clickandbuilds/TheBackseatDriverReviews/wp-includes/post-template.php on line 316
↓
Home→Horror→Everything’s Not Lost: The Role of Guilt in Southbound

I walked into 2015’s Southbound knowing only that it was an anthology about Hell – I didn’t even know that most of this group was involved in V/H/S. I’m quite glad that I went in blind, as I enjoyed the film by not knowing its respective pedigree. I loved the approach and the shooting of it, which is a testament to the writing and direction (including Radio Silence, Roxanne Benjamin, Susan Burke, and Matt Bettinelli-Olpin). However, there’s something in there that hides in plain sight: the opportunity for change, and ultimately, salvation. 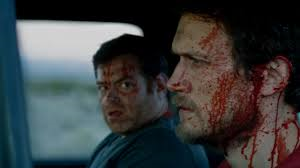 “The end is where we start from…”

To better understand this, we first have to review the order and plot of the installments. We begin with “The Way Out,” wherein Mitch (Chad Villella) and Jack (Bettinelli-Olpin) on the run from demonic creatures, only to be trapped in a cycle of either death or chasing a dead child longingly through a house. Next up, Sadie (Fabianne Therese) fights a cult in “Siren,” only to be hit by negligent Lucas (Mather Zickel)’s car in “The Accident.” After failing at saving her life, Lucas brushes the incident off and drives away, which leads into Danny (David Yow)’s attempt at rescuing sister Jessie (Tipper Newton) in “Jailbreak.” When that doesn’t quite work out, we’re returned to the town’s diner, where we then follow Daryl (Gerald Downey), Cait (Kate Beahan) and Jem (Hassie Harrison) as they fend off home invaders in “The Way In”… who just happen to be Mitch and Jack, seeking revenge for the murder of Mitch’s child.

That’s right, gang. This entire thing operates on one gigantic, hellish time loop, in which people are persecuted in the same cycle. The easy way out here is to explain the film as a comprehensive study in the destructive cycle of guilt. Mitch is trapped in a purgatory of his own making by continually chasing the child he couldn’t save; Sadie has arguments concerning the guilt of a death her friend Alex, and a repeated failure to save friends, which points to forever dooming her mistake; Lucas refuses to accept accountability for the death of Sadie because he’s too busy explaining away the accident while justifying that he attempted to save her life through surgical procedure; Danny fights to save his sister Jessie, who accepts her role as a murderer (and subsequent punishment in the town); Daryl has, in an implied fashion, murdered a child, who is avenged by her father. At each turn, the mistakes and subsequent guilt of the characters makes for someone who’s doomed to repeat actions that create a loop effect. 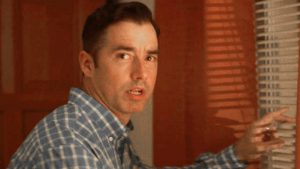 The cycle is not entirely destined, though. The writing team laces a clue into the speech of the DJ (Larry Fassenden) heard on the radio:

“Regret and remorse, amends and atonement – well that’s life, right? This next one is for you, for all those lost souls racing down that road to redemption and all you sinners running from your pasts, heading straight into that pit of darkness up ahead. We’re on the same endless highway, the one with no name, with no exits, looking for a way out of tonight. And you …. You gotta say fuck it…. Today might be the day you outrun those wicked demons once and for all…Because in the end, we’re all just trying to find our way home, right?”

Everything isn’t entirely doomed. The beauty of this time loop is revealed in both this speech and the title: south bound. There’s still time to change the course and re-route. The movie isn’t called Welcome to Hell Suckers or No Escaping This – it’s a direction that can be re-navigated at any moment for a different destination and outcome. How could this possibly work? For starters, look at Mitch and Jack. If they had decided to call the police rather than kill Daryl, Cait and Jem, they wouldn’t have become demons that give chase; if that doesn’t’ happen, there will be a ripple effect to Sadie, who might not be struck by a car by Lucas. The possibilities of course correction are numerous, and it all hinges on someone making a different choice. The time loop gives the option to make a different choice. 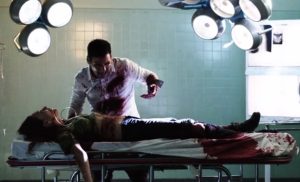 All of this could have been avoided if you had just gotten off your fucking phone while driving.

In taking a step back from the cycle of damnation and guilt, one can see how difficult the characters may find the task of breaking this cycle. However, it can be done. Someone just has to make the choice to do things a little differently, whether it’s accepting accountability or walking away from the hurt and frustration. No matter what, there’s always a chance, as our DJ tells us. You can always find your way home.