Warning: count(): Parameter must be an array or an object that implements Countable in /homepages/45/d96662078/htdocs/clickandbuilds/TheBackseatDriverReviews/wp-includes/post-template.php on line 316
↓
Home→Motherhood→For The Love of Your Child: Maternal Perspective in Aliens

James Cameron’s 1986 action/science fiction/horror offering Aliens is often studied for its treatment of maternity, and with good cause: it features a strong female lead willing to throw down for the safety of a child, a testament to the strong instinct to protect the young in the face of danger. Ellen Ripley (Sigourney Weaver) would rip heaven and hell apart for Newt (Carrie Henn) without a doubt. However, what if Ripley’s devotion to Newt isn’t the only maternal instinct on display? And shouldn’t we not only recognize it, but respect it just a bit more than it is? I’m speaking of the maternal instincts of the Alien Queen, whom Ripley encounters close to the climax of the film. 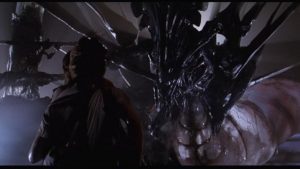 We don’t get the meet the Queen (whom have I nicknamed Queenie, and will be henceforth referred to as such) until very late in the movie, after the dastardly Burke (Paul Reiser) has already laid the groundwork for Ripley being Mother of the Year for the next four decades. Through his machinations, he’s quietly aided and abetted the Weyland-Yutani Corporation’s murder of multiple people in the name of developing weapons. When I say multiple people, I mean the entire colony LV-426, or Hadley’s Hope, has been wiped out, save for the scared, survivalist child that must be coaxed out of hiding and physically restrained. For those of you who like numbers, the casualties amount to 157 people before our rescue squad arrives. We watch a woman grieving her own failures as a mother (lest we forget, Ripley’s daughter died years prior while awaiting her mother’s return from space) take in a child who witnessed the violent deaths of her family and friends at the hands of an alien lifeform. This child is traumatized, yet she bonds with the woman who’s lost her biological daughter because she had to go into stasis to survive. It may appear to be apples and oranges, but Ripley and Newt have survived the same lifeform that has killed people that matter, and they bond over their losses, experiences and wills to survive. They create a symbiosis in which one fills the vacant role for the other. Ripley is therefore ready to take on an army of xenomorphs to defend her new baby, and she gets that chance when the little girl is abducted as a potential host and taken into the xenomorphs’ den. 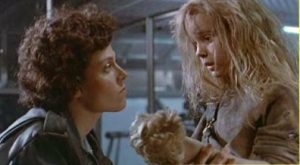 The prettier version of motherhood.

It’s in the den that we encounter Queenie, and here’s where we need to pay close attention to the situation and the surroundings. After pulling Newt out of her intricately-constructed spitball prison, the pair accidentally stumbles upon Queenie laying a bunch of eggs. Most xenomorphs need to reproduce via face hugger, which gestates and then bursts forth, but Queenie can birth facehuggers via detachable ovipositor. She is the Great Mother of the species. When Queenie sees Ripley, her immediate reaction is to hiss, which is natural: there’s an intruder near her eggs, and she wants those babies kept safe. Queenie notices that Ripley has a flaming gun, and she deduces that this creature in front of her – a food source and incubator for her children – can destroy those babies. Xenomorphs approach Ripley and Newt, but Queenie hisses to them, effectively calling them off. Queenie is willing to let Ripley walk out of the nest if it means her babies get to live. At this point, Ripley decides against the simple walk-out and torches Queenie’s eggs, triggering a chase, a harrowing escape, a nuclear bomb, and the eventual, infamous final battle between Queenie and Ripley. In the end, good triumphs over evil, Newt and Ripley are safe, and the mother/daughter duo are saying goodnight before getting a good, long nap. 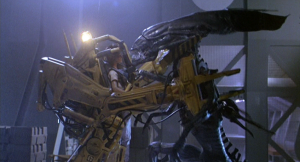 Except that when placed into the shoes of Queenie in a natural selection context, we can feel some sympathy here. The xenomorph species doesn’t try to fool others the way that Burke does: Queenie isn’t selling anyone out to the highest bidder. She’s not giving a kill order to multiple families of xenomorphs because she wants a private island in the Caribbean. She’s simply fulfilling her life cycle: eat and reproduce before death. To her, humans are the same as cattle and an incubator rolled into one – they’re a food source and a mode of reproduction. In this context, her actions are no different than the food sources we slaughter when consuming an omnivorous diet. She may be a violent life form, but really, find me a wild carnivorous animal that isn’t going to violently attack its prey to survive. What’s damning here is the fact that Queenie was going to let Ripley go. She saw the threat, assessed it, and thought of the safety of her children by allowing the threat to leave. She called off the cavalry that was rightfully coming to assist their leader and small children – essentially, this is hostage negotiation for the release of little kids from certain death. Queenie kept her cool in an attempt to make sure that no one hurt her babies. Do you know how many human mothers – myself included – are incapable of this concept? Some could argue that Ripley and Newt would have been attacked once they left the den, but we’ll never know that because Ripley decided to torch the eggs of an animal that backed down from a fight. That’s like gut-punching someone after they’ve already laid down the gun. It may have been smart on Ripley’s part in the long run, but in taking a few steps back to gain some perspective… it’s easy to see why Queenie flipped the fuck out. When you walk into someone’s home unexpectedly and threaten their kids, you walk out when the cops show up and the parents decline to press charges – you don’t throw a grenade into the baby’s crib. I’d chase Ripley’s ass into space and try to kill everything in front of her before killing her as well if she did that to me. 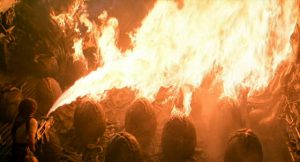 Which makes the film all the more interesting in assigning Queenie qualities like maternal instinct and revenge. She demonstrated an ability to logically deduce survival chances and bargain, then went into a rage when her young were killed. She’s capable of advanced thought, and demonstrates biological instinct to protect her young. This situation opens up a fascinating debate concerning the xenomorph species: how much complex thought are they capable of performing? Do they understand that their actions are causing torture and suffering? And if Queenie is capable of storming a spaceship to avenge her dead children… does that really make her so different from Ripley?