Warning: count(): Parameter must be an array or an object that implements Countable in /homepages/45/d96662078/htdocs/clickandbuilds/TheBackseatDriverReviews/wp-includes/post-template.php on line 316
↓
Home→Comedy→Weekend Movies: Five Reasons to Watch Top Secret!

The world needs more spoof. Considering that banks are crashing and governments are in disarray, we could all use something funny. Something stupid. Something that will turn that frown upside down. It’s time to break out the 80s gem from directors Jim Abrahams, David Zucker and Jerry Zucker. I’m talking of the 1984 musical/spy movie Top Secret! Here are five reasons to check it out this weekend. 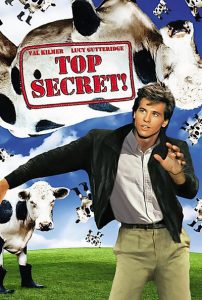 #1 – Val Kilmer being a goofball

Is Kilmer known for being difficult? Oh Christ yes. Frankly, with the stories out there, I’m more than a little surprised that he can still get work (I didn’t say it was quality – I said it was work). That being said, he is funny as hell, and excels at comedy. The deliveries are the best: deadpan and earnest expression with the most ridiculous stuff coming out of his mouth. Speak of the devil…

An American pop star versus the East German government. Yes, that’s the plot. NATO is in danger and a foxy member of the resistance needs saving. Kilmer’s Nick Rivers has to sing his way out of many situations, and… it’s beyond dumb. It’s preposterous. Which means somewhere in the world, Justin Bieber is making sure the good work of the United Nations is getting done by posing as a double agent. I’m not discounting anything right about now. 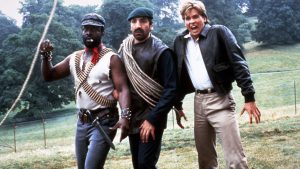 Really, you need to see this to believe it.

#3 – The throwback to Elvis

I LOVE Elvis. He’s the King. Anyone who ate fried peanut butter and banana sandwiches is okay in my book (really, it’s no mystery why The King is no longer with us). His movies are actually a really good time. Jailhouse Rock, Blue Hawaii and Viva Las Vegas are among the best. This movie is a great throwback to those films – the right amount of singing for someone who hates musicals. I’m willing to make an exception for Elvis, and Nick Rivers is a great caricature of this tradtion.

Again, with the earnestness, the completely dumb lines become a thing of beauty. I won’t spoil much if you haven’t seen it, but really, it features some of lines of beauty. Heh. 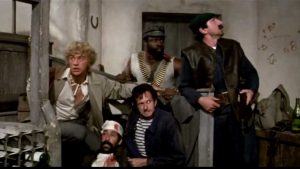 You have to understand, it went from 50 degrees to 85 degrees in Rochester. It’s finally summer after waiting for spring to arrive. So let’s celebrate with a fun, goofy beach movie. Despite that it’s a spy spoof, it’s a beach movie at its core. So embrace that, because we’re lucky enough to have sunshine.

Top Secret! Is available for rental on Amazon video.