Warning: count(): Parameter must be an array or an object that implements Countable in /homepages/45/d96662078/htdocs/clickandbuilds/TheBackseatDriverReviews/wp-includes/post-template.php on line 316
↓
Home→Insane Theory→From Ripley to Mother: Sigourney Weaver and The Boomer Trajectory

Like many girls born in the ‘70s and ‘80s, I grew up thinking that Sigourney Weaver was the absolute shit. Oh how I loved watching that woman kick ass and take names – it was something so inspiring to see in an era that was actively fighting Murphy Brown being a single mother. Dare I say that this woman’s strong persona became a role model to me and, I suspect, many other girls. Weaver became the face of badass women, which we then watched turn into Riot Grrls and girl bosses. She was one of the faces of that revolution. But then, something interesting happened in the past decade. Sigourney, like the rest of us, grew older and evolved. And she turned into something that strikes some fear into our hearts: she became a Baby Boomer who achieved commercial success and went from taking on roles that fight against the status quo to becoming part of the machine. 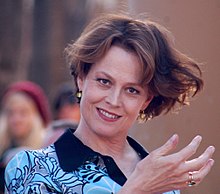 Who are we kidding, I still love you.

The association of Weaver as Ripley carried over into her persona and other roles. In the Alien franchise, we watched her go from Ripley the survivor to Ripley the warrior mother to Ripley the self-sacrificing hero. This evolution was something we only previously witnessed male characters undergo over the course of multiple films, marking her as both an equal and a revolutionary. She had to go from masculine to maternal to full-on spiritual action hero at a time when other women were happy to be The Love Interest (I’m looking at you, Meg Ryan). The role was both inspiring and groundbreaking, and lead to people embracing her other roles, such as Dana Barrett (aka the woman who doesn’t take Bill Murray’s crap) in Ghostbusters to ride-or-die environmentalist Dian Fossey in Gorillas in the Mist to everyone’s favorite bitchy boss pre-Miranda Priestly in Working Girl. 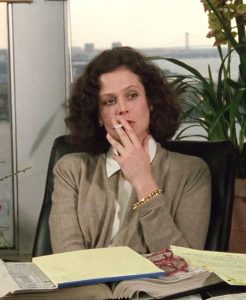 In the late 90s, Weaver started shifting to poking fun at herself, which seems pretty good-natured at first. 1999’s Galaxy Quest is a fun romp into the life of a science fiction babe that never quite outran the reach of the show. We giggled because it was so meta: with the blonde hair and the breasts for days, she attempts to bring dignity to a role that’s meant to objectify her, and we wind up respecting the character who can’t escape her character. Pretty heavy, man. She went on in 2001 to play one half of a mother-daughter con team in Heartbreakers, marrying the crafty criminal with the sexy MILF everyone wanted. Then came her turn in Wall-E as the voice of the spaceship Axiom, making cheerful announcements that you, too, could have a free cupcake IN A CUP! She reached peak tongue-in-cheek performance in Finding Dory, where the title character excitedly screamed her name over and over again to the pre-recorded narration at an aquarium. There’s resistance and enough self-awareness to rip on the icon she’s become: the badass who essentially is winking at us from her minivan. 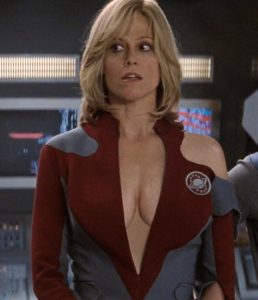 And in other news, we call this Tuesday.

But there’s something that we can’t quite shake. Weaver turned in a last-minute, impactful performance as the director of an underground organization seeking to satisfy the old ones in Cabin in the Woods, urging a young woman to die for the sake of humanity. She claims that she’s there for the good of humanity, offering the young woman dulcet, sage-like advice that certain death will mean the continuation of life on Earth for the entire human race. The emotions felt at this role range from slapping your leg in response to the clever casting to feeling yourself lulled by Weaver’s plea for sacrifice. However, this role is exactly the sinister bridge that we’ve hit in society right now: the adult who fought for us, who showed us how to be independent thinkers, who strove for credibility and equality, is suddenly asking someone young and naïve to die for the good of the people. As for Weaver? Her character gets to live in this scenario. She’s asking that someone else cash the cheque she’s written. In that instant, Weaver effectively transitions from Ripley to the embodiment of Weyland-Yutani. She’s no longer on our side, showing us how to fight against the evils of corporate America – she’s become the corporation. These roles transition her to the top of the food chain, and the points of humor, which we find charming, lull us into a false sense of security. Sure, it’s great that she can put on a nice suit dress in Cabin in the Woods and play the bad guy, and it’s funny that she’s the cheerful announcement voice of a spaceship in the future when she played freaking Ripley in the past, but these roles are designed to make people feel safe while ultimately manipulating someone else. They violate the trust we built with the badass for self-serving gain. 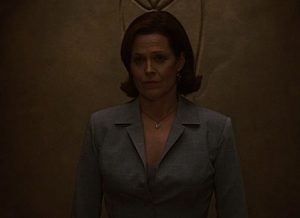 “Give of yourself so that I can be in the sequel.”

So is this a statement on the whole scenario with the Baby Boomer generation or what? On one hand, not every Boomer is a self-serving douche canoe – every generation has a group that looks out for themselves, and Generation X and the Millennials are not immune. On the other hand, let’s not pretend that half the damn United States hates the Boomer generation for destroying the environment and leaving them with a ton of student debt and a crappy economy while the world was their damn oyster. There’s no easy conclusion on this one, but the trajectory of Weaver’s roles has seemed to sharply indicate some low-key criticism. She’s gone from the face of the revolution to the comfortable mouthpiece that doesn’t have to worry about her next paycheck. She’s got it made in the shade, and we eat it right up because we’re giggling that Ripley is now Mother without realizing fully that a lot of people who fought in these revolutions reach a point of comfort and stop fighting. It’s clever, but at the same time, are we laughing because we don’t want to lose yet another hero? Or is she winking even more and providing further criticism? It’s up to you to decide.