Warning: count(): Parameter must be an array or an object that implements Countable in /homepages/45/d96662078/htdocs/clickandbuilds/TheBackseatDriverReviews/wp-includes/post-template.php on line 316
↓
Home→Horror→Go Into the Light: Stranger Things, Poltergeist and The Sage Female

I was going to write something about the atmosphere and scare style of Poltergeist in time for Halloween, but then I suddenly remembered that I made a promise some time ago (during my rambling about Stranger Things) to write something comparing Millie Bobby Brown’s Eleven to Zelda Rubinstein’s Tangina Barrons in 1982’s Poltergeist. *dramatic Robert Stack voice* This… is… that promise. 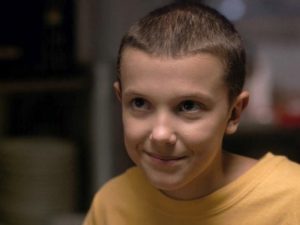 For months, folks have pointed out the similarities between Stranger Things and Poltergeist because, well, the latter definitely influenced the former. We’ve got Will Byers (Noah Schnapp) being spirited away to the Upside Down while his desperate mother Joyce (Winona Ryder) attempts to make nonverbal, supernatural content. We’ve also got the employees of Hawkins Laboratory tying metal rope around their midsections whilst venturing into the Upside Down. We’ve got spooky things aplenty. We’d be remiss, though, if we failed to mention one of the more glaring similarities: Eleven is a helluva lot like Tangina, from her appearance to her character to the delivery of lines. 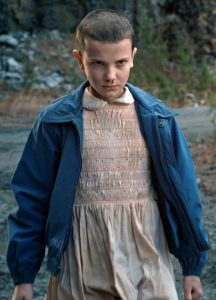 On the outside, the two female characters don’t appear to have much in common. Eleven is a child who’s implied to have been genetically engineered by some nebulous governmental branch. She has a shaved head, a quiet demeanor, and no idea of social grace or interaction. She struggles to make friends, and deceives the boys at one point to avoid harm to her friends. When the time for fighting comes, she fights ferociously and doesn’t back down. Tangina, on the other hand, is a 50-something diminutive woman with a mass of hair pile on top of her head. She’s flirty and sassy. Unlike Eleven, she puts Diane (JoBeth Williams) in danger to help get Carol Anne (Heather O’Rourke) back with a series of contradictions, first telling the scared mother that the dead go into the light, then having her instruct her child to do the same, and act that Diane takes as killing her child. In fact, she humoriously tells Diane, “You’re right. You go,” when the scared mother insists that she goes after her lost child herself. Eleven is guarded, somber and prone to acts of scared protection, whereas Tangina takes confident control immediately and announces her status as the bearer of information. The two don’t look so similar on paper. 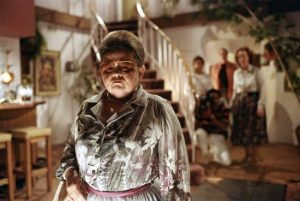 Sit down and shut up, spirits.

The similarities between the two are striking once you take a step back though. Eleven and Tangina both function as the sage figure in these pieces. Eleven has knowledge of the Upside Down, having connected with the Demogorgon during previous telepathic visits. She can tune in on Will’s singing using the frequency of the walkie talkie and her psychic abilities. Frequency is the key word here – Tangina directly tells other characters at one point, “Y’all mind hanging back? You’re jamming my frequency.” Eleven and Tangina both operate on a slightly different frequency than everyone around them – that’s how they’re able to communicate, locate and battle their respective forces. Both know about the Big Bad Wolves of their respective plots too: Eleven describes the Demogorgon to the boys, while Tangina explains the spirit world and the presence of the Beast. Both have to rescue a child that’s survived terrible odds in a world that exists on a different plane than their own. 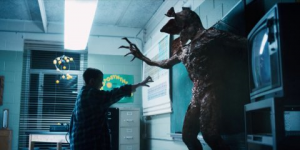 One of the best similarities between them are the snappy one-liners loaded with character. When the going gets tough, the tiny Tangina declares, “Let’s go get your daughter.” Eleven, when upset, refers to people as “mouthbreather” (and she is my forever hero for that). While Eleven sticks to monosyllables to communicate (like “friend’ or “Mike”), Tangina serenely tells souls to “go into the light”. Not the most amount of words, but both have the ability to create a lot of meaning lavished with care. It’s the words of these small women – one of whom desperately craves attention and friendship, the other engaged in a bid for spiritual rest – that touch both other characters and the audience alike. While the rest of the room moves, our eyes and ears are locked on them. When they speak, we listen intently for clues into a world we know nothing about. 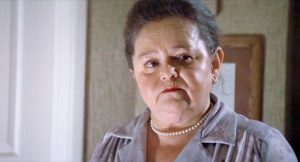 Can’t take your eyes off of her.

Eleven and Tangina both know how to face the evil that awaits them, and they know how to do it with style. They’ve got the psychic gifts, the heart, and the offbeat appearance. While everyone else is looking at Joyce freaking out, perhaps the best place to look for the Poltergeist reference of Stranger Things is the care and fight provided by the tiny bearers of truth and knowledge.s