Warning: count(): Parameter must be an array or an object that implements Countable in /homepages/45/d96662078/htdocs/clickandbuilds/TheBackseatDriverReviews/wp-includes/post-template.php on line 316
↓
Home→Mind blown→GUYS, THOSE WEREN’T PLOT HOLES IN DARK CITY

Ever have one of those moments where the facts suddenly align and you’re hit square in the face with a realization that completely changes your understanding of something? That happened to me recently. I was having a chuckle to myself at the expense of Dark City. Now let’s get one thing straight right now: I deeply enjoy this film’s vibe and execution, and it’s a fucking shame that Alex Proyas didn’t get the same career as some other directors out there. I love the plays on dark lighting and shadows, and I think he’s ahead of his time. However, I always sort of ripped on the issues of Dark City. That is, until I was standing in the shower recently and nearly screamed as it all hit me.

Rufus makes this look better than me.

Let me back up. A good year ago, I made a stink about the problems I saw in the film. Two of my four points: why on Earth would you pick a dead body as your vessel, and why on Earth would you pick a creature that’s composed predominantly of water when you can’t stand the stuff? It didn’t seem to make sense: the bodies will decompose, and the bodies are made up of the substance you dislike anyway. It’s not ideal. It’s quite the opposite of ideal. If you’re going to pick something to study, make sure it won’t kill you. Then again, as humans, we haven’t quite learned this lesson, because we keep trying to study stuff like volcanoes and snakes and cults – all shit that could make you very much dead. 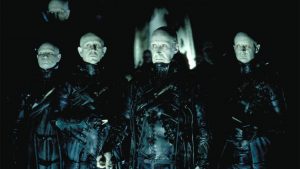 Except… studying that which could cause us to die is actually a pretty good method of figuring out how to outpace it and become a more robust survivor. Exhibit A: the mantis shrimp, which The Oatmeal describes with equal parts science and hilarity.  It’s gorgeous and has lightning fast death rods, and we’re currently studying it to create body armor for combat. From a murder shrimp, people – the kind of murder shrimp that can’t be housed in an aquarium because it’s been known to kill everything in sight and break the fucking glass. And we’re trying to learn from it to become better at survival. 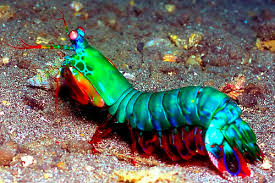 So, that’s one possible explanation for studying humans when you’re afraid of water. But what about the other stuff, like using a dead body as an organic taxi (can we call it a “consciousness mule”?) and being averse to light and moisture? The key word here is “moisture,” and if you don’t like it, go have some deliciously moist brownies, because this theory is pretty moist with thought.

Here’s the thing: what do you do with a dead body, per science, if you want to preserve it? You keep it the hell out of light, you keep it cold, and you make sure it’s not exposed to a ton of moisture (we’re not even going to touch embalming fluids at the moment). The longer you maintain these conditions, the longer you can keep the dead body preserved. Preserve it properly and it can last you quite some time. Which, if we’re looking at the conditions and circumstances of the Strangers, they’re doing: they stay hidden underground where it’s dark and dry, avoiding sunlight and water. They’re not just a group of beings that got lost on their way home from a Cure concert – they’re trying to maintain the bodies they’ve selected as their host. They make sure the apartment is properly ventilated and maintained so that it doesn’t break down into an unlivable mess. 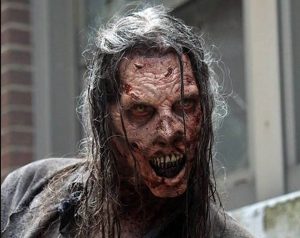 A body not stored in optimal conditions.

So, back to the larger question: why pick human bodies? Let’s look at all the cool stuff we can do versus the stuff that the Strangers, in their biological forms, can’t accomplish. As humans, we can walk, articulate through verbal language, lift heavy objects, go swimming, and sexually reproduce, to name but a few. The Strangers resemble some strange-looking jellyfish creatures that can’t handle light and exposure to air. When the Strangers are exposed to the outside world, they don’t scurry away – they wither and die within seconds. While one could argue that they most likely reproduce by fission, the limitations of fission pointing toward a lack of genetic variation when binary fission is factored in; mutation could cause evolution, such as with bacteria, but looking at their tiny gene pool, I’m not holding out much hope. With a human host, these creatures would be able to not only explore notions of sentience, but channel psychic abilities of the human brain. Noteworthy is the fact that these abilities are easily learned by John through his memories. These aren’t abilities that they solely possess – they simply know how to flip the switch, which Schreber teaches the very human John. The abilities are something humans can learn; it stands to reason that the Strangers need this human form for more than just hitching a ride – it’s a great manipulation tool. Once they can figure out how humans and Strangers can best intermingle, it’s live host time, and then they can keep producing brand new meat casings for generations, upon which they’ll imprint their consciousness and live forever.

LOOK at them – it makes perfect sense!

In other words, humans are the mantis shrimp body armor, and this test group of scientists sits around in their tin can of a submarine hoping that the structure doesn’t break before they can crack the code. They’re preserving their mode of transportation to better adapt for greater survival. It was in front of us the whole damn time, but we were scoffing at the strange plot hole. It wasn’t a plot hole. Alex Proyas wasn’t in 1998. He was in 2998.