Warning: count(): Parameter must be an array or an object that implements Countable in /homepages/45/d96662078/htdocs/clickandbuilds/TheBackseatDriverReviews/wp-includes/post-template.php on line 316
↓
Home→Hail to the King→Hail to the King – An Introduction 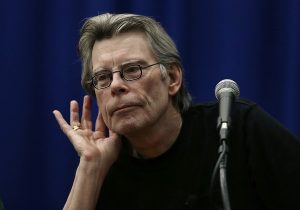 Why am I doing this, you may ask? Well I pose back to you, who do you think you are? My therapist? No, you’ll still take my calls…. Regardless, over the last few month after an annual re-read of IT, I finally decided to take the dive in to the wider Stephen King universe. It all stems from a desire to read The Dark Tower series. I’ve always understood that those books jump through a lot of King’s other work, so to get a read grounding in it, you need to be familiar with his other books. For many years I’d only ever read IT, it’s an all time favourite book and with how life is right now I have a lot of time for audiobooks. For the record, I haven’t started the Dark Tower series…. yet.

So, each month I will be dicussing a Stephen King book in its film/T.V. adaptation. In some cases, there will be multiple adaptations; I will almost always cover the oldest version (because laziness and I’m not watching that Shining mini-series or Carrie T.V. movie. But that remake of IT is out this year, so may do a bonus look at that if it’s any good.). The articles will (hopefully) drop on the last day of each month with a full run down of positives of the book, the movie, and the differences. Needless to say spoilers throughout for the subject and any other King works, as I will be pointing out reference where I can. These may mainly relate to IT because that’s the work I know the best. Could just research these connections online, but with reading a book a month – some of which will be over a thousand pages – while googling connections like I’m trying to solve the Kennedy assassination isn’t really on the cards.

The list won’t be available in advance as I’m not 100% sure on some points on the list and I want veto power if some of the books are terrible, talking like The Tommyknockers/Dreamcatcher levels of awful. But each article will conclude with a clue as to the next review because everyone is clamouring to know what poorly worded review I’m planning.

In summary, it’s a Stephen King book/movie comparison that’ll run for the next 12 months. Will it be good?  I don’t know. Will it get past 3 months before I forget ? Outcome looks uncertain.

Next Time: I can’t wait to read Fast Cars.