Warning: count(): Parameter must be an array or an object that implements Countable in /homepages/45/d96662078/htdocs/clickandbuilds/TheBackseatDriverReviews/wp-includes/post-template.php on line 316
↓
Home→Comedy→Weekend Movies: Five Reasons to Watch Ghost Team

In the throes of a cold that just would not quit (I’m referring to it as The Consumption of Late 2016), I caught the 2016 horror/comedy Ghost Team. Directed by Oliver Irving, it tells the story of Louis (Jon Heder), a copy shop owner that decides to investigate a rumored haunted barn with a rag tag group of helpers. While not perfect, it’s worth a watch over the weekend. Here are five reasons to check it out. 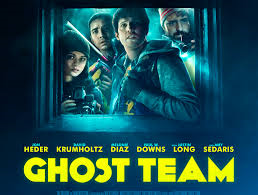 Jon Heder, Napoleon himself, is only the beginning. David Krumholtz – who I’ve loved since his epic cereal rant in Life With Mikey – is great as a man suffering in the bottom of a deep, dark depression. Justin Long is a too-serious security guard. The crowning glory, though, goes to Amy Sedaris. She plays a fake psychic that can’t muster the engery to pretend to care. It’s as great as it sounds.

This film has a particular sequence in it that is well-cut and pleasant to watch. When you step back and think about what it’s conveying, it’s meaningful as well as beautiful. I won’t ruin it, but you’ll know it when you see it. 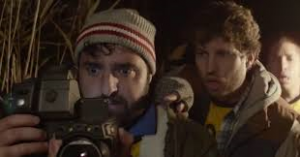 On camera, we can all hear you scream…

Half the fun of watching a paranormal show on T.V. is the way you can anticipate what’s going to happen. Someone is going to bump into something. There will be an odd noise that causes someone to freak out and start screaming. The team will spend hours sitting in the dark, speaking into thin air. You can totally predict every move, right down to finding something out of the ordinary. It’s fun because it’s familiar.

Yes, yes – it’s trite. However, it’s used over and over again because it’s funny and it works. This group – from the girl who works next door to the overzealous rent-a-cop to the wannabe techie – works well together. There’s enough of a common thread to where they can connect, but enough differences to make it punchy and funny. 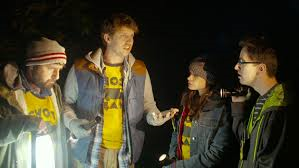 There comes a point where we need to make our own magic, whether it’s to avoid the truth or to put a little spice into our days. Some days, it’s a coping mechanism; other days, it’s something fun to pass the time. Whatever your reason is, know that you’re not alone. We all have something outside of ourselves. It keeps the imagination going, because without it, life can be a bit too harsh.

Ghost Team is available on Netflix. Head on over and give it a shot this weekend.