Warning: count(): Parameter must be an array or an object that implements Countable in /homepages/45/d96662078/htdocs/clickandbuilds/TheBackseatDriverReviews/wp-includes/post-template.php on line 316
↓
Home→Uncategorized→Hail to the King Vol 1 – Misery

“Misery is a book about cocaine. Annie Wilkes is cocaine. She was my number-one fan.”

Misery was first published in 1987, with the film adaptation following a few years later in 1990. It tells the story of novelist Paul Sheldon as he is saved/kidnapped by his “Number-One Fan,” the pill-wielding, short-tempered, dirty-birdy Annie Wilkes. 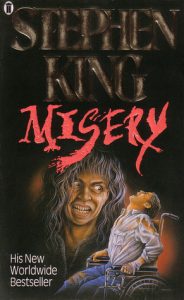 The main positive in the book is the ability to hear Paul Sheldon’s internal monologue, as it really helps the audience get on board with Paul. Starting off with his out-of-it flashes that open the novel, to the mild drug haze he enters as Annie begins to feed him pain killers, right through to the true horror of the situation dawning on him. It starts as being clear-cut as to what’s happening in the moment and what’s meant to be his memories, but as his situation worsens and the mania starts to consume him, that line becomes blurred. We get random phrases that are previously-explored memories mixed in with his narration of events.

Paul’s internal monologue helps to break up the main bulk of the story. This is in addition to the snippets of the novel within a novel, which is a book Paul writes for Annie after killing off Annie’s favourite character from his immensely popular “Misery” series. He tries to write a story of how Misery is resurrected, which juxtaposes Paul’s descent at the hands of Annie. We see Paul’s struggle with coming up with a story that doesn’t feel cheap or a cop out. This reflects the story we’re seeing play out: there are no easy outs for Paul, no acts of god or neighbour he can alert. He’s a character who is truly out of options and is beginning to fall apart, which is reflected in the increasingly worse for typewriter uses, which loses its keys as he loses appendages.

I really enjoyed the uncertainty throughout the book which is created through the reader constantly being with Paul. There isn’t really a scene that he doesn’t at least observe, which works well for putting you on his level. You feel the pain of his addiction and hunger. How at the mercy of Annie he is when she will disappear to her Laughing Place for days on end, not know when she’ll reappear or what mood she’ll be in. This extends right through the novel from the various ways Paul imagines he’ll be saved to the fact that Paul never actually sees Annie die, but more on this later. 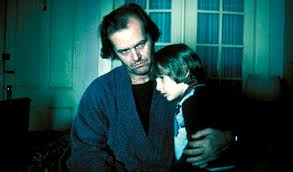 IT – Paul mentions his mother knew a Mrs. Kaspbrask, which refers to the mother of Eddie Kaspbrask, a member of the Losers Club that battles Pennywise the Clown in Derry and witnessed the leper on Neibolt Street.

The Shining – Annie mentions a guy going crazy up the road; as we know Annie’s house is located near Sidewinder, we can infer she is talking about Jack Torrance and his tenure as the winter caretaker of the Overlook Hotel. 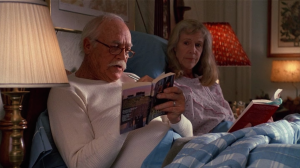 The main thing I enjoyed in the film is the B plot with the small town sheriff. His interactions with his wife as he slowly pieces together the mystery of Paul Sheldon’s disappearance are real joy to watch as he’s doing some good, old-fashioned detective work. We see him reading Sheldon’s “Misery” novels to try and understand him. As well as going out in the field and trying to re-enact what he thinks happened to the car. Richard Farnsworth really sells what is a very minor and much younger character in the novel, in to a really lovable role as you see him slowly put the pieces together what’s happened. His death is always really upsetting as it’s sudden and visceral. Every time I watch it, I know when he gets killed but how sudden it is cutting him off mid-sentence and seeing that great bloody wound is very impactful. It’s similar to the death of Scatman Crothers in the Kubrick version of The Shining.

On the opposite side of the coin, Kathy Bates is magnificent as the unhinged Annie Wilkes. A character who works very well on the page, it’d be easy for her to be almost a cartoon character on screen. Bates brings both the excitement and coldness that this role really needs. She sells the like Wilke-isms “Mr. Man,” “Dirty Birdy,” etc., effortlessly. I feel the colder side of Annie isn’t as present as it is in the novel and, and the film entirely skips out her Laughing Place. But that would’ve been more shoe leather as this story is told from a different angle. 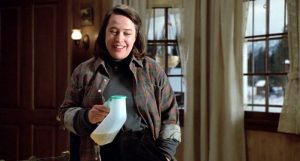 The real key to why this succeeds is the screenplay by William Goldman. Goldman knows exactly what this story needed and by adding the extra characters really broke up the story. The novel works as you follow Paul, but as the whole film couldn’t be entirely voiceover, he inserts extra piece that give the story a very clipped pace. 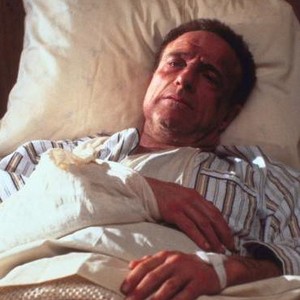 The main difference between the book and the movie is how Annie punishes Paul for trying to hide a knife. In the novel she shoots him up with painkillers and hacks off a foot. While this is bloody and extreme it plays as almost too melodramatic, as though she has decided to do this without thinking of the long term implications. Whereas in the movie, she puts a wooden block between his ankles and smashes them with a sledgehammer. This works much more effectively for me because we all know the pain of twisting an ankle; we can infer how much more painful a violent smash would be. In that scene you see what’s about the happen and see Paul realise just how fucked he is in that moment as he attempts to bargain with Annie. It’s a very raw moment of violence that’s made it in to the collective pop culture lexicon in terms of brutal acts on film.

Paul’s painkiller addiction is a huge part of the book, which is relatively glossed over in the film. Although we see him start to hide the medication, which leads to one of the cruellest bits of misfortune you’ll ever see a character go through, the novel really plays on this idea. For a good two thirds of the book Paul acknowledges how dependent he is on the painkillers, which is what initially drives him to escape the room in search of his next fix when Annie is away for an extended period of time. Addiction is a major theme in King’s work and it really helps you sympathise with Paul Sheldon as you see Annie has made him dependent on this medication in order to keep him prisoner. It’s reflected on how at times Paul’s mind will get rapid and knotted up when he is in need of the pills. 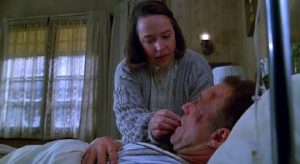 The character of Paul in the book is presented as a lot more flawed. We see him speak of his estranged daughter, the issues he has with his mother are shown through flashback, and on the whole he’s presented as a jerk. The humanity it brings to this guy who admittedly isn’t perfect being trapped in a horrific situation is really helps you sympathise with him even more. The film version, on the other hand, has a lot less time to show you how is before he meets Annie. You never really get an idea of the man he was, so the way he reacts to this situation is the only way we come to know him. This works when he’s main player in wider story, but wouldn’t if the film was entirely from his point of view like the novel is.

The character of Annie is very similar in both versions. The only thing the novel has over the film version is that in the novel we see a lot more of her mental health issues. We get a lot more of the sporadic up and down of her mood and temperament, whereas in the film is a pretty one to one comparisons with what triggers the shifts in her mental state. Her rants and constant use of Ned Flanders-level of made up gibberish is present in both versions. I really enjoy her talking about the serials she saw as a child and how she felt cheated and started ranting in the movie theatre. 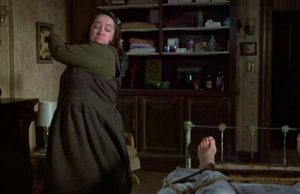 The ending in both version is similar, but lacking in a few key areas. In the book, Paul and Annie have a final showdown in the bedroom, Paul cracking her skull open with the typewriter and she takes off out the window. Paul never sees her die and we only hear after the fact that she died on her way to get the chainsaw from the barn. This is why Paul at the end is still completely broken and jumping at shadows: he never got that closure. The movie has a more satisfying ending as we see Annie crack her head on the typewriter and Paul has his moment of conquest. At the end we are given a note of hope that although Annie has never left Paul, he can deal with it.

Overall, I feel this is one of the strongest book-to-film adaptations. Although it has a few minor changes, the characters are intact and both serve to make the story both engaging and horrifying. I will say that the most horrifying part in both version isn’t the bodily violence, it’s when Annie has Paul burn the copy of his new book, Fast Cars. As someone who thinks they can put some words together and call it fiction, that scene really hurts.

Next time: We’re taking a trip up past Sidewinder for a unique position.