Warning: count(): Parameter must be an array or an object that implements Countable in /homepages/45/d96662078/htdocs/clickandbuilds/TheBackseatDriverReviews/wp-includes/post-template.php on line 316
↓
Home→Hail to the King→Hail to the King Vol 8 – The Stand

“…instead of a hobbit, my hero was a Texan named Stu Redman, and instead of a Dark Lord, my villain was a ruthless drifter and supernatural madman named Randall Flagg. The land of Mordor (“where the shadows lie,” according to Tolkien) was played by Las Vegas.” – Stephen King

In the wake of a plague, survivors band together to fight an evil force.

Frances Goldsmith: the thing I like most about Frannie is even in the darkest time, she can be silly. The best example of this is when they’re in the Boulder Free Zone and Larry is looking for Harold. She sees a dark figure outside her window and instead of being scared, she hits her leg on something and starts to laugh uncontrollably at the situation. She is by far King’s best-realized female character, as you go through an entire journey with Fran. From her discovering she’s pregnant, to losing her entire support network, to be trapped with fedora nerd/Ted Bundy wannabe Harold Lauder, to finding Stu, to finally having her baby, Peter.

Stu Redman is everyone’s favourite Watership Down-loving calculator factory worker. Of all the characters, Stu sees the powerless the old world in light of the superflu epidemic. From being trapped in the Stovington (go Eagles!) facility, he understands the fragile nature of chains of command. This translates into him becoming the eventual leader of the Free Zone. He’s the common man hero who miraculously (for a King book) isn’t a writer. He’s a survivor for himself and eventually for Fran. The entire last fifth of the book is him making it back to her with two broken legs and Tom Cullen in tow. The only thing I don’t like is that he treats Fran like property, making good with Harold saying he won’t “take his girl,” when she’s a human who can make her own choices. Larry Underwood is my favourite character in the whole damn book because he’s so relatable to me personally. His feelings of insecurity and faking confidence in some situations are really strong that the reader can latch on to. Of all the “chosen” people in this book, Larry feels the most reticent to accept the call. All the way through, the words of his mother haunt him (“You’re a taker, Larry.”), with the dental nurse screaming, “You ain’t no nice guy!” at him. Above all the other characters, except maybe Trashy, the scars of the pre-Captain Tripps world lay heavy on Larry’s shoulders. It starts off with his personality shift upon his first record being a hit, to having Wayne Stookey explain to him that the new world he thinks he’s found in a drug-fuelled party isn’t real. This carries over to Larry constantly hanging on to how things used to be. Even as New York City falls apart under the plague, Larry is searching for that sense of normalcy, which he thinks he has with Rita. When Rita dies, he transposes that on to the other women he meets: Lucy and Nadine.

Nick Andros is the man with the plan and vision for how things should be run in this new society. Despite the fact Nick can’t speak, he’s the most expressive character in the book. We first meet him having the shit beaten out him by some rednecks who he later comes to have domain over in the local jail as society crumbles. It’s his experience here that really shapes Nick, as he sees these me devolve from the superflu. It haunts him right up until the end. He understands how to shape a society and the best ways to achieve it. He was better than most of the Free Zone deserved: at every turn he’s helping people. Tom Cullen, Ralph, Mother Abigail – they all owe something to Nick and his good heart. Even to his very last moment, when the small council find a bomb in their meeting, it’s Nick who tells everyone else to run so he can try and defuse thing. He sacrifices himself for the good of the people and dies a hero. His death above all the others hit me the most, as it could have been avoided if Harold Lauder hadn’t been such a vengeful piece of shit. 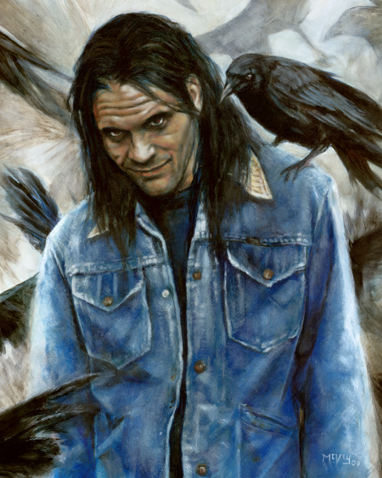 Randall Flagg, the Man in Black, the Walkin’ Dude, the leader of Vegas. Flagg is a great villain who runs through so much of King’s work, and it’s easy to see why he’s used so often. He is almost an elemental evil, a thing that always just was and has taken different forms throughout the years. This is explained when he mentions being a Klansman and various other violent, villainous figures throughout history. His influence over people shows how he assumes his place as the king of sin in Vegas, like how he recruits Lloyd Henreid, making him more intelligent and giving him leadership skills. He’s a telephone mast of crazy that Trashcan Man zeroes in on and utterly devotes himself to. He’s almost a romantic evil in that he plays the role of charming psychopath to a tee. He was always involved in Nadine Cross’s life, picking her as his bride from when she was young (which is super creepy). He ensnares Harold Lauder to betray the Free Zone at the mere knowledge that he exists.

Donald Merwin Elbert (Trashcan Man)… I feel so damn sorry for Trashy. Like all the characters in the book he is a prisoner to his past. In his case, it’s much more literal in that he was locked away in various mental health facilities for years, and is now facing the world with a lighter in one hand and no medication in the other. He’s plagued by memories of things that happened to him as a kid, even down to his name. The thing I like the most is his little nonsense sayings clearly have a much deeper meaning the reader won’t get, but it’s there in Trashy’s mixed-up head.

Harold Lauder, motherfucking fuck this guy. Seriously, this neck bearded, fedora-wearing, mens’ rights twat is maybe the character I hate most in literature. At least Flagg has an ethos and is outright in his cackling villainy. Harold is fucking coward who displays everything wrong with the male psyche. He is possessive of Frannie and when she doesn’t want a relationship with him, he becomes a fucking supervillain. It’s the shittest origin for a villain since Crazy Quilt. We see Harold devolve into an alpha male prick when the male population consists of just him. He becomes threatened when Stu Redman joins the group because Stu’s a functioning adult male and Harold is a fucking man-boy. Harold then proceeds to develop a serial killer-esque mask while all the time plotting the downfall of society because he was spurned by the woman he claims to have loved (but treated her poorly and she wasn’t interested in him). The biggest fuck you of all of this is when Harold has killed Nick Andros, in a move that made me put down the book for the rest of the day because if was so affecting. He runs away with Nadine in tow and starts grandstanding about how Flagg will reward him, only to suffer a motorbike accident (sidenote: Every character in the book LOVES motorbikes. Everywhere they go, they get on a bike and unless I missed something as to why they can’t use cars. This is a really odd quirk.) and be mortally wounded and abandoned by Nadine. When Harold is in his final moments, he writes an apology letter for all the wrong he did and signs it with the nickname some of the guys he worked with gave him: Hawk. The fact King allows Lauder to have such a cheap, last-second character reversal rings so false to me. Harold’s death frankly wasn’t brutal enough for all the terrible things he did throughout the story, and giving him a second second reprieve is some bullshit, Mr. King.

IT – They pass a certain bar called The Red Wheel, which is a favourite of Mr. Ben “Haystack” Hanscom and his bartender friend Ricky-Lee. Coins change hands there.

So I started this thing with some trepidation. Having tried several times to watch it before, this was the moment to do it. For science! Rather than got through what I thought of the entire thing, I’ll list things that occurred to me during each episode.

In conclusion, I fucking hated every moment of this miniseries. It took something I loved and… well you read my condensed and cleaned up ramblings.

The book made me want to adapt it i to a series of movies because I loved it so much. The miniseries made me lose the will to live.

Next Time: We all float.