Warning: count(): Parameter must be an array or an object that implements Countable in /homepages/45/d96662078/htdocs/clickandbuilds/TheBackseatDriverReviews/wp-includes/post-template.php on line 316
↓
Home→Horror→Weekend Movies: Five Reasons to Watch Seven

Can you believe that David Fincher’s Seven is 22 years old? It came out in 1995 and quickly became an iconic horror film. It was dark, it was bleak, and it did not care how we felt at the end of it. Here we are, 22 years later, still talking about it, still quoting it, still mildly afraid that Kevin Spacey is going to get rid of his fingerprints and come after us. Grab some popcorn and buckle in. Here are five reasons to scare the crap out of yourself and watch Seven this weekend. 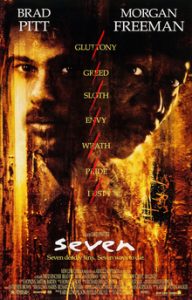 We’ve seen this plot before: grizzled African-American cop gets paired with a young upstart who’s slightly unhinged. Except in this case, Somerset (Morgan Freeman) and Mills (Brad Pitt) aren’t the buddies that Murtaugh and Riggs of Lethal Weapon become. Somerset has seen some shit, some very bad things, and he knows that Mills is an idealist at heart that wants to stop the bad guys. Somerset knows it’s not always going to be like that, no matter how hard you wish it to come to pass. Theirs is a dynamic that would happen in the real world, and frankly, that’s comforting. There’s no gloss or shine. Sometimes, the real world is a terrible place, and the dose of reality is welcome. Murtaugh and Riggs are fun, but Somerset and Mills are who you’d want on someone’s trail.

Oh good Christ, this is the stuff of nightmares. Somerset questions a man (Leland Orser, whose performance still scares me) who was forced to wear a knife-like phallus to rape a prostitute to death. Watching Orser freak out while clearly in shock over what he’s had to endure is uncomfortable to say the least. Best part? Fincher doesn’t have to show us anything in the way of gore. We see a picture of what Orser’s character was forced to wear. We never see what happened to the prostitute. We never get flashbacks to the act. We get a description of a man visiting a hooker, getting a gun shoved in his mouth, and being forced to fuck a woman to death with a knife. We see the trauma of the aftermath of what this man was forced to do, and our minds imagine the worst. We do the work for Fincher. It’s quite effective all this time later; I watch that scene and quietly tell my vagina that it’s going to be okay. 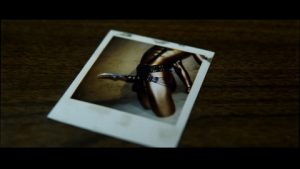 While my vagina gently weeps.

The parodies of this line are too numerous to count. However, parody is a pretty great indicator of how badly something scares us. We make fun of it in order to reclaim it when it comes to horror. It’s our way of taking back control. When we’re in the moment – and believe you me, those are some of the most tense four minutes of cinema you will ever watch – you’re sucked in and completely terrified. There are still people that swear up and down that you see Gwyneth Paltrow’s head to this day. How do we deal with something that large and scary? How do you chase the boogeyman? Same way you do with a boggart: you make it ridiculous and laugh at it. Hence all of the parodies and gags. It’s how we cope.

#4 – A look at uncertain parenthood

This reason is part of what makes the movie sing so much for me. Tracy (Paltrow) debates how to handle her pregnancy in an environment that makes her unhappy. I saw this movie just before I turned 15, and it was mind-blowing in this respect. I was sheltered and hadn’t been exposed to people debating whether or not to keep a pregnancy. To see a woman take an honest look at her environment, and to have her friend give her unflinching advice based on his experience with abortion, broadened my view of the world. It’s provoked quite a bit of thought over the years, especially when it’s come to my own family planning. Sometimes, you must look at the life you’re bringing someone into and ask if loving that person is enough. It’s difficult, but it’s a common enough experience that it must be respected. 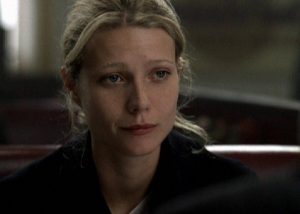 So glad I watched this before she became fucking insufferable.

#5 – I’m covering it over the next two weeks

Somewhere, a reader is moaning, “Oh, Erin, come on, that’s a cheap reason!” However, it’s not one week that I’m covering it – it’s two. If you can believe it, I’ve found a lot to say about this film. The next two weeks of analysis will be devoted to some observations and organic thought that’s stemmed from conversations (the staff here has been known to talk movies and theories from time to time, if you can believe that). So while it’s a cheap reason, I’d rather get you in the frame of mind for what we’re going to discuss.

Seven is available for rental on Amazon, if it’s not already part of your collection.