Warning: count(): Parameter must be an array or an object that implements Countable in /homepages/45/d96662078/htdocs/clickandbuilds/TheBackseatDriverReviews/wp-includes/post-template.php on line 316
↓
Home→Action→Hans-On Dad: John McClane As Masculine Ideal in Die Hard

Okay, if you want to smack me for the title of this article, go right on ahead. I deserve it. The pun is atrocious. In fact, I don’t blame you for walking out right here, right now.

Still with me? Alright, for those of you that stuck around, you know the deal: Die Hard is the best Christmas movie ever. It’s got everything you could possibly want: terrorism, guns, crawling through vents, sarcasm, Bruce Willis before he went full-on diva. Alan Rickman is a positively delicious villain, and in the 1980s, its theme of terrorism as a red herring for a bold robbery of millions – millions, I tell you! – provided some much-needed commentary on the subject of grandiose greed. However, there’s something here that often gets missed in terms of why this film is so appealing. Something that hides in plain sight: Willis’s McClane is, at his core, a good dad and a loyal husband. 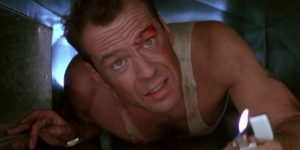 Husband and father of the year. Every year.

At first, it reads a bit like a plot device because, well, it’s a plot device. McClane is headed to Los Angeles from New York in order to reconnect with his estranged wife and kids. McClane is a tough cop that’s married to his job, and it’s placed an undue strain on his marriage; part of the issue stems from career-minded wife Holly (Bonnie Bedelia) forging her own identity amidst the more traditional backdrop of society, itself commentary on the divide between the desire for female autonomy and the steadfast cling to the perception of the ideal nuclear family roles. A cross-country move has caused this man to take a good, long look at what matters, and he wants sorely to reconnect with his wife and kids. So he buys the extra large bear, hops a plane and before you can say Bob’s your uncle, he’s on the West Coast and ready to play loving dad in a bid to prove to his wife and kids that he puts them first. 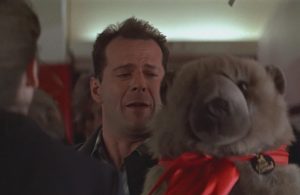 Who doesn’t want this bear?

But that’s not all; that’s far too easy. You see, unlike most dads out there, John gets to prove that he would go the distance to save his floundering marriage in the way that was most appropriate for the not-as-emotionally enlightened 1980s: brute force and physical endurance. Most guys would send flowers and try to take out their lady loves on a date that involves dinner, dancing and tickets to the opera (I smell Die Fledermaus). In the 80s, movies often centered around the need to become someone else: someone cooler, someone better dressed, someone who went from geeky zero to suave hero (Exhibit A: Can’t Buy Me Love). Not John McClane. Nope. John takes on German terrorists with his bare hands, becoming even more lethal once he has a machine gun (ho ho ho). He crawls through vents. He zings with one-liners – both verbal and written – in a manner that’s sarcastically endearing. As if that’s not enough, he literally walks barefoot over glass. Think about that for a moment: in attending a party in a bid to win the affections of his estranged wife, this man walks over glass in his bare feet.

Let’s be perfectly frank here: for anyone that’s gone through relationship trouble, you know how tough it can be to try to go the extra mile for your partner when things are rough. When push comes to shove, chances are likely that if you’ve hit the point of separation, you’re more likely to break up in the end than not. That’s most likely not the person you’re going to walk over glass for. It’s easy enough to get on a plane and try to sell a pitch that the family should be kept together. Get 100 shaky couples in Nakatomi Plaza, give them Hans Gruber, and tell them what they’ll have to go through for their partners; chances are, many of them will shrug and say, as nicely as they can, “Fuck this.” John, though… he gets to be the ideal in this respect. He gets to endure physical task after battery after duct after foot slice after shoot out. The man is a machine that cares about saving his wife, and, therefore, his family. 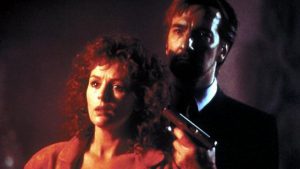 How does it go? Never gonna give you up…

You see, John McClane represents both an ideal family man and a good cop, and part of that is the notion that he would endure anything to keep the little guy safe. He’s a hero to the extreme. His dedication to cleaning up crime and not compromising his traditional ideals jeoparodized his marriage, so he wins it back by jacking up that behavior to the extreme. How can he prove that he’s right to Holly? By using brute force to save the day. Suddenly, his methods are totally justified, and in this moment, he’s exactly what we all need: he’s the man that can see the solution to the problem. He’s the tough guy that can take down the baddies. He saves not only an entire room full of people; he saves his wife’s colleagues from certain death. Imagine telling everyone at work that you dumped the guy that killed the terrorists that held everyone hostage on Christmas Eve. That guy’s someone you want to hang on to. After all, he proved how much he loves Holly by coming out to see her; it’s the action of defending her and, by extension, those around her in a bid to keep her safe. That’s a show of support for her life and career as well. It’s easy to construe it as the ideal actions of a man that’s a deep-down romantic: John McClane gets to kill for the woman he loves in order to prove that he’s the apotheosis of masculinity.

In the end, Die Hard manages to not only be an action film: it’s a statement on women’s rights, how men struggled with that transition, and how the romance can be re-injected into a flailing marriage through extreme displays of stereotypical masculine aggression. Do we need someone to place themselves into harm’s way for us? Not all of us do. But enough of us get the gesture, and let’s face it, we’d swoon if someone we loved kept us safe. Even if we weren’t in the best spot in our relationship. Proving once again that this film wears many hats and should be soundly praised.