Warning: count(): Parameter must be an array or an object that implements Countable in /homepages/45/d96662078/htdocs/clickandbuilds/TheBackseatDriverReviews/wp-includes/post-template.php on line 316
↓
Home→I hate people→I Do What I Want: The Troubling Premise of The Object of My Affection

I’ll be upfront: I dislike Jennifer Aniston. I have always found her annoying and cloying on Friends (itself a show that managed to hit at the right place and right time), and she carried over the lovelorn trope into her film career (I’m not going to get started on her personal life because that’s simply unfair). Still, it was 1998, and many of us went to go see her rom-coms because, well, we were still living in the Dark Ages (aka the Reign of Julia Roberts), and we were busy waiting for Fight Club and The Matrix to come out. So we trudged into those theatres and watched… a straight woman falling for her gay best friend, pining for him and making plans to raise her unborn child with him. 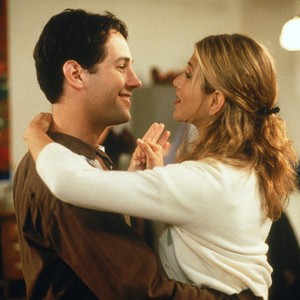 This is not a love story.

Oh the places I don’t want to go with this one. There’s a bit of everything in this plot. Nina (Aniston) gets a roommate in the form of handsome gay man George (Paul Rudd) after his boyfriend dumps him. Nina’s sister (Allison Janney, who hadn’t quite found her footing yet as C.J. on The West Wing) constantly tries setting her up with wealthy men, but she’s already in a relationship with Vince (John Pankow), a man who is pretty into her, kind, considerate, and excited as hell to be a father. Since she’s not that into Vince, pregnant Nina dumps him with the goal of raising her baby with George to create the best little family in Brooklyn. George, though… he’s still gay, and Nina wants so badly to be with him that she tries sleeping with him and throwing jealous fits when he meets Paul (Amo Gulinello), a man he rather normally starts dating. Things come to a head when Nina gives birth (see what I did there?), ultimately asking George to move out so that she can raise her daughter and heal from a broken heart. 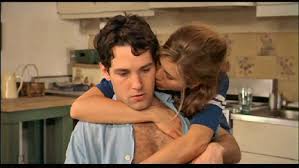 The two largest problems of this film stem from flawed thinking in Nina, the first of which is her constant pursuit of George. George is gay. Gay as the day is long. He is not attracted to women sexually. He does not want a piece of sweet poon tang. And yet Nina keeps trying to make it happen. How is the concept of not being into it that difficult to grasp? He does not feel sexual attraction to women. We’re not talking quantum physics. This is not tough to grasp, yet she keeps trying. It’s up to us to decipher if this stems from her feeling that she’s so special she transcends sexual orientation, or if she’s really so clueless that she has no idea how being gay fucking works. Either way, the situation presented is one that is so warped and unfair upon closer inspection with non-rom-com-tinted glasses. Gay people aren’t going to drop their pants and declare love for someone outside of their orientation. Just because you’re attracted doesn’t mean that the other party is going to reciprocate. That’s a messed-up situation in and of itself; adding to that is the notion of raising a child with this unattainable person upon whom you have romantic designs. You don’t try to raise a child in a romantic partnership where one of you can’t possibly fulfill the other. That’s a recipe for a divorce on a good day, and an acrimonious one at that. 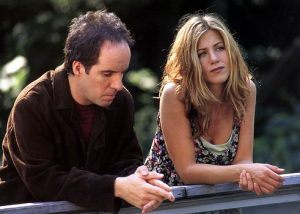 Don’t worry Vince. We’re getting to you.

Which brings me to my next point: the Vince issue. Vince is not a horrible guy. He treats Nina well, and when she reveals her pregnancy, he’s excited not only to be a dad, but to be doing this with her. Let me interpret this for people who have never experienced an ill-received pregnancy announcement: this is the ideal reaction. Not everyone gets that excited happiness, and I can’t tell you how much it hurts to either be alone or completely rejected when news that should be happy is met with anything other than support. Nina’s response is, frankly, horrifying: she tells Vince that she doesn’t want to raise the baby with him. Not that she’d like to co-parent, not that she’s hoping they can keep it civil for the child: she wants Vince out. She doesn’t want him in the picture at all. And that is, in two words, fucking wrong. You can’t just cut someone out of a child’s life because your relationship tanked. When you have a child, it’s not about you. It’s not like Vince was abusive and Nina was protecting this child. She was robbing this kid of someone who was happy of its existence because she had the hots for her gay best friend and couldn’t conceptualize raising a child cooperatively with a former partner. Is that a tough road? Yup – I live it with my ex-husband, yet we knew enough to get our shit together to raise our kids together because we recognize that the parent-child bond is more than just pride. It was at this point the first time I saw the film that I decided I couldn’t get on board Nina. I know too many people whose parents played games with them as kids because they wanted to “win” the breakup. Fuck that. If that’s your attitude, you don’t deserve to raise a child. You clearly don’t get what it takes to be a good parent. 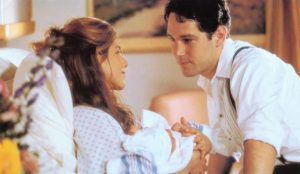 And yet this film serves as a time capsule for how twisted the thinking of the 1990s happened to be. Gay men and women were finally getting representation in film and television, though the stories that were being told centered more so upon the impact the gay friend had upon the straight protagonist rather than the thoughts, feelings and experiences of the gay individual him or herself. We still had a long way to go, and this film showed something that popped up in both Chasing Amy and Gigli: all you need is a good, old-fashioned heterosexual roll in the hay with someone of the opposite sex in order to realize that your feelings transcended your orientation. That’s insulting to anyone who’s ever had to explain, “No, this is me, and it’s not going to change no matter what.” Equally insulting is the notion this film fosters concerning the role of fathers. Dads are not interchangeable people, and mothers don’t always know best. I’ve known some amazing dads that have done it on their own, and some moms that can’t seem to get it together. Parenting goes beyond stereotypes, yet there’s this idea that only the mother gets to decide what happens to the child. That, my friends, is just as dangerous as telling a woman what she can and can’t do with her body. You don’t get to complain that you’re the only one doing things at home when you treat half of the equation as disposable. 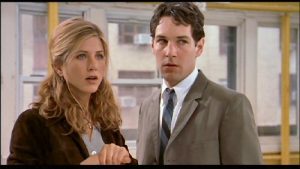 Don’t look so surprised. We all knew this would be a trainwreck.

If you want to change the world around you, start with your thinking. Gays won’t magically form heterosexual relationships because it’s what you want. Women, you aren’t the only parent. These aren’t tough concepts to nail down. Really, if you’re smart, you’ll avoid this film altogether. It’s such a messy situation that if The Object of My Affection was taking place in front of us in real time, we’d run fast and far.