Warning: count(): Parameter must be an array or an object that implements Countable in /homepages/45/d96662078/htdocs/clickandbuilds/TheBackseatDriverReviews/wp-includes/post-template.php on line 316
↓
Home→Emotions→If You Love It, Set It Free: Surrender in The Fountain

After nearly two years of being asked if I have watched Darren Aronofsky’s The Fountain, I have finally watched it. Somewhere, a Scottish man punches the air and doesn’t know why. Unsurprisingly, I rather enjoyed it, especially with the non-linear structure (for real, I can’t help but wonder if time isn’t linear). While Aronofsky is a fan of Jewish mysticism, there’s a deeply moving point of contention in the film, from which the main struggle emerges: the need to let go of what you love to truly join it on its journey.

Aronofsky jumps around a bit, so I’m going to offer my own two pennies’ worth on the order of things. While I normally dislike a stop at Exposition Station, I know that this film can be a bit of a mind-bender at times, and there are different interpretations. So here goes: Izzy (Rachel Weisz) is dying of brain cancer in the 20th Century, while her husband Tom (Hugh Jackman) obsessively researches ways to aggressively treat brain tumors. The goal: save her life and keep her with him forever. Izzy dies as his treatment – which involves the synthesis of the materials of a singular tree – successfully reduces a tumor in a chimp. While dealing with her impending demise, Izzy pens a story for Tom, about a queen sending her faithful conquistador to seek the Tree of Life as a means to restore the balance of an Inquisition-plagued Spain. Cut to 500 years later, where meditative monk Tom now fosters an ailing tree while hurtling through space toward eternal life on the faraway celestial body Xibalba. With me so far? Excellent. 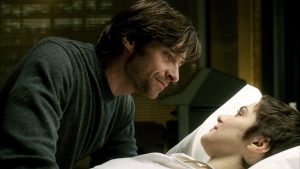 Here’s where we start interpreting the meaning of this final piece of the film: is the spaceman portion of the story meant to be a meditation for modern-day Tom, or is it meant that Tom actually managed to put a stopper in death? Both are equally viable. In the corner for meditation, we’ve seen Izzy marveling at Mayan artifacts in a museum, and the name of the nebula Tom’s traveling to is Xibalba, which has quite a few connotations concerning our old friend death. Xibalba is known in the Mayan culture as the place where the gods of death dwelt, which was overpowered by the Hero Twins; in essence, they overthrew the dark afterlife and unseated the gods that demanded worship. To have Tom keep moving toward the spot that is literally known as “fear place” means that he’s rapidly approaching the same trials and pain-infested confrontations the Mayans would have expected of the location; he’s headed toward his own psychic hell. From the uniform to his Enlightenment moment before death (and its close association with the planting of the seed on Izzy’s grave), this part could very well be a series of mental gymnastics for our grieving widower. On the other hand, we might be seeing our second option: the possibility that Tom has devised a way to cheat death in his never-ending quest to save his beloved wife. Tom’s zeroed in on a particular tree that has the tumor-reducing properties he needs, and he no longer has a terminally ill wife to keep him distracted: he can devote himself to “curing” death, which he views as a disease. The notion of Tom babying the tree throughout time and space fits perfectly: the tree comes to stand in as a surrogate Izzy, and if he can save the tree, he can save her and continue his quest against the painful inevitability of death. 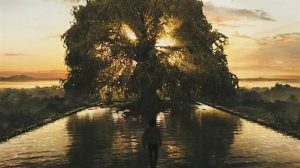 To truly join her…

Except for the fact that the act of death, once he accepts it, becomes a recycling of life, and therefore allows him to join his beloved on a more primal level. In all three iterations, we witness the invasion and rebirth of Tom and Izzy as a joint entity, albeit one that is not human. In Izzy’s story, the conquistador drinks from the Tree of Life (which… did that look like semen to anyone else? Anyone? Lone perv over here?) when he realizes that his queen had no intention of witnessing the fruit of his journey; the end result is that the conquistador becomes the new iteration of the tree, thereby bringing life to the entire world on a much more profound level. Present-day Tom plants seeds on Izzy’s grave, sowing the start of further life with the knowledge that one day too he will die. Future/meditation Tom is where it finally hits him: he’s got to accept that by moving on, he can fully experience what she does. The message here is lovely: death is not the end. Even if you can’t see it, something profound may be pouring out of you and into the world around you. To die is to truly surrender for Tom – in letting go of Izzy rather than selfishly and uselessly detain her in life, he’s able to release his own pain and join the larger act of creation she’s already accepted. It’s joining by someone’s side rather than holding them firmly next to you. 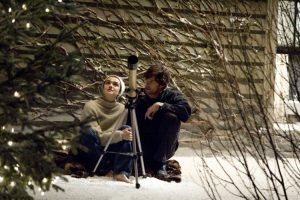 It’s not always about saving someone.

Death in The Fountain necessitates a sacrifice in each of the three stories, but they share a more profound common thread: in order to move forward, a death must occur. It’s up to our main character to make the important choice: surrender, or keep searching for ways to prolong the inevitable. At its core, this is a gorgeous statement on love and being as well as death: sometimes, in order to truly experience the full spectrum of emotion, you must be willing to let go of what you think you want and open yourself to the possibility of a third, greater possibility: that outside of the first two – the me and the you, the wants and the goals – there is the universal cycle of acceptance and synthesis. After all, unconditional love means acceptance regardless of circumstance. That includes shedding your own desires to become part of something bigger.